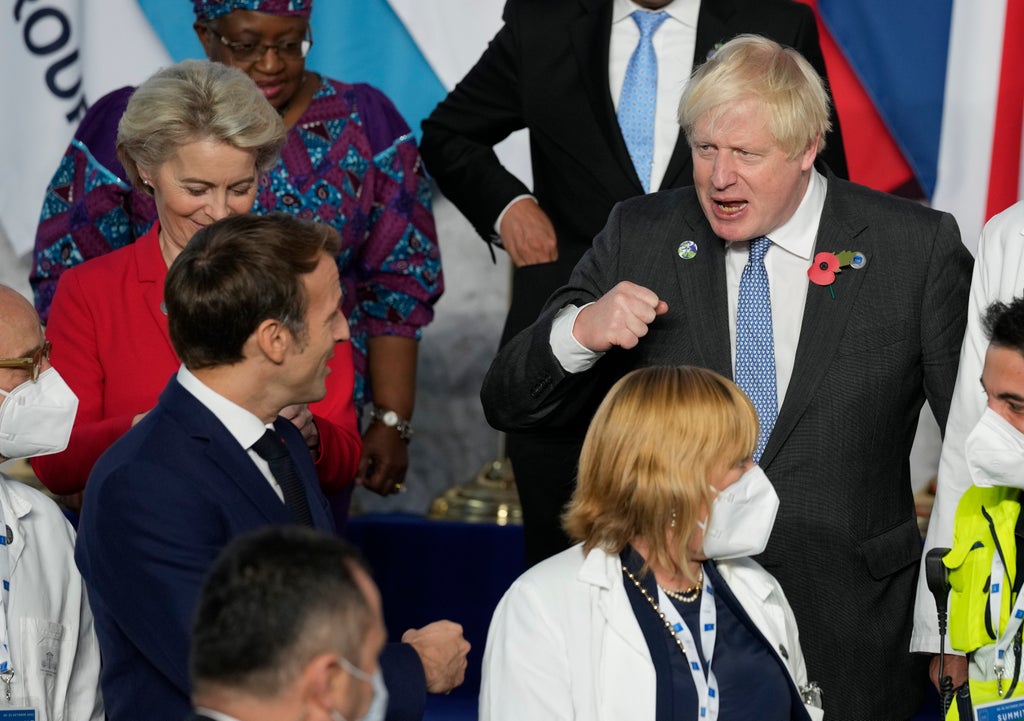 Boris Johnson will speak to French president Emmanuel Macron today about their nations’ ongoing fishing dispute, as France’s self-imposed deadline of Tuesday looms – when officials claim they will introduce harsher port restrictions on British vessels unless licenses are granted to all eligible French boats.

The pair are currently in Rome at the latest G20 summit, before they head to Glasgow for the long-awaited Cop26 summit. Downing Street said earlier in the week the tete-a-tete between the PM and Mr Macron would be a “brush-by” meeting, leading critics to brand the fight a distraction from Mr Johnson’s priority of lobbying other leaders for climate action.

It comes as Brexit minister Lord Frost revealed last night the UK is “actively considering” triggering a legal battle with France over the fallout.

Ministers have warned of retaliatory measures if France presses ahead with its proposed sanctions, and Mr Johnson did not rule out the prospect of beginning legal proceedings against the country – hinting at sending the dispute to independent arbitration – in a series of interviews over the weekend.

Some cladding news now. Troops in Britain are reportedly still being housed in high-rise buildings with flammable cladding, more than four years after the Grenfell Tower disaster.

The Ministry of Defence (MoD) said 755 buildings with sleeping accommodation in the UK are either fully or partially covered in “combustible” cladding.

Of those, 27 are high rises – defined as six floors or above – and remedial work has started on just one, with investigations still under way on the extent of the changes needed for the other 26.

The high rises are used for single living accommodation for personnel living on military bases in the UK, the MoD said.

Labour’s shadow defence secretary John Healey said the response from government to the Grenfell Tower fire “has simply been too slow and insufficient, with work still only started on just one of the 27 tower blocks”.

The June 2017 fire at Grenfell Tower, in west London, left 72 people dead. Some work has since been undertaken to remove unsafe cladding from buildings across the country following the disaster although concerns persist about the speed of that work.

Speaking of Cop26, you can follow the latest updates on our live climate blog as the summit finally gets underway.

World leaders and the media jave already begun arriving in Glasgow, with proceedings set to officially kick off on Monday.

Boris Johnson is due to make a final push to urge the wold’s leading economies to do more in the bid to cut emissions ahead of crunch climate change talks starting in Glasgow on Monday.

The PM, in Rome for the final day of the G20 summit, described Cop26 as a “moment of truth”.

He has spent the weekend pushing the message that developed countries need to move further and faster if they are to succeed in meeting the goal set out in the Paris Agreement of limiting global temperature rises to 1.5C.

He told reporters ahead of the climate summit:

“Cop26 will be the world’s moment of truth. The question everyone is asking is whether we seize this moment or let it slip away.

“I hope world leaders will hear them and come to Glasgow ready to answer them with decisive action.

“Together, we can mark the beginning of the end of climate change – and end the uncertainty once and for all.”

Brexit minister Lord Frost has revealed the UK is “actively considering” triggering a legal battle with France amid an escalating dispute over post-Brexit fishing rights.

Earlier this week, Paris threatened to introduce increased checks on British boats from its ports and a ban on seafood imports unless the issue over licences for small French vessels to fish in British waters is resolved by Tuesday, writes our political correspondent Ashley Cowburn.

Ministers have warned of retaliatory measures if France presses ahead with the proposed sanctions, and Boris Johnson did not rule out the prospect of triggering a legal battle with the country.

The post-Brexit trade deal includes a dispute resolution mechanism that allows controversies to be referred to an independent body if they cannot be resolved through diplomacy and direct talks.

Boris Johnson will speak to Emmanuel Macron personally today about the fishing row, in what Downing Street is calling a “brush-by” meeting, at the G20 summit in Rome.

It comes after the PM met with the European Union’s top official, Ursula von der Leyen, in person over the weekend to express his “concern” over France’s behaviour.

Mr Johnson is rumoured to have said he wants to reach a resolve before Cop26, so as not to distract from the climate crisis at the summit.

However, as yet, no resolution has been found.

Good morning, and welcome to The Independent’s rolling UK politics coverage. Stay tuned as we continue to bring you the latest updates in Britain’s ongoing row with France about fishing rights. Also, the G20 summit in Rome will come to a close today as world leaders ready themselves to head to Glasgow for Cop26.

Greta Thunberg Mobbed at Station Ahead of COP26, Not Invited