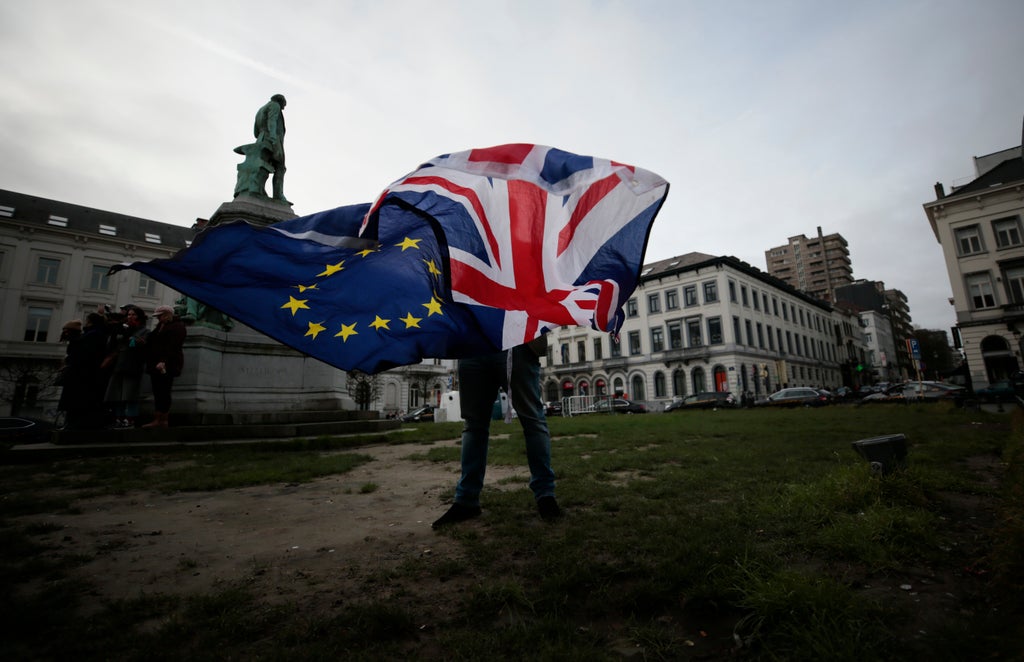 Cabinet minister Brandon Lewis has expressed confidence that the EU will agree to changes to the Brexit deal covering Northern Ireland, ahead of a deadline next week.

It comes amid reports that the EU is set to grant the UK an extension to grace periods on imported chilled meats – amounting to a temporary ceasefire in the so-called “sausage trade war”.

The UK marks five years since the Brexit referendum on Wednesday amid an ongoing row over trade with Northern Ireland.

Boris Johnson acknowledged the fifth anniversary of the vote by claiming it was his “mission” to use the UK’s new position in the world to deliver a better future for the British people.

However, there was embarrassment for the PM as millions of Britons were hit with the return of mobile phone roaming charges that are outlawed within the EU — ending one of the most tangible benefits of EU membership in recent years.

‘Negotiating sausages while the world burns’: Brussels can’t move on from Brexit – no matter how hard it triesThe real ‘Brexit dividend’? Minus £800m a week – and countingThe public is far from ready to ‘move on’ from the Brexit vote‘Stitched up and sold out’: UK’s fishing crews outraged at Brexit betrayal five years after referendum

Hello and welcome to The Independent’s rolling coverage of UK politics and the Brexit referendum anniversary.

Boris Johnson has released a statement to mark five years since the bitterly fought Brexit vote, which divided the country and led to years of domestic turmoil before the UK left the EU on 31 January 2020.

He has claimed leaving the EU will spur “innovation, jobs and renewal”.

The prime minister said in a statement: “This government got Brexit done and we’ve already reclaimed our money, laws, borders and waters.

“Now as we recover from this pandemic, we will seize the true potential of our regained sovereignty to unite and level up our whole United Kingdom.

“With control over our regulations and subsidies, and with freeports driving new investment, we will spur innovation, jobs and renewal across every part of our country.

“The decision to leave the EU may now be part of our history, but our clear mission is to utilise the freedoms it brings to shape a better future for our people.”

Brexit ‘opposite’ of what UK needed, says Heseltine

Lord Heseltine, the former deputy prime minister who is now president of the European Movement, has described Brexit as the “very opposite” of what the country needed following the pandemic.

“Five years on, Brexit is far from ‘done’. It has only just begun and the forecast is ominous,” he said.

“Storm clouds are gathering on the horizon, chief among them the threat to the Good Friday peace agreement in Northern Ireland.

“The fishing industry has now voiced its betrayal and the Australian trade deal will slowly erode the competitiveness of British farmers over the next 15 years.

“Meanwhile, the financial services industry quietly moves its activities to Europe in order to escape the continuing Brexit uncertainty.”

He told The Times Brexit was a “living animal” that was “done, in a way, but not done, in another way”.

“I think the worst way to respect Brexit is to keep fighting battles of the past, and to keep trying to score points on disputes of the past,” he said.

Five years on from the referendum and “we’re negotiating over sausages while the world burns”, Guy Verhofstadt, who was the European Parliament’s chief Brexit negotiator, has told The Independent.

The former Belgian prime minister, who is now chairing a conference on the future of Europe, said he despairs at the amount of political bandwidth Brexit still consumes for diplomats, MEPs and officials – and the effect of this on the cross-channel relationship.

“There is a direct line from the prime minister’s dishonesty over the deal he negotiated, to the instability we see in Northern Ireland today,” she said.

“The prime minister pledged never to put barriers down the Irish Sea and then a few months later did exactly that – this dishonesty is still having real consequences.”

The real ‘Brexit dividend’? Minus £800m a week – and counting

It was a vote famously won, at least in part, on money. “We send the EU £350m a week,” read the message on the side of Vote Leave’s battlebus. “Let’s fund our NHS instead.”

The figure referred to an estimate of the UK’s gross contribution to the European Union – in reality there was much more at play in the economics of EU membership, including money Brussels sent back to Britain and trade benefits.

So, five years on from the vote, what has Brexit really meant for the economy? Here is Ben Chu’s analysis:

A new poll has found that Britain remains split roughly down the middle over Brexit, five years on from the 52-48 vote to Leave on 23 June 2016.

The Savanta ComRes survey suggested that the UK would now vote to Remain in the EU by a majority of 51-49 per cent, but would reject the opportunity to rejoin by the same wafer-thin margin.

Less than a third of respondents (31 per cent) said that Brexit has been a success, with slightly more (34 per cent) branding it a failure.

And there was a clear majority (51 per cent) who believed the experience had left the UK more divided, compared to just 13 per cent who said it was more united.

Stars from Radiohead, Blur and The Chemical Brothers have joined a new campaign urging Boris Johnson to fix the touring crisis caused by his Brexit deal.

They are among more than 200 artists demanding help with the daunting barriers – costly visas and work permits, plus equipment red tape – that have “put one of UK’s finest exports at risk”.

The #LetTheMusicMove campaign aims to pile on pressure to end the stalemate and secure financial support for a sector reeling from the twin blows of Covid and leaving the EU.

EU vaccine chief: Brexit had nothing to do with UK’s speedy rollout

Thierry Breton, the EU’s single market commissioner who is also in charge of the bloc’s vaccination programme, has said Brexit had nothing to do with the UK’s vaccine rollout.

While acknowledging that Britain had led the way initially on jabs, he told The Guardian “that had nothing to do with Brexit” and said Boris Johnson’s government had since been “unable to boost production, and is dependent on the EU for over half its supply – and all its mRNA shots”.

He also said the UK looked “more and more isolated” and that while the aim had been to “take back control”, “what we see is pretty much the opposite”.

Here's Where Investment Banks Are Recruiting

Underutilized LMS Reports You Should Add To Your Weekly Checklist