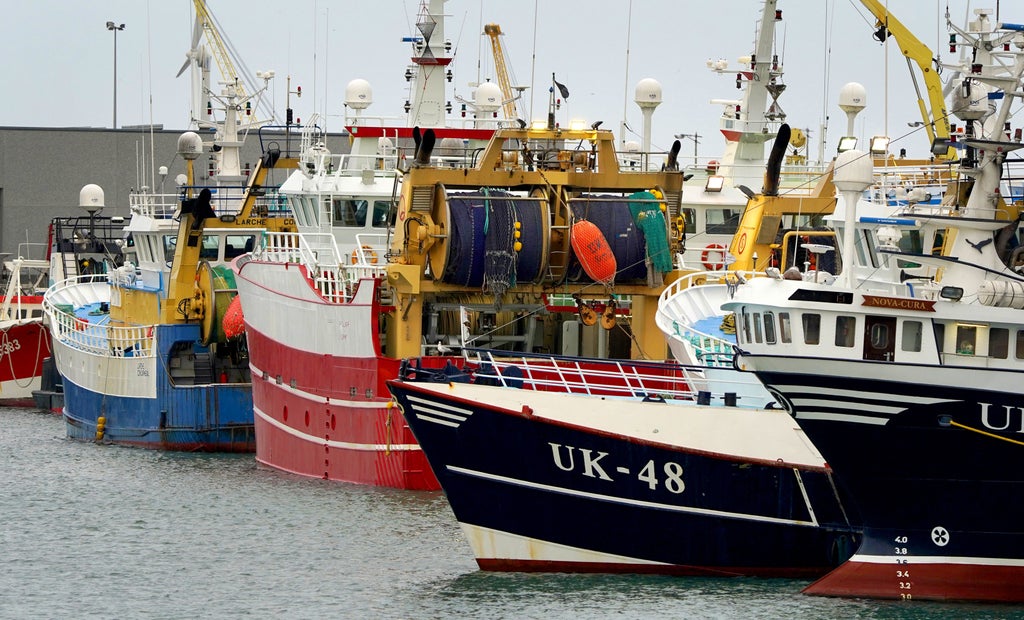 The PM has suggested the UK is poised to trigger a legal battle with France over the ongoing fishing dispute as early as next week.

Boris Johnson said he was “worried” Paris “may be about to become in breach, or is already in breach” of the free trade deal agreed between the UK and the EU, and left the possibility of escalating the issue on the table.

It comes after the French president suggested that the UK’s “credibility” is at stake, with Paris threatening to retaliate against Britain’s limited granting of licences for French boats.

Speaking to the FT, Mr Macron said: “When you spend years negotiating a treaty and then a few months later you do the opposite of what was decided on the aspects that suit you the least, it is not a big sign of your credibility.”

Paris is threatening to increase checks on British boats, stop them landing in French ports, slow customs arrangements in Calais and increase tariffs on energy bills in Jersey from Tuesday.

Threats over fishing rights between the UK and France ‘ridiculous’, says chairman of the French ports

Speaking to BBC Radio 4’s Today programme, Jean-Marc Puissesseau, President and chairman of the ports of Calais and Boulogne-sur-Mer, said there would be “terrible” consequences if France carried out its threat of blocking British trawlers from French ports.

Britain are currently granting licenses to “40 little boats” to fish in UK waters.

“I think it is a ridiculous point and I hope that the British will find an agreement, a solution to get out of this point.”

UK poised to trigger legal battle with France as early as next week, PM warns

Asked if he is “not ruling out that you might trigger the mechanism next week”, Mr Johnson told Sky News: “No of course not. I don’t rule that out.”

Mr Johnson added: “If another European country wants to break the TCA – the Trade and Cooperation agreement – then obviously we will have to take steps to protect UK interests.”

The by-election was triggered after the death of James Brokenshire, a former Conservative cabinet minister who died of lung cancer earlier this month at the age of 53.

Despite the clear Conservative lead in the constituency, Mr Tice told the Daily Telegraph he wanted to send a “powerful message to Boris Johnson” about the impact of the his government’s manifesto-busting decision to increase taxes.

“Though it is awful that this election is happening at all, I am standing to ensure that a choice is given to the people of Bexley and Sidcup,” said Mr Tice.

Food banks will have to ‘pick up the pieces’ after Budget, the Trussell Trust has warned

Britain’s largest charity of emergency food parcels has warned foodbanks will have to “pick up the pieces” this winter after Rishi Sunak resisted calls to reverse a cut for all universal credit claimants at the Budget.

Speaking to The Independent, Garry Lemon, the director of policy and research at the Trussell Trust foodbank group, stressed that among all the spending announcements on Wednesday “there just wasn’t enough for some of those in our society who need it the most”.

He added: “From the point of view of someone who represents food banks, I’m deeply disappointed by the Budget. Obviously it’s a welcome thing to see low-earning people being able to keep more of what they earn, don’t get me wrong, absolutely welcome that, but foodbanks are once again going to be left to pick up the pieces for people can’t work.

The world could be hurtling toward a new “dark ages” if it fails to confront global warming, the prime minister has warned as in an appeal to the world’s leading economies to do more to cut emissions.

“Civilisation could go backwards and history could go into reverse,” he said in an interview with Channel 4 News.

“Here we are in the Colosseum of Vespasian, the Roman Empire, they weren’t expecting it and they went into reverse. We had a Dark Ages.

“It’s important to remember things can get dramatically worse.”

Mr Johnson was in the Italian capital for a summit of the G20 leaders ahead of the crucial Cop26 climate change talks which start in Glasgow on Monday.

Chair of the Labour Party Anneliese Dodds described the move as “scandalous”, saying Mr Roberts “should have resigned as an MP the moment he was suspended”.

“That he is now set to return to the Conservative party shows they’ve let him off the hook,” she added. “Yet again, there’s one rule for Tory MPs and another for everyone else.”

Michelle O’Neill has hit out the DUP after their boycott of the North-South Ministerial Council, calling their “continued denial” of equality and rights “dead-end politics.”

Ms O’Neill said during her opening speech at the party’s Ard Fheis that the balance of power at Stormont has “shifted irreversibly” and the political unionist majority is gone.

“It is for the people to decide the next first minister, not the DUP. Sinn Fein is aiming to return as the biggest party, not for the sake of it, but to deliver change.

“[The DUP’s] boycott of the North-South Ministerial Council has been declared unlawful by the High Court.

“Their futile stunt to provoke outrage is in vain. Harking back to a bygone era of unionist rule is a lost cause too.”

Downing Street has said the Government wants to resolve the dispute with France over post-Brexit fishing rights but have declared they will “act in a calibrated manner” should Paris proceed with their threats.

The Prime Minister’s official spokesman said: “We have been working with the French government to issue more licences. We stand ready to continue that work.

“We have seen a number of comments from the French government at varying levels in recent days and weeks that we don’t think are justified.

“If France were to proceed with the threats that they have set out, we will act in a calibrated manner.”