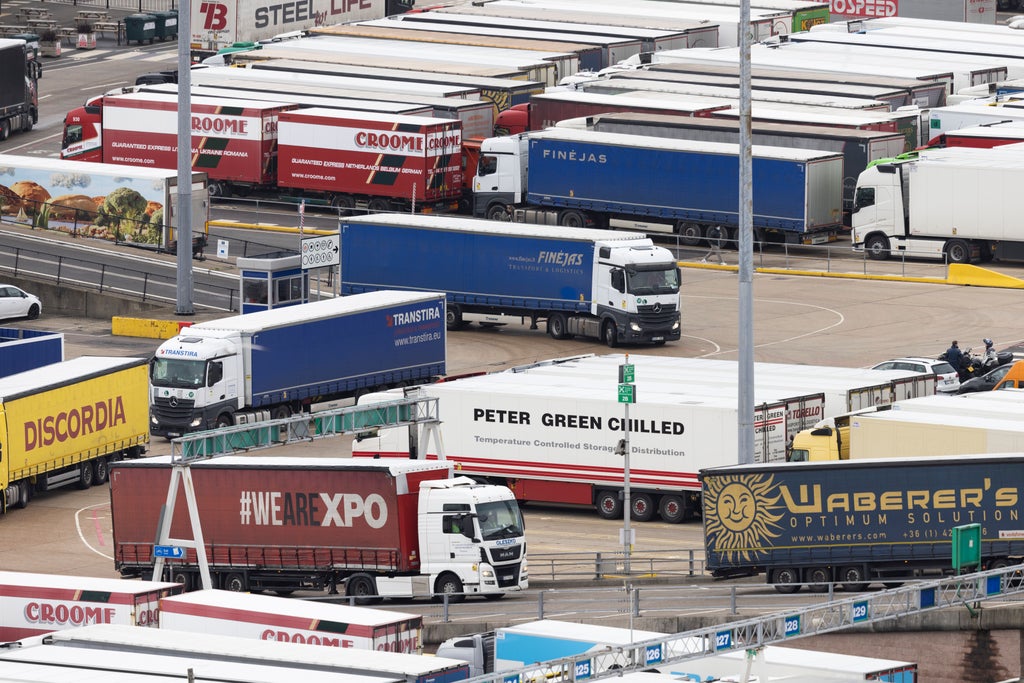 Brexit swiped £17bn from UK trade with the EU in just three months as new costs and red tape punished businesses, a spending watchdog has found.

Firms also filled in an extraordinary 48 million customs declarations and 140,000 export health certificates in the eight months after the UK left the single market and customs union, the National Audit Office (NAO) finds.

Its report raises the alarm over the government shelving import controls, warning it could face action for not “complying with international trading rules” – while UK exporters are put at a “disadvantage”.

But it also warns some of 41 ports needing upgrades might not have been ready if the controls had been introduced this year and that traders will still face “significant risks” when they are.

The verdict comes as the economic damage from leaving the EU becomes clearer – after the Office for Budget Responsibility said GDP will fall by 4 per cent, twice the loss from the Covid pandemic.

Since what Boris Johnson called his “excellent” trade deal came into force on 1 January, exporters have protested that the absence of tariffs is masking huge costs and barriers.

The NAO report agrees that – far from being “teething problems”, as ministers claimed – there are “extra burdens” both at the border and “elsewhere in the supply chain”.

The watchdog acknowledges it is impossible to fully “disentangle” the impacts of Brexit and Covid, but concludes EU withdrawal explains the crash in cross-Channel trade in quarter 2 of 2021, between April and June.

“Total trade in goods between the UK and EU was 15 per cent (£17bn) less in Q2 when compared with the equivalent quarter in 2018,” – the “comparator year” used by the Office for National Statistics (ONS), its report states.

In stark contrast, it notes that “UK trade with the rest of the world was up 1 per cent (£1bn),” over that three-month period.

On form-filling – after the Leave campaign promised red tape would be eased – the report warns traders face “additional declarations and additional checks” once import controls are fully phased in by July next year.

And it states: “Between January and August 2021, traders have made around 48 million simplified and full customs declarations on goods movements between GB and the EU and between the UK and the rest of the world.

“Between January and June 2021, certifying officers have signed off 140,000 Export Health Certificates (EHCs) for the movement of goods from the UK to the EU.”

Hilary Benn, the Labour MP who co-heads the cross-party UK Trade and Business Commission, said: “This report confirms what we have been hearing this year from businesses.

“Far from creating opportunities, Brexit has burdened firms with increased costs and labour shortages, as well as mountains of red tape and pointless form-filling.

“Lost trade means less business, fewer jobs and lower incomes across the UK, so what is the government going to do to remove the barriers to trade with our closest neighbours and biggest market that they have imposed?”

Tim Morris, chief executive of the UK Major Ports Group, called for “an immediate stop” to any other changes “so ports can complete facilities”.

“Without a common playing field of approach for cost recovery at border control posts, trade flows will be potentially distorted, risking overloading some routes and leaving new capacity underused,” he warned.

The ONS reported the slump in quarter 2 trade in August, but this is the first time the cost – £17bn – has been calculated.

The NAO concludes border preparations were “largely successful” in avoiding the predicted queuing chaos in Kent, but says this was partly due to pre-Brexit stockpiling, reduced trade because of Covid and the import control delays.

Gareth Davies, the head of the NAO, said: “Much more work is needed to put in place a model for the border that reduces the risk of non-compliance with international trading rules, does not require any temporary fixes, and is less complicated and burdensome for border users.”