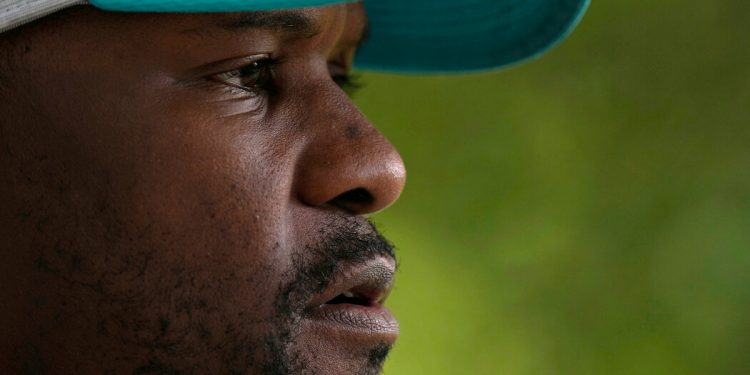 Brian Flores, who was fired as coach of the Miami Dolphins last month and was rejected for new jobs with other clubs, has sued the N.F.L. and its 32 teams alleging that they have discriminated against him and other Black coaches in their hiring practices.

His filing in federal court comes just days after the Giants, one of the teams he interviewed with for a position, named Brian Daboll, who is white, as their head coach.

Flores cited text messages he said were sent by his former boss, New England Patriots Coach Bill Belichick. In the messages, Belichick appears to congratulate Flores for winning the Giants’ job, which he had yet to interview for at that point. Flores responded by asking if Belichick had intended the message for Daboll, who interviewed before Flores’s scheduled meeting.

The respondent answered: “I think they are naming Daboll. I’m sorry about that. BB”

A Giants spokesman, Pat Hanlon, said in a statement the team was “confident with the process that resulted in the hiring of Brian Daboll” and that “Flores was in the conversation to be our head coach until the eleventh hour.” A Patriots spokesman said he did not anticipate that the team would be issuing a response.

The N.F.L. said it is “deeply committed to ensuring equitable employment practices” and “we will defend against these claims, which are without merit.”

The screenshots of a conversation purportedly initiated by Belichick, the notoriously tight-lipped coach, and as well as other anecdotes that paint an unflattering portrait of Stephen Ross, the Dolphins’ owner, provide a rare insight into the league’s business in a class-action suit that contends there is widespread discrimination in the N.F.L.

Flores is the son of Honduran immigrants to the Brownsville neighborhood of Brooklyn. He led the Dolphins for three years, including two winning seasons, and in the suit said he was “humiliated in the process as the New York Giants subjected him to a sham interview in an attempt to appear to provide a Black candidate with a legitimate chance at obtaining the job.”

In a statement, Flores said that he understood that “I may be risking coaching the game that I love and that has done so much for my family and me. My sincere hope is that by standing up against systemic racism in the N.F.L., others will join me to ensure that positive change is made for generations to come.”

In his suit, Flores stated that there were more than 40 other coaches who could join the class action, though he did not name any of them. Still, the case faces high legal hurdles, most prominently because Flores needs to prove that race was specifically a factor in his being turned down for jobs, even as he continues to interview for open coaching positions.

“I view this lawsuit as next to impossible to succeed and I’m extremely surprised he would put his career in jeopardy,” said Brad Sohn, a lawyer who has represented numerous N.F.L. players.

The N.F.L. has acknowledged repeatedly that there are not enough coaches and team executives of color even as about 70 percent of players are Black. Nearly 20 years ago, the league introduced the Rooney Rule, which requires teams to interview a diverse list of candidates for coaching and general manager positions.

The league has expanded and strengthen those guidelines since the rule’s introduction as the number of Black coaches has failed to grow appreciably, and fallen in some years. Yet the league still has only a handful of nonwhite men in head coaching jobs. With Flores’s ouster, Mike Tomlin of the Pittsburgh Steelers is the lone Black head coach in the league, while Ron Rivera of the Washington Football Team is the N.F.L.’s only Hispanic head coach. The Jets’ Robert Saleh is believed to be the league’s first Muslim Arab American head coach.

Black coaches have long complained that they are often called for interviews simply so teams can comply with the Rooney Rule, and that they were not considered serious candidates. Flores named other Black coaches he said have been discriminated against, including the former Colts and Lions head coach Jim Caldwell; the former Cardinals head coach Steve Wilks; and the former Texans head coach David Culley, who was fired last month after one season.

In his filing, Flores asserts that his experiences interviewing with league executives shows their callous approach to abiding by the Rooney Rule.

In texts exchanged on Jan. 24, three days before Flores was set to meet Giants executives, Belichick wrote: “I hear from Buffalo & NYG that you are their guy.”

Apparently aware that Daboll, who coached with the Bills this season, was also interviewing for the Giants’ opening, Flores asked Belichick whether he was referring to Daboll or him.

Belichick then apologized. “I double checked and misread the text.”

One of Flores’s lawyers, Douglas Wigdor, said that Flores reached out to their firm the same day he received the texts from Belichick. Wigdor’s employment litigation firm has represented numerous women who accused the film producer Harvey Weinstein of sexual misconduct, as well as former Fox News employees in harassment and discrimination cases. The complaint was filed as a putative class action, requiring certification from the court to proceed. Wigdor said his firm was currently investigating other claims from other coaches who could be part of the potential class.

Flores is still a candidate in the open head coach searches for the Houston Texans and New Orleans Saints. Wigdor said they wanted to move forward regardless of the outcome of those interviews. “We weren’t going to wait and be coy and see if he got a job,” he said.

Flores spent 15 years as an assistant under Belichick before getting his first head coaching job, but was interviewed as a candidate for other openings before being hired in 2019 by the Dolphins, where he had a 24-25 record in three seasons.

Before being hired by the Dolphins, Flores said he sat for what he called a “sham” interview with executives from the Denver Broncos. In that meeting, Flores said that John Elway, then the team’s general manager, and Joe Ellis, the team’s president, and others showed up an hour late.

“It was clear from the substance of the interview that Mr. Flores was interviewed only because of the Rooney Rule, and that the Broncos never had any intention to consider him as a legitimate candidate for the job,” the lawsuit states.

Not long after, the Broncos hired Vic Fangio, who is white, as their new head coach.

He was fired on Jan. 9 after three seasons in Denver.

The Broncos said in a statement that Flores’s claims were “blatantly false” and described their hiring process as “thorough and fair.” They added that the team planned to “vigorously defend” against his suit, citing detailed notes and records from his interview.

In the filing, Flores also singled out Ross, the Dolphins owner who hired him in 2019, claiming that Ross pressured him to “tank” the season, or lose all its games so the team would be in a better position to obtain the first pick in the upcoming draft.

Flores claimed that Ross said he would pay him $100,000 for each game the team lost in 2019, his first year with the Dolphins. Flores refused and when the Dolphins started winning games, Flores said he was told by the team’s general manager, Chris Grier, that Ross was “mad” that the team’s victories were hurting the team’s position in the draft position.

The Dolphins finished the season 5-11 and had the fifth overall draft pick, which they used to take quarterback Tua Tagovailoa. The Dolphins had two winning seasons after drafting Tagovailoa.

In a statement, the Dolphins said they “vehemently deny any allegations of racial discrimination” and that “the implication that we acted in a manner inconsistent with the integrity of the game is incorrect.”

The lawsuit goes on to state that at the end of the 2019 season, Ross pressured Flores to recruit a well known quarterback in violation of the N.F.L.’s tampering rules and that Flores repeatedly refused to comply. But in the winter of 2020, Ross invited Flores onto a yacht for lunch, then told Flores that the prominent quarterback was also arriving at the marina.

Flores said he immediately left the yacht and afterward was “treated with disdain and held out as someone who was noncompliant and difficult to work with.”