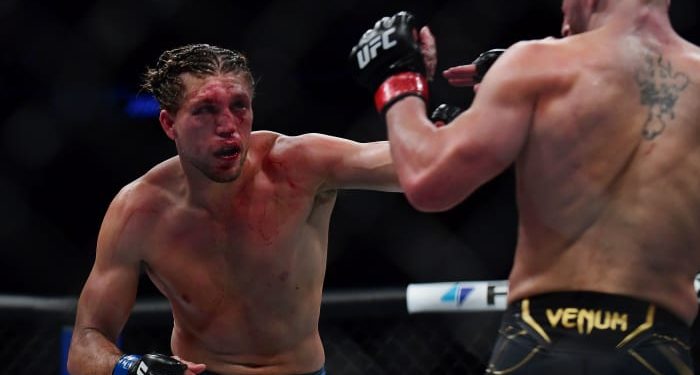 “I think it’s a great matchup,” Ortega told MMA Underground. “This is a war—like, no other way to put it. This is a war stylistically, from our culture, to everything.”

Rodriguez is one of Mexico’s top UFC fighters, currently sitting at No. 3 in the promotion’s official rankings. But as a child of Mexican immigrants, Ortega has always felt a bit of a kinship with “El Pantera,” so it wasn’t a fight he ever actively pursued. But with Ortega currently at No. 2 in the rankings, it’s a matchup that simply made too much sense not to book, and the winner will be in an enviable position when it comes to the next title shot in the division.
Scroll to Continue

“This is obviously someone who I didn’t want to face, and now we’re facing each other, you know, and it’s bittersweet, I guess,” Ortega said. “It’s bittersweet. One, I get another opponent who is No. 3 In the world, you know? I’m No. 2, so it makes sense matchup-wise, right? Who’s there? And I’m not a hater, man. If he does beat me, I hope he does get that title shot.

“This is one of those fights where it sucks. I’m in a weird position where I like the guy and I rooted for him, and now it’s like, ‘Well, I can’t root for you against me, though,’ you know? And he’s cool, man, you know? We’re not best friends, but we have a good relationship. We’ve hung out. We’ve partied together. We’ve done some cool stuff together, and sh-t, now we get to fight each other and entertain.”

“T-City” said the two knew the matchup was inevitable, and even talked about it once while hanging out with venture capitalist, social media influencer and rabid MMA fan Dan Bilzerian.

“It was awkward,” Ortega recalled. “We were hanging out, and we’re chilling at Dan Bilzerian’s house, and we’re doing these things, and I looked at him like, ‘Hey bro, you know we might fight, right? We keep pretending and going around the bush, but I’ve got nothing but love and respect, and when the day does come, let’s make sure we get paid.'”

That day is now upon us, and Ortega is shifting his mindset as the fight day nears. The two featherweights have combined for an incredible 15 performance bonuses during their UFC careers, so the clash seems destined to be exciting. Ortega is currently a small favorite at SISportsbook, but Rodriguez is dangerous every time he steps in the cage.

Ortega is putting his fondness for Rodriguez aside for one night, and he’s hoping the two can deliver an incredible performance that honors their shared Mexican roots, reminiscent of the famed boxing trilogy between Mexico’s Marco Antonio Barrera and Erik Morales, which produced some of the most legendary matchups in the sport’s history.

“Two Mexicans, top fighters, and you always see it in boxing—like Barrera vs. Morales or all these classics—and it’s like, I’m hoping that this is another classic, honestly,” Ortega said. “I love the fact that it’s Mexico, right, because together we’re making noise. I know that we’re fighting each other. We’re still united in this aspect, you know, where we’re bringing our people up and we’re showing that it’s possible – and from both sides of the story, one from him being in Mexico and being born and raised in Mexico, and me having to be first-generation born in the United States but to have immigrant parents.

“We’re showing both sides of the beauty of when you chase your dreams and you come from a background and culture and heritage and there’s no other way we’re going to live out there besides leaving it all in there. We have to dig deep to get out of where we came from, so there’d be a cold day in hell for both of us if we decide any of us are going to give each other an easy fight.”

Penultimate Sanfermines bull run in Spain concludes with no gorings