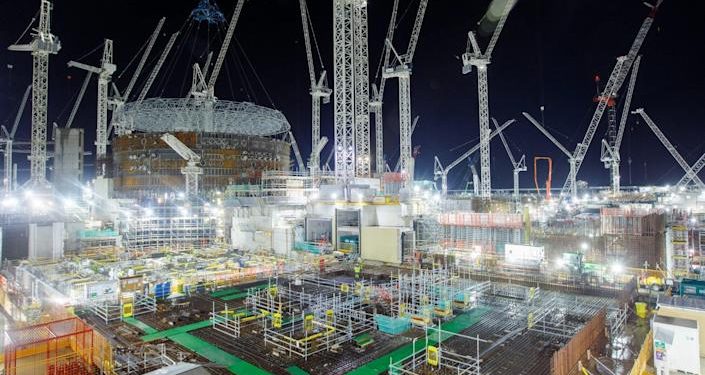 
Britain could build up to seven new nuclear power stations as part of a radical expansion of homegrown energy following Vladimir Putin’s invasion of Ukraine, the Business Secretary has said.

In an interview with The TelegraphKwasi Kwarteng said “there is a world where we have six or seven sites in the UK” by 2050 as part of a push for self-reliance.

Ministers have agreed to set up a development vehicle, Great British Nuclear, to identify sites, cut through red tape to speed up the planning process and bring together private firms to run each site.

As a first step, Boris Johnson is preparing to announce plans to significantly expand the existing commitment to back one new large-scale nuclear power station by 2024.

The Prime Minister and Mr Kwarteng have been battling with Rishi Sunak, the Chancellor, to secure funding for new plants – a row first disclosed by The Telegraph.

However, a meeting between Mr Johnson and Mr Sunak on Wednesday is said to have ended in agreement on expanding Britain’s existing set of ageing nuclear plants, all but one of which are due to be decommissioned by 2030.

The energy security strategy, due to be unveiled on Thursday, is expected to commit the Government to supporting the construction of at least two new large-scale plants by 2030 in addition to small modular reactors.

A government source said: “Nuclear will definitely look larger in the British energy mix by the end of this decade.”

Mr Johnson and Mr Kwarteng then want to more than treble the country’s existing seven gigawatts of nuclear capacity to 24 GW by 2050.

The Business Secretary acknowledged that in France, which now generates the majority of its electricity using nuclear power stations, “it has cost a fortune… but it has given them a measure of independence which is envied, frankly, by other people on the continent – by the Germans, for example, and the Italians”.

Separately, The Telegraph has been told that Mr Johnson used a round table with renewable energy firms last week to urge the industry to build a “colossal” offshore wind farm in the Irish Sea within 12 months.

The Prime Minister told industry leaders he has “a dream” that a giant floating wind farm could provide “gigawatts of energy and do it within a year”, according to a government source.

Nuclear and offshore wind energy are expected to be at the centre of the document being finalised by No 10. A separate row has been sparked by Mr Kwarteng’s push for a dramatic expansion of onshore wind farms following a moratorium imposed by David Cameron in 2015.

The strategy is expected to raise the prospect of relaxing planning laws in England to make it easier to build turbines on land but, in the face of significant opposition from ministers and backbenchers, Mr Kwarteng acknowledged: “Any movement has to have a large measure of local consent.”

His remarks appear to backtrack from his recent declaration that, while there “were quite understandable political reasons that people didn’t want to see large scale, onshore wind farms in their vicinity… I think that’s changed”.

Mr Kwarteng confirmed ministers are discussing possible incentives, such as reduced energy billsthat could be offered to people in exchange for agreeing to the development of a wind farm in their area.

Asked about the scale of the Government’s nuclear ambitions, he said: “There is a realisation across Government that we could do more on nuclear.

“With energy, you’re thinking maybe 30, even 40 years [ahead]. If we fast forward to 2050, there is a world where we have six or seven sites in the UK. That isn’t going to happen in the next two years, but it’s definitely something that we can aspire to.

“The Prime Minister said, in terms of the energy generation mix, we could see maybe a quarter of that being nuclear. I’d say 15 to 25 per cent. But obviously in the first three years you’re not going to suddenly have six new nuclear stations in three years. It’s physically impossible to do that.”

The Great British Nuclear delivery body is likely to be a government-owned company akin to HS2 Ltd, which is building the high speed railway line.

Asked which arguments he had used to lobby Mr Sunak for vast sums at a time when the Chancellor is resisting further public spending, he said: “I think it’s a long term thing. Also, we’re committed to having a vehicle which looks at this, and which actually can facilitate that, and I think there’s a measure of agreement on that.

“Obviously I don’t want to anticipate what’s in the strategy, but I think there is a realisation across government that we could do more on nuclear, and that’s why in the Prime Minister’s 10-Point Planwhich was published in November 2020, the third point was all about nuclear.”

Mr Kwarteng said that if the emerging technology of small modular reactors was successful, Britain could deploy up to 10 on one site to provide the equivalent output of a large-scale nuclear plant.

The Telegraph has revealed that a US energy developer linked to Elon Musk is in talks with the Government to build “hundreds” of small modular reactors across the UK.

Last Energy wants to build its first “mini-nuclear” power plant by 2025 and has identified a site in Wales. The company will invest £1.4 billion to build 10 reactors by the end of the decade.