Mike Lynch, the British tech entrepreneur, will this week begin his fight against extradition to the US, in the biggest test yet of whether British courts are willing to block the transfer of business executives to face American justice.

Lynch, 55, has been charged with 14 counts of conspiracy and fraud linked to the $11.6bn sale of his former company, Autonomy, to Hewlett-Packard in 2011.

One year after the purchase, HP wrote down the value of Autonomy by $8.8bn, and attributed $5bn of this to “accounting improprieties, disclosure failures and outright misrepresentations”.

Autonomy’s former chief financial officer Sushovan Hussain, a 55-year-old British citizen, was convicted in 2019 in the US on 16 counts of wire and securities fraud relating to the deal and sentenced to 60 months in jail and a $4m fine.

US prosecutors now want Lynch to stand trial in San Francisco. The entrepreneur, who is out on bail after lodging a £10m bond with the UK courts, denies any wrongdoing.

On Tuesday, when the extradition hearing begins at Westminster Magistrates Court, Lynch’s team is expected to argue that the UK, rather than the US, would be a more appropriate location for any prosecution.

In 2013, after longstanding concerns about the lopsided nature of the UK’s extradition treaty with the US, the UK parliament granted judges new powers known as the “forum bar”, which allows them to stop extraditions in the interests of justice if a large part of the alleged criminal activity took place in the UK. 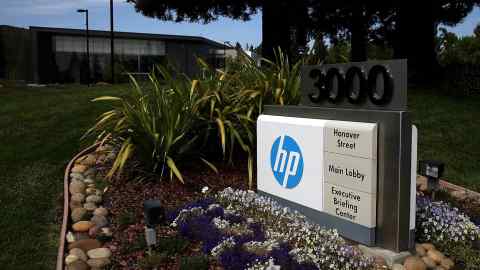 In 2006, US prosecutors caused a storm in the UK when they extradited three former NatWest bankers to face criminal charges linked to the collapsed energy company Enron, even though the UK’s Serious Fraud Office had declined to prosecute the case.

Autonomy was founded and based in Cambridge, and listed on the London Stock Exchange. In 2015, the SFO dropped its investigation into the case, saying it had ceded control of parts of the investigation to the US.

District Judge Michael Snow, who is hearing the case this week, does not have to decide Lynch’s guilt or innocence of the charges but merely whether the case meets the legal criteria for extradition. His decision is also subject to an appeal.

Edward Grange, partner at law firm Corker Binning, said that if Lynch was successful, it would show that British courts were “sufficiently robust to stand up to the continued over-reach of US jurisdiction”. The forum bar defence was not seen as a strong one until 2018 when a court stopped the extradition of computer hacker Lauri Love because much of his alleged activity had taken place in the UK.

Grange added that the case had concerned many UK executives, who feared that the “fallout from business deals” could see them “being hauled before US courts many years later”.

However, he noted that if Lynch avoided extradition, the US might increase its pressure on UK prosecutors to investigate more complex cases. “It could cause the DoJ to say that if the courts are not going to extradite suspects then domestic law enforcement agencies are going to have to step up,” he said.

Lynch’s status as one of Britain’s highest-profile tech executives has put pressure on the government to intervene. Last month five former cabinet ministers wrote to The Times newspaper warning that the government had “surrendered sovereignty” over extraditions to the US.

However, prime minister Boris Johnson has so far refused to become involved, despite suggesting last year that the UK-US extradition treaty was “unbalanced”.

The extradition hearing will adjourn on Friday to hear the conclusion of a separate civil case in the High Court, where Hewlett Packard Enterprise (HPE) is suing Lynch for fraud over the sale. Lynch has again denied any wrongdoing.

Meanwhile, one of Lynch’s biggest investments, the cyber security company Darktrace, is considering a possible initial public offering this year. Court documents in the US show that Darktrace’s chief strategy officer Nicole Eagan, and Vanessa Colomar, a partner at Lynch’s investment firm Invoke Capital, have given voluntary interviews to the FBI in connection with the US criminal case against Lynch.

Lynch did not call upon Eagen or Darktrace executive Andrew Kanter, who was Autonomy’s general counsel, to testify on his behalf in his High Court case, where he accused HPE of “buyer’s remorse” about its decision to buy Autonomy.

What happened to The Weeknd’s face at Super Bowl 2021 halftime show?