Britney Spears Calls Out Justin Timberlake Over Cry Me A River! 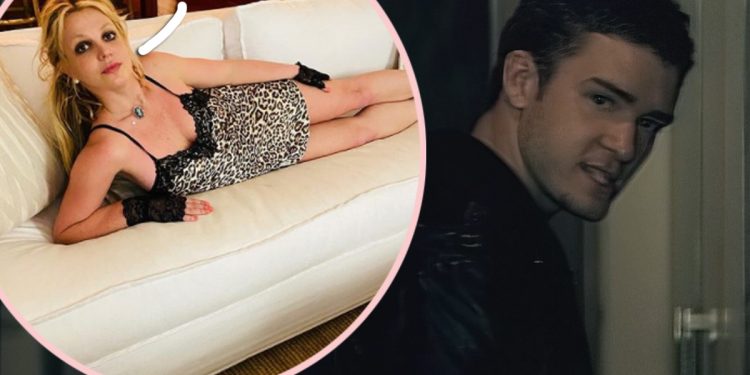 
And now, a reading from the Book of Britney…

Britney Spears took to Instagram on Monday night to let the world know that she’s very disappointed with Justin Timberlake — and Jesus Christ apparently is, too!

The unexpected sermon of sorts came alongside a photo of the Toxic singer showing off a new polka dot dress, all to the tune of Dusty Springfield‘s Son of a Preacher Man. The Grammy winner started the caption by blasting her mom Lynne Spears for taking advantage of her for “fame” and “attention” — a criticism that’s sadly par for the course on Brit’s ‘Gram these days.

But the superstar unexpectedly put a new target in her cross-hairs elsewhere in the caption: a certain ex-boyfriend who may or may not have sullied Britney’s good name on his debut album!

Related: Britney Praises Euphoria For Helping To Make Her Anxiety ‘Go Away’

The since-deleted post began on a biblical note. The songstress wrote:

“Ok … so I like my new dress. Pssss guess what???? I had a calling last night from Jesus and you know what he said??? ‘Dear child … your mom had a serving with her book at the exact time when you needed her most… all for WHAT?? FAME and ATTENTION!!!!”‘

Jesus didn’t stop there, according to Britney. The caption continued:

“[Jesus said,] Your ex did the same thing … he served with his first album using your name claiming you did him dirty!!!”

That Jesus, always stirring up drama!

The mother-of-two didn’t mention JT by name, but she didn’t have to, as it’s common knowledge the *NSYNC member put a Brit lookalike in the heartbreaker role in his 2002 music video, Cry Me A River.

Justin never confirmed the song was about Britney, but the fact that it was released right after their 2002 breakup spoke volumes. In his 2018 memoir Hindsight, the singer recalled feeling “scorned” and “pissed off” while writing the song, telling readers:

“I wrote ‘Cry Me a River’ in two hours. I didn’t plan on writing it. The feelings I had were so strong that I had to write it, and I translated my feelings into a form where people could listen and, hopefully, relate to it. People heard me and they understood it because we’ve all been there.”

The lyrics of the single appeared to suggest Britney cheated on him, and while Justin never confirmed any of it was true, he was undoubtedly more than happy to let the world cast his ex as the villain at the time. Justin apologized to Brit just last year — which was lumped alongside his apology to Janet Jackson — saying he does “not want to ever benefit from others being pulled down again.”

As for Britney’s chat with Jesus, it ended with a dig at the hitmaker’s sister, Jamie Lynn Spears. The caption concluded:

“[Jesus said,] Then your blood, one of the hardest times in your life guess what you sister does… a book too… all for what???? Knowing doing a book is the last thing you would ever do … well because you ran away from drama and created a dream world for yourself… that’s why artists create characters to escape!!!! So since I know you don’t want to tell your story as Jesus your Lord and Savior… I’m gonna give you 5 bottles of jack and a life supply of McDonald’s french fries… now go play dear child!!!!.”

Unresolved drama aside, we’re glad Britney’s been able to express herself the way she wants. To that, all we can say is… amen!

A Comprehensive Guide To Finding Inventory In Today’s Market