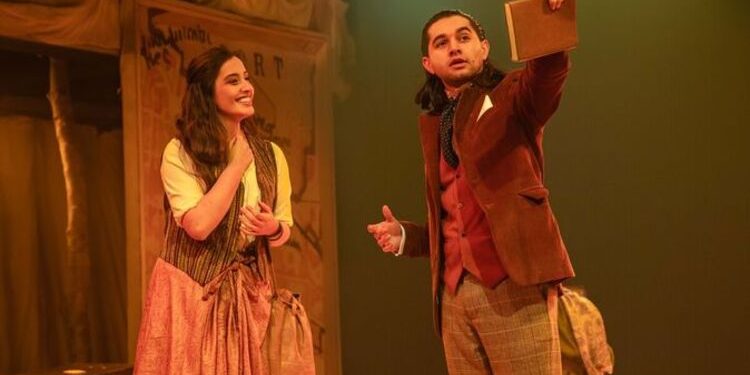 
From his New York apartment, the older Gibran (Naaman himself, who also directs) relates the story of his teenage self in Beirut and his love for Selma (Noah Sinigaglia).Their budding romance is thwarted when she becomes the victim of an arranged marriage organised by the conniving Bishop (Johan Munir) and her own wealthy father. “My father placed me in the market and I have been bought,” says Selma. The slow-burning tragedy is played out on a central stage with the audience on either side and a fine band perched above. Musically complex, the lyrics advance the story, sharing the narrative burden with the dialogue.

As the would-be lovers part, the story becomes more focussed on Selma’s unhappy marriage to the Bishop’s playboy son Mansour (Haroun Al Jeddal) who continues his philandering ways without remorse.

Director Bronagh Lagan maintains a decent pace. The excitability of the adolescent characters sometimes distracts from the songs but the singing is impeccable from Naaman as the older Gibran through to Singaglia whose professional debut as Selma is outstanding.

If some of the meandering compositions don’t quite have the Middle Eastern character anticipated, the galloping beat and anthemic chorus of Spirit of the Earth is superbly delivered by Soophia Foroughi as Mother. An evening of intoxicating melancholy.

What is Swift and what would shutting Russia out of it achieve? | E-commerce