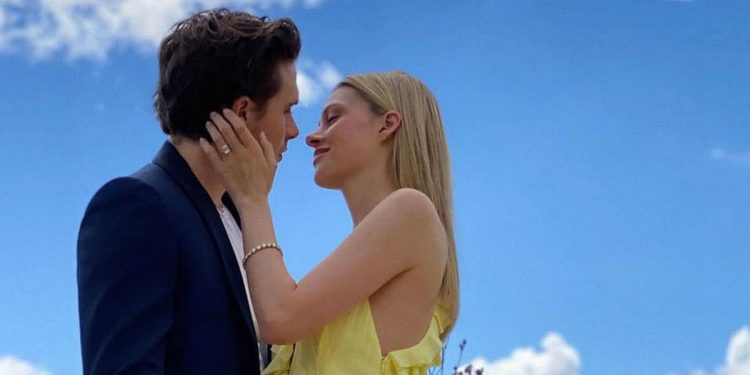 
The newlyweds will soon be Vogue cover stars as it’s said the fashion bible snapped up the rights to their wedding photos – two decades after Victoria and David Beckham flogged their wedding snaps to OK!

Newlywed couple Brooklyn Beckham and Nicola Peltz have landed the mother of all magazine deals in relation to their wedding as Vogue have snapped up the rights to share photos from their big day.

The 23-year-old son of Victoria and David Beckham married 27-year-old billionaire heiress and actress Nicola on Saturday at a lavish ceremony in Miami, Florida, in front of 300 guests.

A-List stars including Spice Girls Mel B and Mel C, American actress Eva Longoria and tennis champion Serena Williams were among those watching the young lovers swapping vows at the ceremony.

And while photographers have managed to capture some moments of the wedding – including the arrival of guests and the moment Brooklyn and Nicola kissed for six full seconds after saying ‘I do’ – it will be Vogue that publishes the full collection of wedding snaps.

The Mail on Sunday reports: “The couple will appear on the cover of the fashion bible.

“There will be further photographs of Brooklyn and Nicola, 27, and their A-list guests across several pages inside the publication, thought to be the June edition.

“There is also speculation the wedding will appear in both the US and UK versions, which are edited by David and Victoria’s friends Anna Wintour and Edward Enninful.”

The report goes on to suggest that Brooklyn and Nicola will give fans a sneak peek at their wedding on Sunday, however, as they are planning to share a “small selection of photos along with some video footage”.

The star couple are following the age-old tradition of seeing their wedding day snaps appearing in print – with Brooklyn’s very own parents having their own wedding photos appear in OK! Magazine back in 1999.

David and Victoria Beckham’s wedding snaps featured on the cover of OK! back in 1999
(

While the ceremony itself honoured the bride’s Jewish heritage, with Brooklyn and Nicola swapping vows while under a flower-garlanded chuppah.

Brooklyn’s youngest sibling, 10-year-old sister Harper Seven, was a bridesmaid and was spotted at the event in a white dress and with a crown of white flowers on her head.

While the star’s 17-year-old brother Cruz was the best man on the big day.

News of Brooklyn and Nicola being handed a Vogue magazine cover might ruffle feathers in the fashion and photography worlds – as failed photographer-turned occasional chef Brooklyn has been slammed for being handed glittering opportunities in the past.

Back in 2020, the star caused upset when he was given the chance to take photographs for the fashion bible – with many feeling he was unqualified for the honour.

While earlier, in 2016, he sparked outrage in the fashion world when Burberry selected him to photograph a campaign for their Burberry BRIT fragrance line.

Victoria and David Beckham looked elegant and stylish at the wedding of their son, Brooklyn
(

Harper Beckham was a bridesmaid at Brooklyn’s wedding
(

While fellow noted fashion photographer Jon Gorrigan slammed the hiring of Brooklyn as an “injustice”.