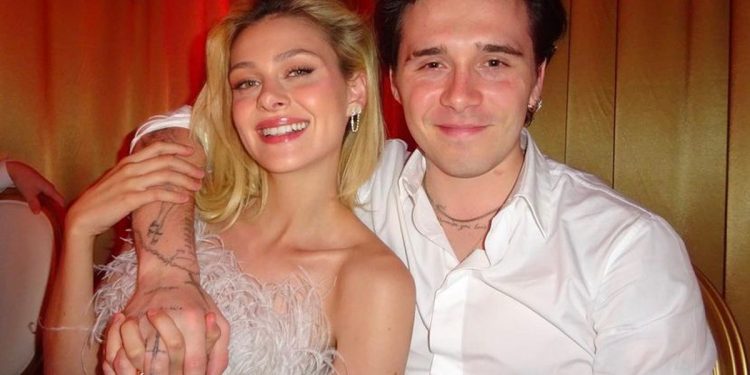 
Nothing but the best for this “modern fairytale” of a wedding!

Brooklyn Beckham and Nicola Peltz officially tied the knot over the weekend in a lavish, multi-day, star-studded celebration. The event took place at the Palm Beach estate of the actress’s father, billionaire Nelson Peltz. According to The Sun, the entire event cost around 3 million pounds — nearly $4 MILLION. The tabloid reported that the affair was paid for by the Peltzes “at Nelson’s insistence.”

Related: Jennifer Lopez & Ben Affleck ‘Are Not Talking’ About Wedding Planning Just Yet!

Vogue was on the scenes and got the inside scoop on the soireé. As we previously reported, Nicola wore a custom Valentino gown, which had an evil eye and a special message sewn inside by her mother for her “something blue”. Meanwhile, Brooklyn wore a diamond chain on his lapel by Anita Ko gifted from his in-laws. His new wife also sewed a bespoke label into his Dior suit (“Brooklyn loves labels,” she told the outlet).

Per Vogue, guests were served food from Thierry Isambert, former chef for President Bill Clinton. The couple had their first dance to Only Fools Rush In, performed by South African artist Lloyiso. Brooklyn’s Best Men, his brothers Romeo and Cruz, gave speeches, as well as their dad David Beckham. The footballer’s speech was reportedly an emotional one, with a source telling The Sun:

“David’s speech went on for about five minutes and he looked to shed a tear at one point. He was talking about when Brooklyn was born and how he wanted to protect him. He said he was sleeping on the hospital floor, holding the door shut because he didn’t want to let anyone get in. David got a lump in his throat and had to stop and take a breather to regain his composure, but it was a very sweet speech.”

Insiders said he called his new daughter-in-law “incredible,” noting that during a pre-party speech on Friday he had told her:

“We love you so much. We are excited that you’ll be part of the family.”

Sources informed The Sun that the couple had “six white tiered cakes, all in different sizes.” As guests left, they were given bags of food from Wendy’s, the chain owned by Nelson Peltz, according to the tabloid. (Kind of funny to imagine all those rich people eating fast food after such a fancy affair, but we wouldn’t turn down some french fries after a night of drinking and dancing!)

The festivities concluded the next day with brunch at the businessman’s nearby mansion. The newlyweds rolled up to the gathering in a custom blue Jaguar convertible, gifted to them by David and Victoria Beckham. (David is an investor in restoration company Lunaz, which reengineered and electrified the vehicle, per DailyMail.com.)

Both the bride and groom shared some of the Vogue shots from the wedding on Instagram (where the 23-year-old has already updated his name to “Brooklyn Peltz Beckham”). The Bates Motel alum thanked her father for the celebration, writing:

“Thank you for the most beautiful weekend of my life. You’re the wind beneath my wings

With a price tag like that, we certainly have to give it up for dad! Looks like it was indeed a pretty incredible weekend, though. Wishing the newlyweds all the best as they begin this new chapter together.