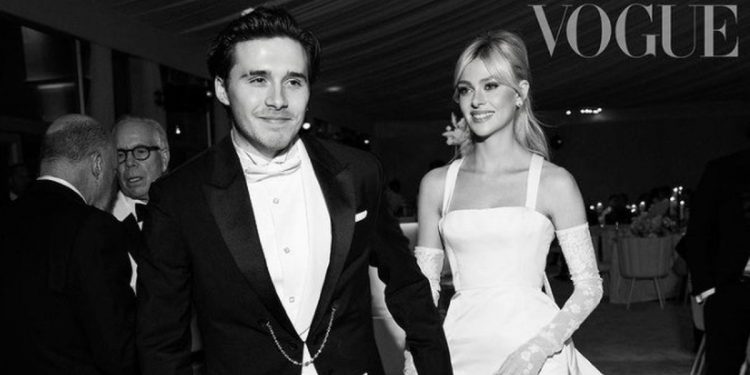 Brooklyn Beckham and Nicola Peltz get married in Miami

Brooklyn Beckham has shared the first image of married life to Nicola Peltz with a beautiful black and white wedding shot.

The model, 23, tied the knot to the American actress, 27, at a star-studded wedding extravaganza – and it appears the pair will share a double-barrelled surname.

The pair said “I do” in a spectacular wedding ceremony at the Peltz family’s oceanfront home in Palm Beach and now Brooklyn has shared a first look at the snaps provided by Vogue magazine.

He captioned the post: “Mr. & Mrs. Peltz Beckham,” and was met with an influx of congratulatory messages by his friends and followers.

Brooklyn’s younger brother Cruz reshared the snap on his own Instagram Stories alongside heart emojis.

Brooklyn followed up the post by revealing another stunning snap.

He showed off his new bride’s custom made dress in all its glory, captioning the image: “My beautiful bride.”

The American billionaire heiress actress wore an elegant dress designed by Valentino for her big day.

The amazing gown featured long sleeves and a dramatic lace veil that trailed behind the Transformers actress as she took to the aisle.

In Brooklyn’s post, the blonde beauty can be seen posing beside a huge vase of flowers in the hallway of the stunning setting.

The renowned fashion design house – of which Nicola visited in Italy twice to ensure her dress was perfect – sells exclusive wedding gowns that retail in the tens of thousands of pounds.

And it’s safe to say Nicola certainly looked a million dollars on her big day.

While the pair are clearly head over heels in love with each other, they are said to have took on board the advice of those closest to them and signed a pre-nup.

The Beckham family is said to be worth around £343million, while Nicola’s parents – American property mogul and investor Nelson Peltz, 69, and former model Claudia Heffner Peltz, 67 – have a huge £1.2billion fortune.

However, all that was pushed to one side as they took in their special day on Saturday.

Nicola had admitted she was “terrified” to hit the dance floor on the big day, saying: “I can’t dance.”

But it appeared as though the nerves vanished as soon as the couple took centre stage to dance to their first song – Elvis Presley’s Can’t Help Falling In Love.

Nicola and Brooklyn first went public with their budding relationship in November 2019 when pictures emerged of them hugging after attending a Halloween party together.

The pair took the next step to move in with each other at the Beckham’s family home as the pandemic hit in March 2020.

And just eight months later they announced their engagement, with Brooklyn proposing with a $325,000 emerald and diamond ring.

Although Brooklyn is wealthy from his parents respective fortunes, that is eclipsed by Nicola’s father’s estimated worth as a billionaire and one of the richest men in America.

Behind the scenes at Brooklyn Beckham’s wedding – Tension, kisses and who was having fun