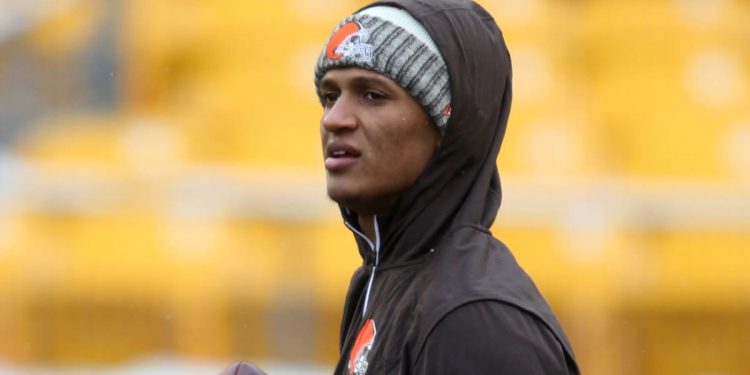 Editor’s note: This story contains accounts of sexual assault. If you or someone you know is a survivor of sexual assault, contact the National Sexual Assault Hotline at 1-800-656-4673 or at https://www.rainn.org.

Tom Brady is known as being the greatest of all time, mostly because he’s won seven Super Bowls, more than any player or any NFL team in history.

Kizer agreed that Brady’s rings make him the easy answer for who the “GOAT” is, but then he said if newly signed Browns quarterback Deshaun Watson wins a Super Bowl with Cleveland, that he could make a case for being the “GOAT.”

The Browns have never even appeared in a Super Bowl, let alone win a ring during the Super Bowl era. It would be a tough task to turn a team that didn’t make the playoffs last year after placing last in the AFC North standings into Super Bowl champions.

Fans immediately began arguing in Kizer’s thread, saying that Watson would need to win more than one Super Bowl to even be considered the “GOAT.”

Kizer later updated his Twitter thread by admitting it would have to take Watson earning a few Super Bowl rings before he can even enter the conversation.

Watson himself hasn’t appeared in a Super Bowl with his previous team, the Texans. He played in Houston from 2017 to ’20, before sitting out last season. Watson demanded trade from the Texans in the offseason, and then became the subject of significant legal uncertainty amid numerous allegations of sexual misconduct and assault during massage therapy sessions. He still has 22 active civil lawsuits against him, which describe accounts that range from Watson refusing to cover his genitals to “touching [a plaintiff] with his penis and trying to force her to perform oral sex on him.”

The quarterback faced 10 total criminal complaints but will not face charges after a pair of grand jury hearings in March. Nine “no” bills were returned in Harris County, and a grand jury in Brazoria County declined to charge him on a 10th count.

The quarterback could serve a suspension during the 2022 season, depending on the outcome of the NFL’s investigation into his conduct. Some fans did not think Watson deserved to be included in the “GOAT” conversation because of his reputation.