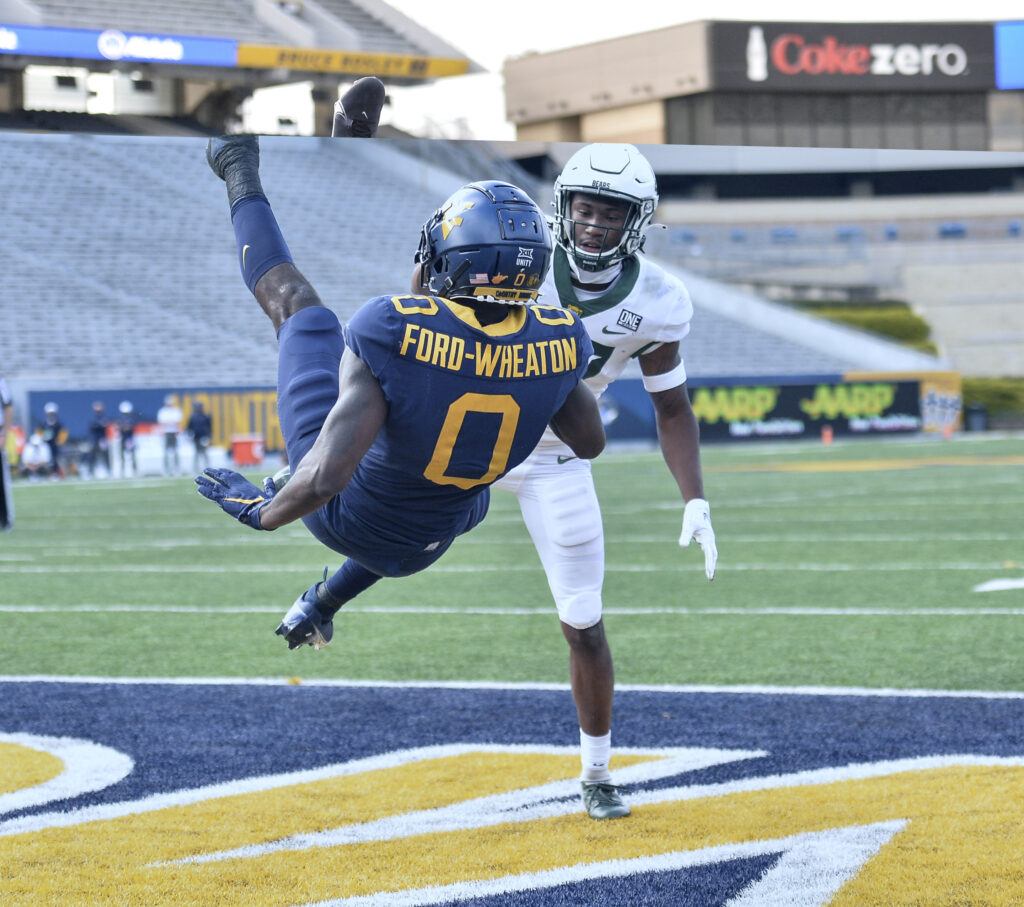 MORGANTOWN — WVU head coach Neal Brown heaped as much praise as a coach can about a player’s potential when talking about Bryce Ford-Wheaton.

The junior wide receiver has shown he can be a legitimate threat on the outside, hauling in 27 catches for 416 yards and three touchdowns in a shortened 2020 season, but Brown believes it’s only the beginning for Ford-Wheaton.

“I think he’s ready to take that next step. I think he can be one of the better receivers in our league, I really do believe that,” Brown said.

At 6-foot-3 and 222 pounds, Ford-Wheaton has all the physical tools, and his appearances on several academic honor rolls proves he has the brains to go along with it.

“He’s uber-talented,” Brown said. “He’s intelligent. He knows our offense in and out, and I think it’s time. I think he’d tell you the same.”

The one area Brown believes Ford-Wheaton needs to improve on to make the leap the coaches think he can is confidence. Ford-Wheaton has had an up and down career where he looks like the next big threat at receiver for the Mountaineers, and others where he seems to disappear.

Consistency is what he hopes to work on this spring, admittedly.

“I want to get better mentally, more than anything,” Ford-Wheaton said Wednesday. “I think I need to take a big leap mentally so I can help influence my teammates, especially the receiving room.

“The biggest thing is consistency — doing it every game instead of just one game or two games. I want to be a factor every game. I think that’s really what I need to improve on.”

Ford-Wheaton opened last season with a big game against Eastern Kentucky — 4 catches for 67 yards and a touchdown — but followed that up with two games where he combined for 4 catches and 41 yards, though he caught an overtime touchdown against Baylor.

Ford-Wheaton averaged 4.6 catches and 83 yards the next three games, but followed those up with a 1-catch, 9-yard performance in the regular-season finale vs. TCU.

Finally, he had 4 catches for 51 yards in the Liberty Bowl win against Army.

Putting all the pieces together is something Ford-Wheaton believes he can do in 2021, but doesn’t listen to outsiders believing the same.

“I don’t really pay too much attention to that,” he said. “I know I have to go out there and prove it before anything. My mindset going into this season is that I’ve already got my feet wet, I’ve already started multiple games, so there shouldn’t be anymore pregame jitters. I know exactly what I’m getting into now.”

I’m in with the IT crowd

Erling Haaland’s agent Mino Raiola reveals Dortmund will REFUSE to sell Man Utd transfer target.. and he is ‘OK with it’

I’m in with the IT crowd

Energy bills: Households set for costs to rise by hundreds of pounds

The Father film: where to watch, trailer, release date, cast with Anthony Hopkins – and is it on Netflix UK?