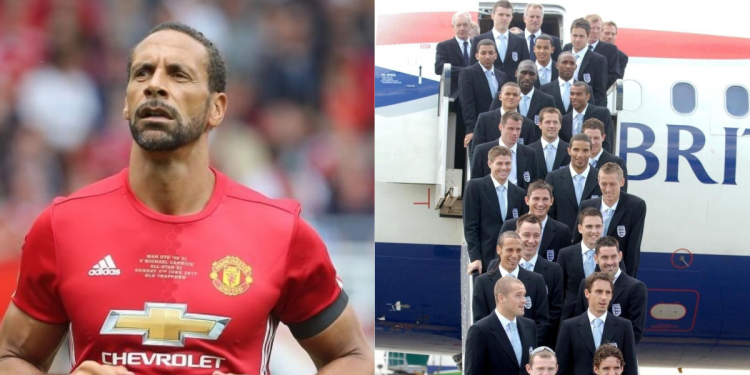 
FORMER England captain Rio Ferdinand has revealed he once feared the Three Lions team would be wiped out during a terrifying World Cup flight.

The ex-Man U, 43, defender has told how players including Wayne Rooney and Steven Gerrard were crying and praying for their lives as their plane hit severe turbulence.

The drama followed our elimination from the 2006 World Cup in Germany and has never before been revealed.

Opening up for the first time, Rio said: “We’d just been knocked out of the competition by Portugal in the quarter finals and we had the worst flight back you can imagine. We got caught up in some terrible weather and everybody thought we were going to crash. We were all crying.

“I was sat near Wayne Rooney and Steven Gerrard and their wives and everyone was screaming. It was turbulence on another level. It was mental and people and luggage were all over the place and no one knew what was going on.

“I definitely thought, ‘This is it,’ especially when I looked at the air stewardesses. You can always gauge how serious things are by their expressions and I looked at them and they were all sat down in their seats stony faced and clearly thinking, ‘F***, we’re in trouble.’

“I’m usually quite calm but then I looked at them and I was properly scared.”

If the private jet had crashed it would have wiped out what has been branded a golden generation of footballers that included Rooney, Gerrard, Frank Lampard,  John Terry, and David Beckham.

Famous Wags including Coleen Rooney, and Liverpool star Gerrard’s then girlfriend Alex Curran that had set tongues wagging with their glamorous antics at the Baden-Baden base would also have met a shocking end.

English hopes were high ahead of the 2006 World Cup but the team was eliminated after losing the penalty shoot out with Portugal after the game was tied 0-0 at full time.

Rio, who won 81 caps for his country, believes former Chelsea midfielder Lampard’s toilet habits were another reason the Three Lions were not more successful – as they ruined his sleep.

The widower and father-of-three said: “When I got called up for England I used to share with Frank Lampard.

“He didn’t snore or anything and he was mostly good but the only thing that was a bit of a bummer was that at midnight he would go to the toilet and it was quite loud.

“In fact it was really loud. So loud that it used to wake me up. This long, loud p*ss.”

More Than Just A GameFI Ecosystem By CoinQuora

More Than Just A GameFI Ecosystem By CoinQuora