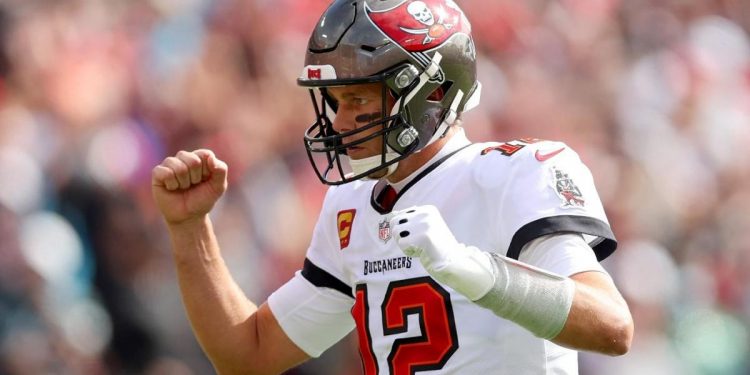 
The Tampa Bay Buccaneers and Los Angeles Rams are set to duke it out on Sunday afternoon with the winner punching their ticket to the NFC Championship. Both of these teams are coming off blowout wins during Super Wild Card Weekend. The Rams knocked off the Cardinals on Monday night, while the Bucs eliminated Philadelphia. As things stand currently, the Bucs are the field goal favorite at home as they look to keep their dreams of winning back-to-back Super Bowls alive. Meanwhile, Matthew Stafford is looking to play spoiler after getting his first career playoff win last week with Los Angeles.

In this space, we’ll specifically be looking at the different betting angles that this matchup has on deck for us. Below, you’ll read picks from both CBS Sports and SportsLine experts on this game, as well as a handful of player props that catch our eye.

All NFL odds are via Caesars Sportsbook.

“Both of these teams coasted in Super Wild Card Weekend, but the Rams’ win over the Arizona Cardinals was certainly surprising. Sean McVay’s squad recorded a 23-point victory, and the defense made Kyler Murray look like a rookie again. The Bucs could return Leonard Fournette or Ronald Jones or both this week, but I also believe this could be the week where Brady feels the losses of Chris Godwin and Antonio Brown more.

“Mike Evans had no problem last week against the Philadelphia Eagles, catching nine passes for 117 yards and a touchdown. The other wide receivers didn’t do much, however. Tyler Johnson caught two of three targets for 30 yards and Breshad Perriman caught just one pass for 5 yards on three targets. We saw both have a couple miscommunications with Brady as well. If L.A. contains Evans and Rob Gronkowski, that could lead to a loss for the Bucs. Additionally, the Buccaneers are dealing with several notable injuries which we all should keep an eye on as we inch closer to kickoff.

“Stafford has won two of his last three starts against Brady. He’s going to have to play turnover-free football, but I have the Rams upsetting the Bucs this week.” — CBS Sports NFL writer Jordan Dajani on why he’s taking the Rams +3 and predicting an upset for Los Angeles against the Bucs.

SportsLine expert R.J. White has been on an unbelievable run betting games involving the Buccaneers. White has gone 33-18-4 on his last 55 picks involving Tampa Bay, returning nearly $1,300. Naturally, you’ll want to see where he’s leaning in this game, especially since he’s found a key X-factor in this playoff showdown with the Rams. We can tell you he’s leaning under the total, but to see which way he’s leaning on the spread you’ll have to head to SportsLine.

“Both of these teams turned in strong performances in the wild card round, each winning by multiple scores. While the Rams defeated the Bucs in their regular-season matchup, I do think the calculus changes with this game being played at Raymond James Stadium. At home, the Buccaneers averaged an NFL-best 409.8 yards per game and an average margin of victory of 16.1 points, which also topped the league. The Rams were also a statistically strong team on the road this year but were under .500 away from SoFi Stadium against the spread. Against teams with a winning record, L.A. was also 2-5 ATS over their last seven games.

“I see Tom Brady being able to negate the Rams pass rush with quick throws from the pocket and pick his way down the field to build up enough of a winning margin that goes above this field goal spread.” — CBS Sports NFL writer Tyler Sullivan, who went 5-1 ATS over Super Wild Card Weekend, on why he’s taking the Buccaneers.

“This is a rematch from a game early in the season won by the Rams. But this is a Rams team playing on a short week after playing Monday night, and now it is forced to go across the country. That’s a challenge. The Bucs have some offensive line issues that could ultimately decide this game. Three of their linemen could miss this week’s game, which would not be a good thing against the Rams front and Aaron Donald. Matt Stafford played well against the Cardinals and the Tampa Bay defense has some issues on the back end, although it is healthier now back there. The Rams will want to run the ball to key their passing game, so it’s imperative on the inside three to block Vita Vea and that front. I think they can. This Rams team is loaded with stars, and I think this is when they will show up. Upset special. Rams win it.” — CBS Sports Senior NFL analyst Pete Prisco on why he’s taking the Rams and the points on Sunday. To see the rest of his picks, click here.

“Tristan Wirfs being injured and his backup being shaken up really gives me concern. At some point, the injuries are going to catch up to the Buccaneers. Plus I had the Rams in the Super Bowl this year.” — CBS Sports NFL Insider Jonathan Jones on why he is picking the Rams in this matchup. To read the rest of his picks along with his latest insider notes, click here.

“I want to take the Rams here, but I can’t bring myself to do it. Still, it’s hard to shake the image of Tom Brady being under pressure so often in the win over Philadelphia after Tampa suffered a couple of injuries on its offensive line. If Tristan Wirfs and Ali Marpet are less than 100% in this game, how will they fare against Aaron Donald, Von Miller and company? That said, it’s still Tom Brady, and I’m not all that interested in betting against Tom Brady.

“Instead, I’ll bet the total. Those concerns I have about the Tampa offense are real, and I’m not as convinced the Rams’ offense will look as strong outside on grass as it did at home indoors. Furthermore, Shawn Hochuli will serve as the ref for this game, and his games tend to be lower-scoring. I assume it’s because everybody falls asleep while he’s spending 15 minutes explaining every penalty to you. Like father like son!” — CBS Sports’ Tom Fornelli on why he’s taking the Under in Rams-Buccaneers. To read the rest of his best bets, click here.

CBS Sports Senior Fantasy writer Dave Richard has a slew of prop picks for the divisional round. Below, you’ll be able to find his two go-to props for Rams-Buccaneers. To read the rest of his picks for the upcoming slate, you can click here.

Best Bet: Tyler Higbee over 43.5 receiving yards -115 Higbee’s had at least 46 yards in four of his past five thanks to at least five targets per game in seven of his last eight. In short, he’s becoming much more involved in the Rams offense, complete with a 22% minimum targets share in each of his past three games. The Buccaneers pass defense is solid but four of the last five tight ends with at least five targets have knocked them over for at least 45 yards. The one who didn’t? Panthers rookie Tommy Tremble. I expect Higbee to continue in his role with the Rams, and I expect the Rams to throw much more than they did last week.

Big odds: Rams -8.5 +400; Higbee over 43.5 receiving yards and Rob Gronkowski under 63.5 receiving yards same-game parlay +270 When the Rams win, they win big — nine of their 13 wins are by nine-plus points, including their Week 3 win against the Bucs, who at that time had Chris Godwin and a healthy offensive line. The Rams have also been solid at taking away opposing tight ends (including Gronkowski, T.J. Hockenson, George Kittle twice and Zach Ertz twice), so parlaying that prop with the Higbee prop feels like a win.