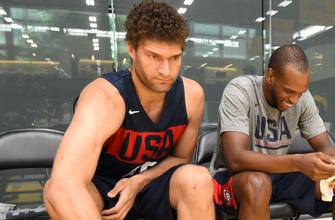 MELBOURNE, Australia — USA Basketball finalized its roster for the FIBA World Cup on Saturday and two Milwaukee Bucks players are on the team — Khris Middleton and Brook Lopez.

Kyle Kuzma of the Los Angeles Lakers has a left ankle injury that will keep him from playing in the tournament, which starts Aug. 31 in China. The Americans had 13 players and needed to get down to 12 for the World Cup.

The U.S. faces the Czech Republic to open the World Cup on Sept. 1 in Shanghai. Japan and Turkey are also in Group E. The U.S. needs to finish in the top seven to qualify for next year’s Olympic Games.

Three other Bucks players will be playing in the FIBA World Cup as well. Giannis and Thanasis Antetokounmpo are on the Greece squad while Ersan Ilyasova is playing for Turkey.

The Associated Press contributed to this report