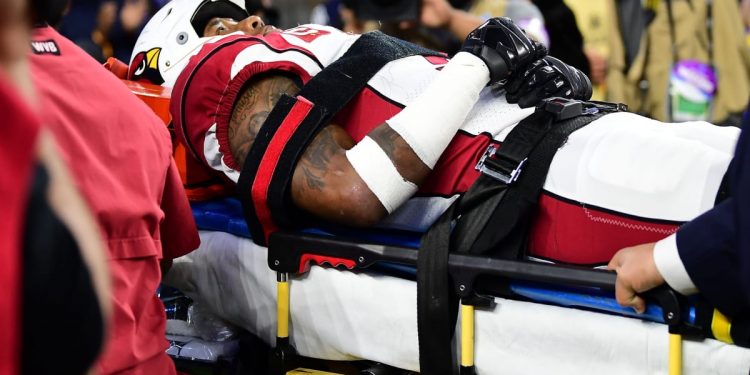 Cardinals safety Budda Baker said he expects to make a full recovery after suffering a concussion against the Rams on Monday night in the NFC wild-card game.

“Thank you for all the well wishes and the prayers from everyone,” Baker said in a video on Instagram. “I appreciate you guys. Everything came out clean. I’m going to make a full recovery, so definitely blessed.

“I’m excited to get out of this hospital and get back to Arizona. I haven’t been able to shower, I stink still, and just ready to get back home and be with my family. Love you guys, appreciate all y’all always sending love.”

Cardinals senior vice president Mark Dalton shared a photo of Baker on a plane back to Arizona after being released by the hospital on Tuesday afternoon.

Baker, 26, was carted off the field during the third quarter of Monday’s eventual 34–11 loss to Los Angeles after tackling Rams running back Cam Akers. After taking the blow from Akers, it looked as if he was unconscious.

However, Baker was able to move his arms before he was placed on the cart and taken to the locker room. Arizona announced that Baker suffered a concussion and he did not return to the game. He finished the game with four tackles.

Moments after Akers delivered the blow to Baker, he made what appeared to be a  taunting gesture toward Baker. However, once Akers realized Baker was hurt, he went back on the field to check on him, and told his Rams teammates to take a knee according to The Athletic.

Akers also later tweeted on Monday, “Prays up to Budda. I didn’t know he was hurt after the play but I have nothing but respect for him.”

Baker has spent his entire NFL career with the Cardinals. Since Arizona drafted Baker in the second round of the 2017 NFL draft, he has earned four Pro Bowl selections and also notched a second-team All-Pro selection this season.

For more Arizona Cardinals coverage, go to All Cardinals.