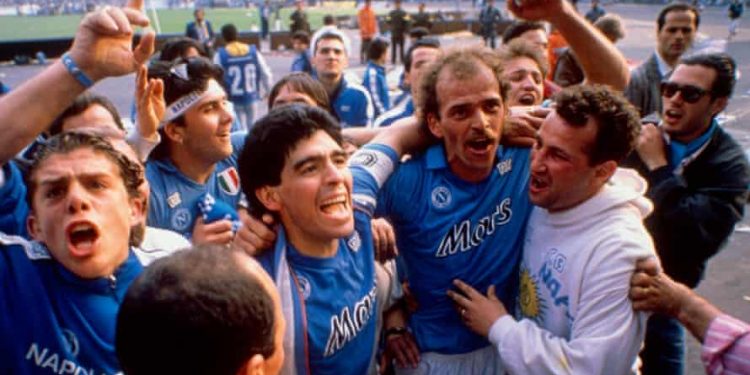 
Last Sunday, amid jubilant scenes at the Pier Luigi Penzo Stadium, Napoli scored a 100th-minute goal to seal a 2-0 win over Venezia, cutting Internazionale’s lead in Serie A to a single point. The following morning, tickets for their next game – a potential title showdown at home to Inter – went on general sale.

Almost immediately, Napoli’s ticket website began to gasp under the sheer volume of traffic. Disgruntled fans complained to the club after spending hours refreshing and rebooting the page, sitting in virtual queues of about 15,000. The stadium box office was a similar story, as restive queues stretched out of the club shop – although, this being Naples, the word “queue” demands a certain imaginative latitude on the reader’s part – and on to the street. The head of Napoli’s official ticket platform fiercely rejected suggestions of a technical problem, instead blaming fans for attempting to purchase tickets despite not possessing the required documentation.

Anger out of elation; expectation stalked by disappointment and resentment; an orderly process slowly and inexorably crumbling into chaos: as it turned out, this felt like a pretty fitting buildup to Napoli’s biggest game of the season, a fixture that could make or break their campaign to win a first league championship in 32 years. This is, after all, a club with their own particular set of neuroses, foremost of which is a belief that nothing good ever came without a few complications.

“Vietato parlare di scudetto,” the club’s owner, Aurelio De Laurentiis, said last weekend. “It is forbidden to talk about the championship.” And when you have been burned as many times as Napoli, perhaps a certain superstition is inevitable. Four times in the past nine seasons they have finished runners-up to Juventus. In 2018, Maurizio Sarri’s team finished with 91 points, a total high enough to have won 24 of the past 27 Serie A titles. It was one of the greatest seasons in the club’s history. It didn’t matter, because Juventus got 95.

But Juve are not in the picture this time, even if they are close enough in fourth to be an outside threat. Instead the pace is being set by Inter, Napoli and Milan, all within a point of one other at the top. Beat Inter on Saturday evening and Napoli would go two points clear, having played a game more but with all the momentum on their side. The dream is real. But invoking it – actually confronting the possibility that they could achieve what no Napoli side have managed without Diego Maradona – feels almost as significant an obstacle as the title itself.

For now Napoli are underdogs, which suits them fine. “Inter is still the team with the greatest potential,” their manager, Luciano Spalletti, insists, and when it comes to experience and finance and trophy-winning pedigree, it’s hard to argue. For all the strides Napoli have made off the pitch, they have only the fifth-highest wage bill in Serie A, after Juventus, the two Milan clubs and Roma. This season, like most seasons, a Champions League place was probably the limit of their ambitions.

Then came a spectacular autumn in which Napoli won their first eight games and as of mid-November were the last unbeaten club in Europe’s big five leagues. But as happened 12 months earlier, Napoli’s form dipped just as the fixtures began to pile up. By the time they lost 1-0 at home to Spezia just before Christmas – their third defeat in four – they were seven points behind Inter. With a litany of injuries and the Africa Cup of Nations claiming the midfielder André-Frank Zambo Anguissa (who you may know from his Fulham days) and centre-half Kalidou Koulibaly (who you may know from every transfer gossip column since 2015), Napoli appeared destined for another season of nearly but not quite.

But quietly over the past few years, first under Gennaro Gattuso, then Spalletti, Napoli have been building something: a squad high on technical ability and defensive solidity, based around a stable core. The skeleton of the side – Koulibaly and Mário Rui in defence, Dries Mertens, Lorenzo Insigne, Piotr Zielinski and Fabián Ruiz in the final third – has been in place for three or four years. A shrewd recruitment policy has often involved sourcing players overlooked by bigger clubs – Inter’s Matteo Politano, Arsenal’s David Ospina, Manchester United’s Axel Tuanzebe, who has joined on loan. But perhaps the biggest signing of all was also Napoli’s biggest gamble.

Victor Osimhen joined from Lille in the summer of 2020 for about €70m. A talented but largely untested striker who cost about double Napoli’s previous transfer record – in the middle of a pandemic – it was a decision that could have gone badly wrong. In his injury-plagued first six months at Napoli, he scored two goals, earned one red card and contracted Covid after returning to Nigeria for a birthday party. One pundit described him as the biggest failure in Serie A.

But when Osimhen finally came good, he changed everything. Quick over the ground, sharp in the penalty area and dominant in the air, with a high defensive work rate and a deadly shot, Osimhen was in many ways the missing piece of the puzzle: the deadly centre-forward Napoli had been missing since the sale of Gonzalo Higuaín in 2016. Spalletti’s team are more patient and possession-based, a machine “built to win every game” as he puts it, and Osimhen’s ability to fashion goals out of almost nothing has been a large part of their success.

In this and other respects, this Napoli side feel strikingly different to their predecessors. Naples, the city and the club, has long enjoyed a reputation for glorious chaos, chaotic glory, dysfunction pursued by triumph pursued by disaster, a cycle of romance and inevitable failure. Nobody embodied this better than Maradona, who in seven unruly years restored pride to the city, won the only two league titles in Napoli’s history, and left in disgrace and ruin.

By contrast, this is a Napoli side built on control and composure, with a professional outlook and the best defensive record in the division (and not even Maradona’s sides could claim that). Maradona is dead, and what used to be the Stadio San Paolo now bears his name. The era and the energy he embodied have never felt more like ancient history, a relic to venerate while the present generation tries to build something new. They still yearn for glory as deeply as they ever did. But not, you feel, for the same reasons they did.

The stadium will be half-full owing to Covid restrictions. Even if Napoli win, Inter will have that game in hand and a more favourable fixture list. There are plenty of twists to come in Europe’s most exciting title race. But Napoli have the form and the home advantage. Technically and tactically, they’re good enough. Saturday may just tell us whether they genuinely believe it.

Jill Duggar Opens Up About Feud With Anna: Is She on Speaking Terms With Josh’s Wife?