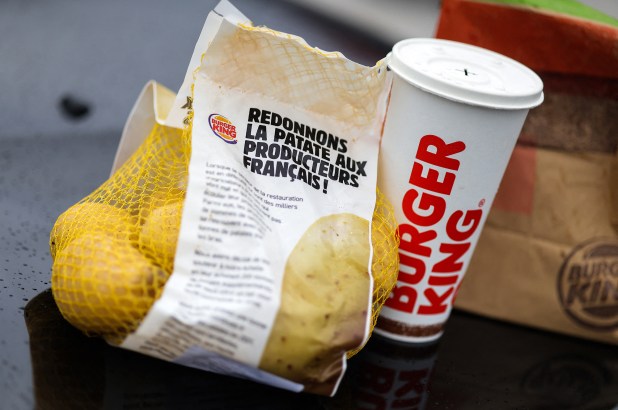 The fast food chain, Burger King, starts today Tuesday, February 02, 2021 a campaign to support farmers by offering a 1kg bag of potatoes to each customer of the drive of restaurants throughout France. Bordeaux, France on February 2, 2021.
Moritz Thibaud / Abaca / Sipa USA

It’s a king’s job to save the potatoes.

During the past several months, Burger King has taken steps to help out other companies in the food industry that may be suffering due to the pandemic. In the past, Burger King has officially suggested that customers order food from competitors and small, independent restaurants.

Now, Burger King in France is saving the potatoes.

Burger King France recently purchased an extra 200 tons of potatoes, B & T reports. The restaurant chain is giving away the extra potatoes one two-pound bag at a time for customers visiting the drive-thru.

According to the news outlet, each bag has a message printed on it that explains why Burger King is giving away the potatoes.

The message reportedly says, “With the restaurant sector in trouble, thousands of French farmers have found themselves unable to sell their produce. Among them, potato farmers have been left with tons of the crop on their hands.”

The message continues, “We’ve decided to lend a hand by buying 200 extra tons of potatoes and from February 2nd, we’ll be giving away a one kilo (two pound) bag of potatoes with every visit to a drive-thru.”

Burger King concludes the message by reminding customers to further help farmers by not forgetting to buy potato-products (many of which, it turns out, are sold by Burger King).

Last November, Fox News reported that Burger King had issued a surprising decree by encouraging fans to order from competitors like McDonald’s, in a show of support for the restaurant industry as England entered a second national lockdown to curb the coronavirus.

Inside Politics: Boris Johnson ‘beaten up by the scientists’, Tory MPs complain