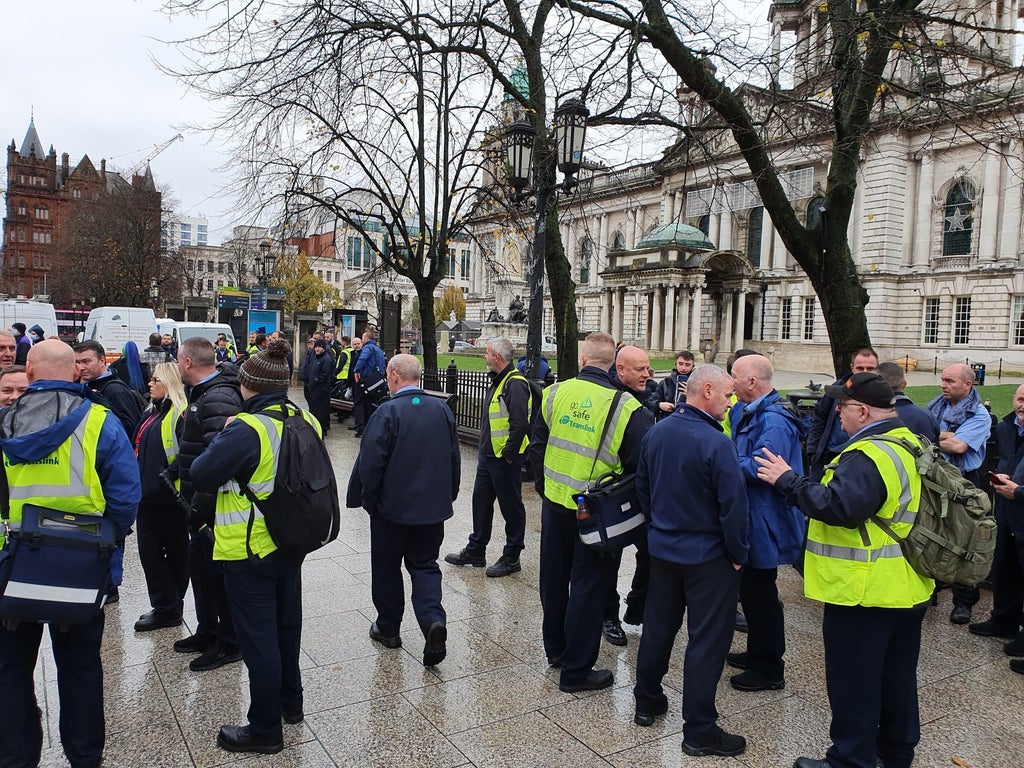 number of bus services in the Belfast area are to be suspended or diverted following recent attacks on vehicles, Translink has announced.

Some bus drivers earlier staged a walkout in solidarity with colleagues who have been targeted in hijackings amid rising tensions over opposition to the Northern Ireland Protocol.

Two buses have been hijacked and burnt in loyalist areas in the past week.

Translink management held a meeting with union representatives on Monday and announced the changes to its Metro routes.

Five routes will be suspended from 6.30pm on Monday, while another seven will operate with diversions.

The routes affected include some of Belfast’s busiest roads, including the Antrim and Shore Roads, the Newtownards Road and the Crumlin Road.

The routes will resume on Tuesday morning and daily decisions will be taken over future evening services.

Rail services are not affected.

Ian Campbell, Translink director of service operations, said: “The safety of our passengers and employees is paramount and our highest concern.

“Our staff want to provide essential public transport to keep society connected. But this attack on our people and services is simply unacceptable.

“We are very mindful of everyone’s safety and understand the level of concern expressed by our staff and their families.

“We will work closely with the PSNI the local community, our unions and all stakeholders as we monitor this difficult situation.

“Our plans will always put safety first as we work towards reinstating essential public transport for those who rely on us.”

Drivers had gathered in the grounds of Belfast City Hall on Monday, hours after four masked men, armed with a hammer and a bottle of petrol, boarded a bus near the loyalist Rathcoole estate in Newtownabbey.

The driver and passengers were ordered off, and the vehicle was set alight.

Last Monday, a bus was hijacked and burned in a loyalist area of Newtownards, Co Down, in an apparent protest against the Northern Ireland Protocol.

Sharon Graham, general secretary of the Unite union, said they had held discussions with management to increase support and security for drivers.

She said: “Last night’s attack is an attack on workers everywhere.

“The only outcome of this senseless act is that another bus driver has been left traumatised.”

Chairman of Unite Metro bus drivers’ branch, Michael Dornan, said he had spoken to the driver caught up in Sunday night’s incident.

He said: “He has been left traumatised as a result of what he experienced and we are trying to provide him all the support possible.

“Translink drivers are deeply angered that we are always the political punchbag for issues we have no power over or hand in.

“All we do is provide a valuable public service for our communities but we are the ones who are on the front line.

“All politicians need to act and end these attacks on drivers.”

Police have appealed for information over the attack in Newtownabbey.

PSNI Detective Inspector Lenaghan said: “It was reported at around 7.45pm that four masked men got on to the bus as it made a stop at Carnreagh Bend, and ordered its passengers to get off.

“The men, who were reported to have been carrying a hammer and a bottle of petrol, then forced the driver to make the journey to Church Road, and proceeded to smash windows and set the bus alight.

“The suspects were said to have been dressed in black, and believed to be aged in their 40s.

“One of the men was described as being around 5ft 7in in height, whilst two of the others were estimated as being 6ft or taller.”

The officer added: “This was a distressing and frightening ordeal for everyone involved, and we are thankful that no-one suffered any physical injuries.

“This reckless incident also continued to cause disruption for those who live and work in the area, and we would ask drivers to avoid it as we continue to carry out our investigations.”

The latest attack has drawn condemnation from political parties across Northern Ireland.

DUP leader Sir Jeffrey Donaldson said: “We want to be absolutely clear that this kind of violence is totally unacceptable, it serves no purpose whatsoever and we want to see those responsible for violence on our streets, whether it’s in Rathcoole, in Newtownards, or on Lanark Way, brought before the courts because in the end this is criminal behaviour.

“It does nothing to advance any cause whatsoever, never mind opposition to the protocol.

“And we are very clear that politics is the only way we’re going to resolve these issues.

“It will not be through violence or the threat of violence.”

SDLP leader Colum Eastwood suggested the attack is part of orchestrated violence in protest against the protocol.

“That tap has been turned on but it’s being controlled.

“It’s absolutely wrong,” he said of the recent violence.

“I, frankly, think that people like Lord Frost and senior members of the DUP need to think very carefully about the language that they’re using, because they’re creating more and more instability on the streets of Northern Ireland.”

Deputy first minister Michelle O’Neill told the Stormont Assembly: “I’m sure everybody in this chamber would want to send our thoughts to the bus drivers involved, and also those people that were also taken off the bus, because this is dangerous activity, it’s reckless activity, and it should be condemned rightly by everybody across society.”