Cattle musterer Nicole Lorimer moved her family to a run-down Northern Territory cattle property three-and-half years ago because they “didn’t want to have all of our eggs in one basket”.

The family had struggled after a snap ban on live cattle exports to Indonesia in 2011, which brought the Territory’s cattle industry to a standstill.

“Ninety per cent of our cattle went to live export,” she said.

With the purchase of the 242-hectare Ooraminna Station, nestled within the 242,340-hectare Deep Well Station, Ms Lorimer, her partner and three young children tapped into Australia’s burgeoning agritourism industry.

They see their farm stay as part of the next big travel trend that NT farmers hope will help them stay afloat amid chronic worker shortages caused by the COVID-19 pandemic and climate challenges.

Farmers groups have partnered with Airbnb to promote stays on the NT’s vast cattle stations where there are stunning escarpment vistas, billabongs, rivers and unique wildlife.

To get there, it is a short drive from Alice Springs and then a further 27 kilometres along a red dirt road that can become submerged in the wet season.

The station sits between the rugged MacDonnell Ranges that hold ancient cultural significance for the local Aboriginal people and the sandy plains of the Simpson Desert.

“The remoteness is outstanding to most people,” Ms Lorimer said.

“Our main business is in the cattle industry as musterers … [our farm stay] assists us to maintain functionality.”

‘Seek Different’: The two-word slogan aiming to claw back $1.3b in lost tourism revenue 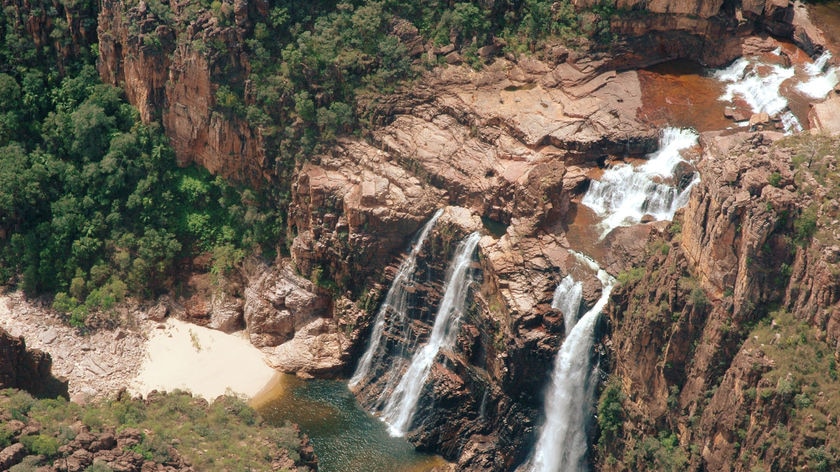 The NT government launches a $2.5 million tourism campaign in the hopes of clawing back an estimated $1.3 billion that has been lost due to the COVID-19 pandemic.

Paul Burke, chief executive of the NT Farmers Association, said property owners and managers regularly faced shocks and having a regular income from tourism “insulates them and assists in difficult times”.

“Given the current restrictions on travel overseas, we saw that people are looking for unique escapes that are not the Gold Coast or the Whitsundays,” Mr Burke said.

“And we soon realised there was a real opportunity to have our membership diversify to create another stream to their business that in drought could secure them longer term.”

Mr Burke said with little preparation and work properties can be transformed to accommodate visitors.

And he said he hopes travellers who stay on NT properties will become goodwill ambassadors for people who make their living off the land.

“They will get a different perspective of the sheer isolation and difficulties in producing some of the world’s greatest food in difficult circumstances,” he said.

Tourists have for years beaten a well-worn track to Mt Bundy Station, a 2,428-hectare working cattle station, just over 100 kilometres south of Darwin.

They stay in 100-year-old stockmen, cook and manager quarters set on the banks of the Adelaide River and get to glimpse the inner workings of a cattle station.

“We have run a cattle enterprise in the Top End for 14 years with around 900 head of cattle – trading to Indonesia, Vietnam and exporting to the local Batchelor Meatworks,” she said.

Ms Witham said her family would not have been able to stay afloat relying on just one income stream.

“We’d have to lease more country to have more cattle to be viable – the tourism side makes the cattle side of our business feasible,” she said.

“We’ve created a monster with the tourism side, it’s now bigger than Ben-Hur … we’ve been lucky to employ all of our kids in both businesses.”

But Ms Witham said visitors were often keen to take tours and be part of cattle mustering — as well as staying in cabins and camping grounds — but insurance and liability make it difficult to offer them.

On their 129-hectare property near Litchfield National Park, about 100 km south-west of Darwin, Aisla Connolly and her partner plan to grow and harvest tropical fruit while welcoming both local and interstate visitors.

“In the NT you only get about six months when you can make an income from agriculture due to the annual wet season, so we are hoping that opening our property up to tourism will cover the 12 months,” she said.

Big energy bill in the Covid crisis? Switch to save £250 or more | Money

Big energy bill in the Covid crisis? Switch to save £250 or more | Money