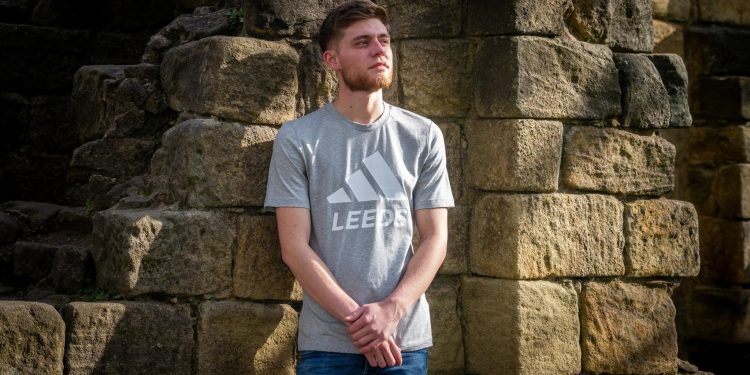 C.Wood, who grew up in Huddersfield but now lives in Morley, started writing when he was 14.

C.Wood is a conscious rapper-songwriter from Leeds (Photo: James Hardisty)

“I must have been about six or seven years old and it was the time of Akon, Eminem and that kind of US rap.

“When I first started writing it was some of what I do now, mental health-related, but for the first six years of writing I didn’t think too seriously about it.

“It was when I hit hard times in my life and things got more difficult that I started writing with more meaning.”

Connor, who is bipolar, was living in a “constant state of depression” before the pandemic, battling overwhelming negative thoughts and feeling trapped in his own mind.

While many found comfort in having extra time on their hands during lockdown, for Connor, it felt like a curse.

One evening, he found himself putting pen to paper and all his thoughts came spilling onto the page – and the melodies and hooks soon followed.

Nightmares on Wax interview: How the pandemic and a cancer scare inspired the Le…

“It was a way to completely release,” Connor said.

C.Wood hopes to connect with his listeners on a deeper level, helping them to know they’re not alone (Photo: James Hardisty)

“I’m not the best at talking about my struggles, so it was therapy for me.

“When I was writing, it would take me to another place and I’d escape from reality.

“It was a way to take myself away from certain situations and real life issues.

“Initially it was hard to be vulnerable, it held me back at first.

“But the more I’m doing it, the more I see it as a positive thing. It can be daunting beforehand but there’s a sense of relief when it comes to release day.

“Being lost in my own thoughts at home, locked inside for however many months, it was a push. I had more time to sit back and think about the songs I want to make.”

The track got a warm reception, with listeners reaching out to tell Connor how the lyrics had connected with them.

“That was my inspiration to keep going,” he said.

“I’ve had a few occasions where people have told me my lyrics helped to save their lives, helping them to know they’re not alone and not the only ones feeling that way.

“That’s the best feeling I could ever have. I’d rather have 10 listeners who can resonate with my music, rather than thousands who just listen but don’t take it in.

“I want to focus on the influence I can have on other people.”

His raw and honest lyrics, packaged up with melodic hooks, are making waves on Soundcloud – where he’s amassed more than 70,000 plays.

Connor takes inspiration from the Soundcloud rap generation, including US artists Juice World and Lil Peep.

Their music helped Connor know he wasn’t alone during some of his darkest times.

But he’s proud to represent Leeds and hopes that his music will now have the same effect on his listeners.

Connor added: “A few years ago, there wasn’t much attention on the Leeds music scene.

“We’re close to opening that door. We’re not quite there yet, but it’s definitely about to go somewhere.”

Connor plans to release his debut album at the end of the year.

He recently performed his first gig in Huddersfield to a crowd of around 100 people and his first big goal is to perform at Leeds Festival.

“I want to be recognised for the right reasons,” Connor added.

“My aim is to help as many people as possible with what I’m speaking about in my songs.”

Connor is still finding his feet as an artist

He’s investing his time, energy and creativity” into his craft – and it’s starting to pay off.

He’s been backed by BBC Radio Introducing and he has plans for more live shows over the summer.

Connor says his latest single No More, released last week, is his most slick release yet.

“People who are in the background who are trying to pull me down.

“It was a way of saying, ‘look, I can see what you’re doing, I can see your movements’. I can’t have it anymore, it’s time to cut off certain people and surround myself with positivity.

“I’d say it’s my biggest release yet, in terms of the production and the mixing.”

The charity was formed in early 2016 by Halifax rugby league player Luke Ambler after his brother-in-law took his own life, and it runs support groups in Leeds.

It aims to break the stigma surrounding men’s mental health, creating a safe and confidential space for men from all walks of life to open up about their problems.

Connor has lost friends to suicide and penned his single Lost while dealing with his grief.

He released the track last month and all proceeds are being donated to Andy’s Man Club, to help them continue their vital work.

Connor said: “I initially wasn’t going to release it, it was too touching and I didn’t have the courage to go into the studio and record it.

“But there’s always been a stigma on men, that they shouldn’t struggle and they should feel perfect at all times – toxic masculinity. I wanted to make a change to that.

“I got in touch with Andy’s Man Club and told them I was looking to bring the track out and that it had a lot of meaning to me, about people I’ve lost. They appreciated it a lot.

“It’s a message to everyone else that it’s okay not to be okay.”