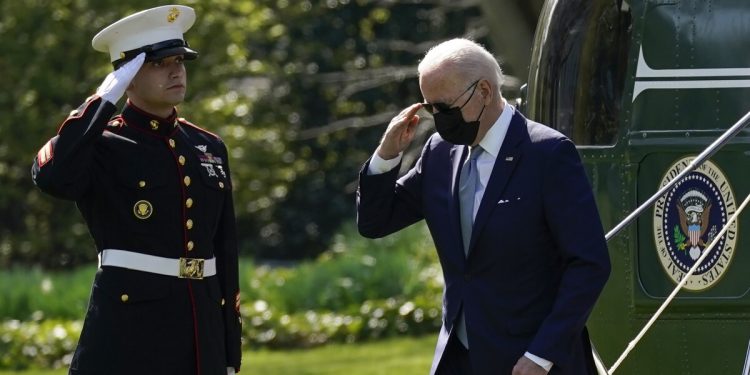 
Roughly 6 in 10 California voters give President Biden poor marks on his handling of inflation, according to a new UC Berkeley Institute of Governmental Studies poll, even as his overall job approval marginally improved in the last two months.

The survey, which was co-sponsored by the Los Angeles Times, found that voters in the state had mixed reviews of the president, with displeasure over his economic performance cutting against a more positive assessment of his record on the international stage. Still, with 50% of respondents signaling approval, Biden notched higher ratings than his vice president, Kamala Harris, or the two congressional leaders from California, Speaker Nancy Pelosi and House Republican Leader Kevin McCarthy.

The poll captures an electorate deeply pessimistic about the future. Two-thirds of registered voters believe the country is on the wrong track, while just 26% think it is heading in the right direction. Republicans are nearly unanimously bleak, with 92% having a negative outlook on the nation’s trajectory. A substantial majority — 65% — of voters not affiliated with a political party agree, as do 51% of Democrats.

“They’re not at all pleased,” said Mark DiCamillo, director of the Berkeley IGS poll, of Biden’s Democratic base. “Even though their ratings of Biden are positive, they don’t see the country moving in a positive direction. That’s kind of ominous.”

Despite the starkly negative assessment on the nation’s course, California voters are more evenly divided on their views of Biden. His 50% approval and 46% disapproval rating is slightly better than the 47%-48% marks he received in February, when the last IGS poll was conducted.

Nevertheless, enthusiasm for Biden in the state is sharply down from this time last year, when more than 6 in 10 voters gave him positive reviews. While Biden has lost ground with voters across the board, his steepest declines are among the state’s younger voters, ages 18-39, as well as Asian Americans and Latinos, two key Democratic constituencies increasingly courted by the GOP.

“During his honeymoon period and … during the election itself, he really was able to capture the support of the ethnic populations in California. It’s one of the reasons he won so big” in the state, DiCamillo said. “Now he’s falling back to Earth.”

One bright spot for Biden is his handling of the war between Ukraine and Russia, in which he finds himself on relatively solid ground with voters. Fifty-six percent of California voters approve of Biden’s management of relations with the North Atlantic Treaty Organization, a key partner for the United States in responding to Russia’s invasion of Ukraine, while 33% disapprove. His handling of American relations with Russia is also positive, albeit more narrowly, with 49% approving and 44% disapproving. Overall, a slim majority — 51% — approve of how Biden has dealt with the war in Ukraine, while 43% give him negative marks.

The positive reviews for his work abroad, however, are offset by California voters’ displeasure on economic matters back home.

“Inflation is on voters’ minds,” DiCamillo said. “They’re seeing it every day.”

The consumer price index, released by the Labor Department on Tuesday, showed inflation rose 8.5% over the last year — the highest year-over-year jump since 1981. The biggest drivers of the surge were the skyrocketing costs of energy and food, which have been exacerbated by the Russian invasion of Ukraine.

Views on inflation, as with most issues, vary drastically by party; just 5% of Republicans give Biden favorable marks, compared with 54% of Democrats and 27% of voters with no party preference.

But partisanship does not appear to be the sole factor driving some voters’ views. The state’s youngest voters, who generally tend to be more liberal, give Biden the lowest marks on inflation, while older Californians are more positive. Just 21% of voters ages 18-29 approve of Biden’s handling of the matter, compared with 49% approval from voters ages 65 and older.

Regionally, voters in California’s major urban areas, such as Los Angeles, San Francisco and San Diego, hold rosier views than those in more rural parts of the state, where assessments are more negative than positive. Notably, Biden’s popularity is evenly divided in Orange County, home to several battleground congressional districts that will have fiercely competitive races in the upcoming midterm elections.

Still, DiCamillo noted, Biden’s standing in Orange County, where his approval rating is 47% compared with 48% disapproval, is much stronger than in regions outside California with pivotal House races. Nationally, Biden’s popularity hovers around 42%, according to the website FiveThirtyEight’s average of polls.

“He’s probably not as serious a drag as he is in other parts of the country,” DiCamillo said.

Though Biden has seen minor improvements to his standing among California voters, Vice President Harris has not seen a similar uptick. Respondents continue to see her more negatively than positively, with 35% of voters approving her performance and 45% disapproving. Two months ago, her rating was 38% approval to 46% disapproval. The number of voters with no opinion of her performance has increased to 21% in April from 15% in February.

The increase of respondents on the fence indicates that “a number of voters are in a reevaluation mode,” DiCamillo said. “It’s not as if they’ve all gone to disapproval. They’ve gone to having no opinion. That’s not as bad but certainly not good for the vice president in her home state.”

Harris lags in popularity even among the voters who know her best; just 38% of residents of the Bay Area, where Harris is from and spent much of her public service career, give her favorable marks. By contrast, Pelosi, the longtime San Francisco representative who leads the Democrats in the House, has a 52% approval rating in the region.

Overall, both Pelosi and McCarthy, the Bakersfield Republican aiming to win his party the majority in the fall, are seen more negatively than positively by California voters. Perhaps unsurprisingly in a solidly blue state, Pelosi’s ratings — 42% approval and 48% disapproval — outpace those of McCarthy, who is seen favorably by 28% versus 49% unfavorably.

The survey shows McCarthy remains relatively unknown in the state compared with his Democratic counterpart; 23% have no opinion of his job performance in contrast to 10% for Pelosi. That may change if McCarthy becomes House speaker next year.

“It’ll be interesting to track how Californians view McCarthy as he gets elevated into a more powerful position,” DiCamillo said. “That’s going to be something to watch.”

The Berkeley IGS poll surveyed 8,676 California registered voters March 29-April 5. The poll was administered online in English and Spanish. The estimated sampling error is plus or minus 2 percentage points.