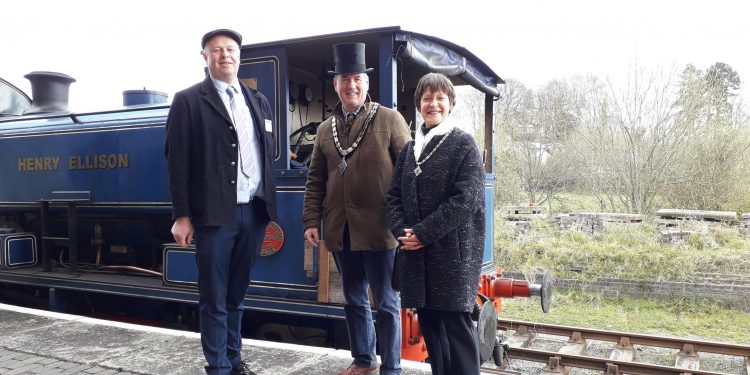 A DISUSED and derelict railway line has officially reopened as a heritage line, having been abandoned for more than 50 years.

Since 2016, volunteers from Cambrian Heritage Railways (CHR) have worked to extend the heritage railway from Oswestry and have reinstated two miles of new tract and a station platform at Weston Wharf.

North Shropshire MP Helen Morgan, Shropshire Council chairman Councillor Vince Hunt and Oswestry mayor, Cllr Mark Jones were among many guests invited for the reopening which took place in their Oswald Road base on Friday, April 1.

Rob Williams, chairman of CHR, paid tribute to those who helped make this project possible and hoped visitors would come and enjoy the railway.

He said: “It is a fantastic achievement by all concerned to reopen a passenger railway that hasn’t existed for over 50 years.

“We are grateful to Helen and Vince for officially opening the railway and I would like to pay tribute to all those individuals and organisations who have been instrumental in making this project possible.

“Our ambition going forward is to ensure as many people as possible have the opportunity to enjoy a special day out on our heritage railway.”

Andy Green, general manager of CHR. added it will be a ‘much better tourist’ attraction’ and said local businesses are looking forward to welcoming tourists who use the railway.

He said: “It is very good that we have managed to achieve it after so many distresses and the trial we have had to get this far.

“I think it will be a much better tourist attraction than what we have had in the past because we have now got a venue to go to.

“We are linking down to Weston Wharf where we have got Stonehouse Brewery and so there is actually a reason to travel on the train, not just to enjoy the scenery.

“The businesses down there are looking forward to welcoming our passengers as well.”

Ms Morgan said it was “exciting” for Oswestry and an achievement to open the railway to Weston Wharf.

She said: “I am just really excited about Oswestry because it is such an achievement to open the railway to here.

“It is all based on volunteers, I can imagine it has been a huge engineering and bureaucratic challenge to bring it to fruition.

“It is exciting for the brewery as well and I hope everybody has really enjoyed today and I am really excited to open the plaque and the station formally.”