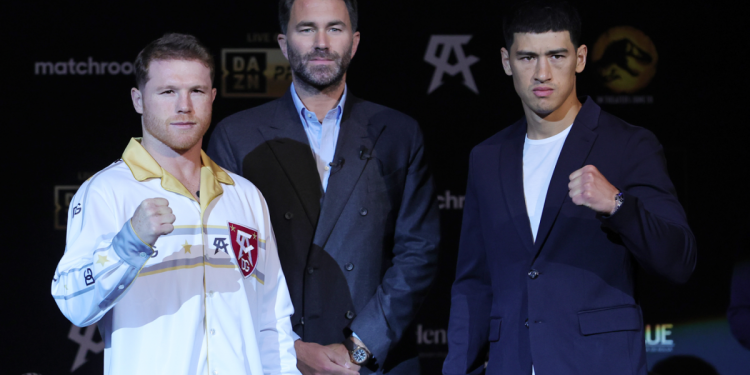 For a fighter who is just 5-foot-8 and made his pro debut at 140 pounds, one would think there is a limit to how high he can eventually rise in weight and still be effective. Luckily, for pound-for-pound king Canelo Alvarez, he doesn’t believe in limitations of any kind.

Fresh off a 2021 fighter of the year campaign in which he became the first undisputed champion in super middleweight history, Alvarez (57-1-2, 39 KOs) will move back up to 175 pounds on Saturday to challenge WBA light heavyweight champion Dmitry Bivol (19-0, 11 KOs) inside T-Mobile Arena in Las Vegas (DAZN PPV, 8 p.m. ET — subscribe now).

Three years removed from his last light heavyweight fight, when he knocked out Sergey Kovalev to claim the WBC title before immediately vacating it, the 31-year-old Alvarez will take on Bivol during the same week his promoter, Eddie Hearn of Matchroom Sport, revealed that Alvarez might be willing to challenge for the unified heavyweight title if Oleksandr Usyk, a former undisputed cruiserweight champion, was willing to accept a catchweight of 201 pounds.

Can’t get enough boxing and MMA? Get the latest in the world of combat sports from two of the best in the business. Subscribe to Morning Kombat with Luke Thomas and Brian Campbell for the best analysis and in-depth news, including a complete preview of Alvarez vs. Bivol from Las Vegas below.

“For me, limits don’t exist so I always want more. And you never know? [Fighting at heavyweight?] Maybe.”

Before Alvarez can entertain any future offers at even larger weights, the four-division champion and pound-for-pound king must first deal with the talented Bivol, a 31-year-old native of Russia who was born in Kyrgyzstan and went on to enjoy a decorated amateur career.

Bivol is often looked at as a safe fighter who relies on his footwork, defense and technique to outbox opponents from distance. But can he dig in and throw caution to the wind against Alvarez if the fight calls for it? It’s a proposition Bivol might need to consider after seeing Alvarez consistently move up in weight and incredibly carry his power up with him.

“Sometimes, if you are doing good at something and this is fine to win the fight, you should do it again,” Bivol told CBS Sports. “Sometimes, it’s not enough and you have to create something new and have to take something from you deep and show it in the ring. Some opponents do it with you when you have to show more and I think Canelo is that fight where I have to show all of Dmitry Bivol.

“In sparring, I can do it. I have enough power. I am 175 pounds and I think I can do everything in the ring if I want and if I believe.”

Alvarez compared the challenge of Bivol to a combined pair of recent opponents, saying he expects a mixture of Kovalev and Gennadiy Golovkin. But it seems Alvarez is anything but worried about the power Bivol possesses. The Mexican superstar has never been down as a pro and has only been visibly hurt once in a 2010 fight against Jose Miguel Cotto, the older brother of future Alvarez foe Miguel Cotto.

“No, I don’t remember [ever being seriously hurt]. Never, never in my life,” Alvarez said. “One time, when I fought Cotto’s brother, I felt it maybe in my legs but never [before or again] in my head.

“I have the perfect sparring partners for me in the job so that’s why I can adapt myself to that kind of style against a tall fighter.”

For Bivol, who captured his title in 2017 before making seven defenses against the likes of Sullivan Barrera, Isaac Chilemba, Jean Pascal and current WBO champion Joe Smith Jr., the Alvarez fight represents the culmination of a life-long journey.

“When I came to pro boxing, I said to my team that I want to fight the best to make my own history,” Bivol said. “Canelo is the pound-for-pound king now so it’s important to me to prove to myself what I can do against the best in the ring. I hope I can do good things in the ring.”

Three more bouts fill out the undercard inside the T-Mobile Arena. Zhilei Zhang and Scott Alexander are set for a heavyweight clash after Filip Hrgovic was forced to withdraw from his scheduled bout against Zhang. Montana Love is set to return at junior welterweight when he takes on Gabriel Valenzuela. And welterweights Shakhram Giyasov and Christian Gomez are set to scrap it out.

Zhang, the 39-year-old native of China, is undefeated at 23-0-1 with 18 knockouts so far in his career. He’s coming off a TKO of Craig Lewis last November on the undercard of Canelo vs. Plant. Love, meanwhile, is also undefeated at 17-0-1 as a junior welterweight with nine knockouts to his name. He picked up four massive wins in 2021 that included three TKOs.

Below is all the latest information for the light heavyweight showdown set for the T-Mobile Arena in Las Vegas. Plus, the latest fight card news and rumors with the latest odds provided by Caesars Sportsbook before getting to a prediction and pick for the main event.

Alvarez might deserve more credit for going out of his way to challenge Bivol than he received in any other fight amid his current run of so boldly daring to be great. Bivol has trap fight written all over him for Alvarez and is statistically, according to CompuBox, among the sport’s leaders in jabs landed per round and fewest punches landed overall by his opponents.

Although Bivol isn’t a huge knockout threat, he’s an excellent combination puncher whose adept at playing chess for 12 rounds. He mixes in body shots well and controls the terms of fights from distance about as well as anyone in boxing.

The biggest issue for Bivol is that he’s too content at times to box at a boring pace and doesn’t tend to take chances unless his opponents force him to. Expect Bivol to control the early rounds as Alvarez looks to navigate distance and work his way inside. The question will eventually become whether Alvarez can hurt Bivol to the body and get in close enough range to break him down.

If Bivol is willing to try and make Alvarez pay for advancing, this is where the fight will get interesting. At some point, against the right fighter, Alvarez will find himself at an extreme disadvantage after giving up so much height and reach. One has to wonder whether this is the fight where Alvarez bites off just a bit more than he can chew against someone so technically proficient.

No one tends to ever really look good boxing against Bivol. If Alvarez is unable to bother him with his power, the same potential is there for him to look just as ordinary and pedestrian should he get caught in Bivol’s web of steady jabs and clean counter shots.

All of this recent talk about cruiserweight and even heavyweight is ambitious, but moving up to cherry pick only really works when you target fighters with gaping holes in their game where the smaller fighter can use advantages such as bad to expose them. This, simply, isn’t that type of fight. Pick: Bivol via MD12

Everything you said about Bivol is correct. He’s got a great jab, he can range find and pump it with some power. It can be effective, it can be consistent, it serves a lot of functions. But he doesn’t have a lot of creativity behind it. He’s not a razzle dazzle puncher. He’s just got hardcore, well established basics. I think a guy like Canelo, you marvel at his power, you marvel at the fact that he’s never been knocked down, but the thing that gets lost in it is that he’s one of the smartest fighters that we have. He’s just a genius.

Who wins Canelo vs. Bivol? And which prop is a must-back? Visit SportsLine now to see Brandon Wise’s best bets for Saturday, all from the CBS combat sports specialist who crushed his boxing picks in 2021, and find out.

Mickey Gilley, the country music hitmaker and an inspiration behind Urban Cowboy, is dead at 86 – Daily Mail

Mickey Gilley, the country music hitmaker and an inspiration behind Urban Cowboy, is dead at 86 - Daily Mail