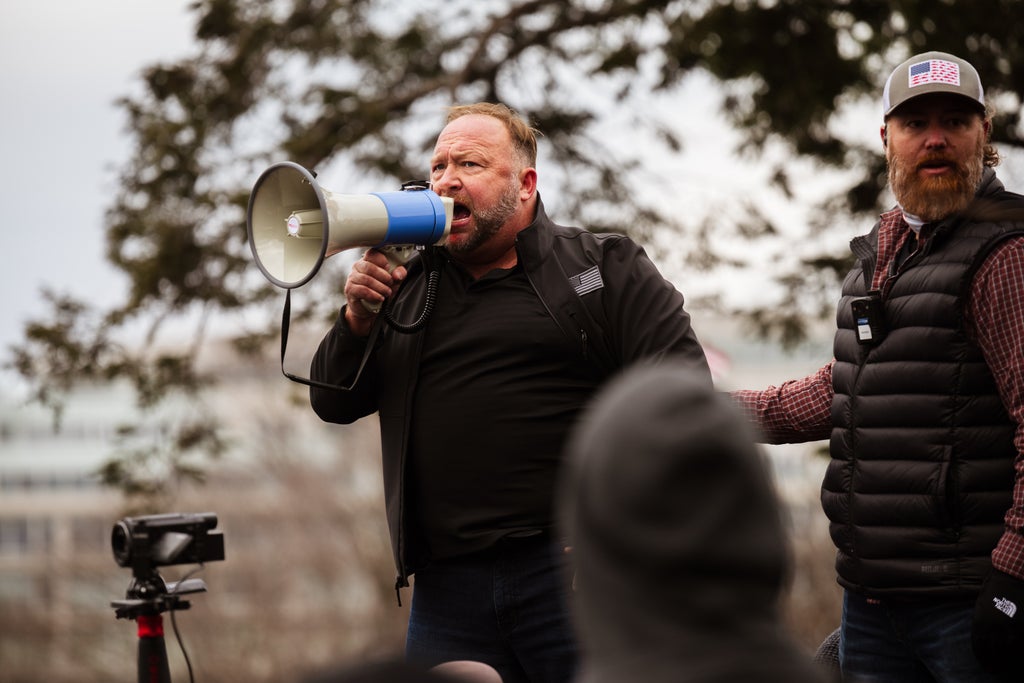 The House select committee investigating the 6 January insurrection has issued subpoenas to conspiracy theorist Alex Jones, former Trump adviser Roger Stone, and several other Trumpworld figures connected to the worst attack on the Capitol since the 1814 Burning of Washington.

One of the subpoena recipients, Taylor Budowich, currently serves as the communications director for Mr Trump’s “Save America” political action committee and his official post-presidency office. Two others — Dustin Stockton and Jennifer Lawrence — were reportedly involved with Women for America First, the political advocacy group which had a major role in planning the rally on the Ellipse at which former President Donald Trump spoke just before rioters began breaking into the Capitol in hopes of stopping Congress from certifying then-President-elect Joe Biden’s electoral college victory.

The select committee’s chairman, Mississippi Representative Bennie Thompson, said the committee “is seeking information about the rallies and subsequent march to the Capitol that escalated into a violent mob attacking the Capitol and threatening our democracy”.

“We need to know who organised, planned, paid for, and received funds related to those events, as well as what communications organisers had with officials in the White House and Congress,” Mr Thompson said. “We believe the witnesses we subpoenaed today have relevant information and we expect them to cooperate fully with our effort to get answers for the American people about the violence of January 6th.”

Mr Jones, an Austin, Texas-based conspiracy theorist who hosts the far-right Infowars streaming programme, has long had a relationship with Mr Stone, a veteran GOP political consultant and self-described dirty trickster who in 2019 was convicted on five counts of making false statements to federal investigators, plus a count of witness tampering and obstructing an official proceeding, for lying to FBI agents working with former special counsel Robert Mueller and pressuring another witness to do so by threatening his dog. His prison sentence was commuted by Mr Trump just before it was set to begin in mid-2020, and Mr Trump issued him a full presidential pardon just before leaving office on 20 January.

In a letter accompanying the subpoena ordering Mr Jones to produce documents and appear for a deposition on 6 December, Mr Thompson wrote that his investigation and public reporting “have revealed credible evidence of your involvement in the events within the scope of the Select Committee’s inquiry”.

“As you have stated, the White House told you on or about January 3, 2021, that after the Ellipse rally ended on January 6th, you were to lead a march to the Capitol, where President Trump would meet the group.’ You did in fact march from the Ellipse rally to the Capitol, accompanied by Ali Alexander (also known as Ali Abdul Razaq Akbar) and others. When you arrived at the Capitol, you were recorded telling people not to be violent and to gather on the east side of the Capitol to hear President Trump speak. That location coincided with a site for which Mr Alexander’s Stop the Steal had organised and obtained a permit fora ally that day, though using the name “One National Under God,” Mr Thompson wrote, adding that a guest host on Mr Jones’ programme stated that the protesters intended to be “occupying the entire area” and “if necessary storming right into the Capitol”.

In a similar letter to Mr Stone, Mr Thompson noted that the former Trump campaign adviser “reportedly used members of the Oath Keepers as personal security guards, several of whom were reportedly involved in the attack on the Capitol and at least one of whom has been indicted”.

Mr Stone’s subpoena requires him to provide documents and appear to give evidence at a deposition on 17 December.

401(k) and IRA Contributions: You Can Do Both