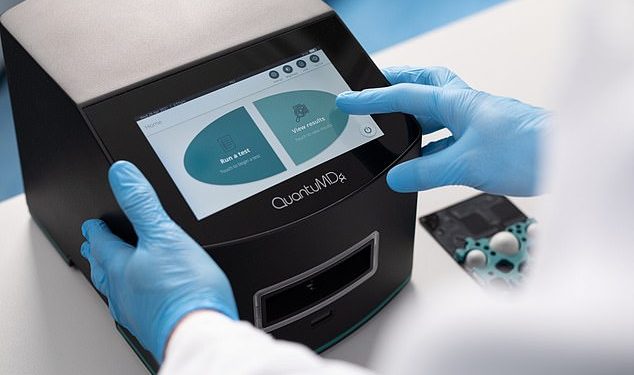 
Care bosses have called for rapid point-of-care Covid tests to be brought into retirement homes to slash the number of staff isolating unnecessarily.

Current rules in England mean any staff member who tests positive on a lateral flow has to isolate at home until the result is confirmed by a PCR — which can take up to four days, according to an industry survey.

Some 11,000 staff were absent with Covid last month and experts say the move to ditch visitor limits will inevitably allow the virus to keep circulating in homes.

Care home bosses are now calling for rapid PCR tests — which are as accurate as a a standard PCR and don’t need to be sent to a lab — to be rolled out nationwide.

They work by putting swabs into a machine that gives results within half an hour —  but they are still being trialled in the NHS and can cost up to £20,000 per device.

The devices are designed for use by people with no clinical training and have already been rolled out in some private hospitals.

The survey by medtech firm QuantuMDx of nearly 100 homes in the UK found 86 per cent of managers, owners and employees said they would be in favour of bringing in the machines.

Mike Padgham, chair of the Independent Care Group (ICG), said any new way to cut down isolation times ‘would be worth its weight in gold’. 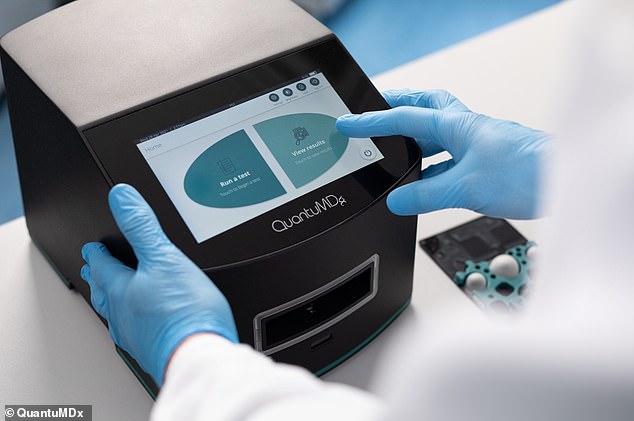 Care bosses today called for rapid point of contact testing to be brought into homes to prevent hundreds of staff having to isolate for four days unnecessarily. Pictured: QuantuMDx’s rapid Q-POC test 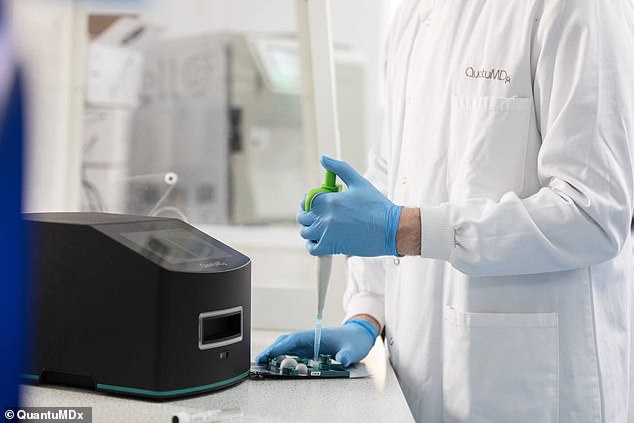 From last Monday, those living in care homes in England will be able to have unlimited visits from family and friends, the Government has said, meaning they will be able to reunite with loved ones they may not have seen for months.

The Government first announced the end to national restrictions on care home visits in November.

However, it then imposed a limit of three named visitors, plus an essential caregiver, when the Omicron variant hit.

That about-turn has been prompted by warnings of crippling staff shortages if it was put in place.

Individual homes will however continue to be able to set their own visiting policies.

And while the news has broadly been welcomed, homes currently with outbreaks will not be able to lift restrictions immediately and there are concerns others may continue to restrict visits or not have enough staff to cope with an increase in visitors.

Other changes include care homes only having to follow outbreak management rules for 14 rather than 28 days.

Self-isolation periods will be cut from 14 days to 10 days for those who test positive – with further reductions if they test negative on days five and six.

Isolation periods for those in care following an emergency hospital visit are also being reduced from 14 to 10 days.

And staff will be asked to start using lateral flow tests before their shifts instead of weekly PCR tests from February 16.

The swab is placed in a collection tube before being transferred to a specially designed cassette that is placed in the device.

The sample is then tested following the same procedure to PCR tests, which identify certain genetic material to determine whether the virus is present.

They are designed so that they can be used by anyone and do not require clinical training to operate.

Some, such as QuantuMDx’s Q-POC, can cost up to £20,000 per device, depending on contracts with homes and hospitals.

But they do not cost anything to run other than the small price of swabbing once bought — meaning hospitals will not have to pay for the cost of lab time and resources in the same way they do with PCR tests.

An independent study found the tests spotted 96.9 per cent of positive cases and was correct in 98.3 per cent of negative results.

For comparison, rapid lateral flow tests can miss up to 40 per cent of cases, according to a gold-standard Cochrane review.

The company’s chief executive Jonathan O’Halloran told MailOnline the firm is currently in early-stage discussion with the Department of Health and NHS England to roll out the tests as early as later this year.

They have been trialled in St Georges Hospital in Tooting, London, and Basingstoke and North Hampshire Hospital.

The devices were partially funded by the Government, with a £16million grant given to help its manufacturing programme in the UK.

Mr O’Halloran told MailOnline: ‘Lateral flows are a blunt tool to pick up 50 per cent of cases.

‘In the pandemic stage that is really useful because 50 per cent of a big amount is a big number.

‘But when you start looking at endemic, you really need a more accurate tool.’

Early studies indicated lateral flow tests could miss up to around 50 per cent of Covid cases, especially when self-administered. However more up-to-date research shows the tests are more accurate than previously thought.

Rapid PCR testing would prevent cases missed by lateral flows resulting in large numbers of residents having to go to hospital for treatment, Mr O’Halloran said.

He said: ‘It is inevitable that a loosening of restrictions will lead to an increase in Covid cases in care homes.

‘The need for confirmatory PCR testing following a positive lateral flow test, and compulsory isolation pending the result, means the pressures on care homes will continue for some time.

‘Our survey shows most homes want PCR testing to happen faster, and closer to the point of need.’

No10 is planning to scrap free routine lateral flow testing for the general population in July but they will still be need in hospitals, care homes and other place where there are extremely vulnerable people.

Care home bosses say the rapid PCR tests could help them avoid continued staff crises as the country continues to emerge from the Omicron wave this winter.

Mr Padgham said: ‘Care and nursing homes are going through their worst ever staffing crisis and, in some cases, might struggle to accommodate a sudden big influx of visitors. It will be down to individual homes to decide.

‘Being able to speed up PCR testing would be worth its weight in gold. For us, staffing is far and away our biggest issue.

‘Like many other homes around the country, we’re spending a fortune each month on agency staff.

‘I’ve worked in the sector for 30 years and I’ve never seen anything like this. Many care homes are literally hanging on by their fingernails.’

Unlimited visits from family and friends from today.

Care homes only having to follow outbreak management rules for 14 rather than 28 days.

Self-isolation periods will be cut from 14 days to 10 days for those who test positive – with further reductions if they test negative on days five and six.

Isolation periods for those in care following an emergency hospital visit are also being reduced from 14 to 10 days.

Rules on restrictions on visits to care homes in Wales have been eased in the past few days.

Visitors don’t have to wear masks in loved ones’ private rooms in homes.

Testing before and after visits have been relaxed as part of the new measures.

Those admitted to adult care homes don’t have to self-isolate if they have a negative PCR test and have no symptoms.

Isolation period for residents testing positive – and close contacts – is also being cut from 14 days to 10.

Before residents had to self-isolate for two weeks after a hospital transfer.

Increased number of people able to visit at one time to maximum of 4 from no more than 2 households at any one visit and a maximum of 4 visits per week.

Booking system for all visitors including evenings and weekends.