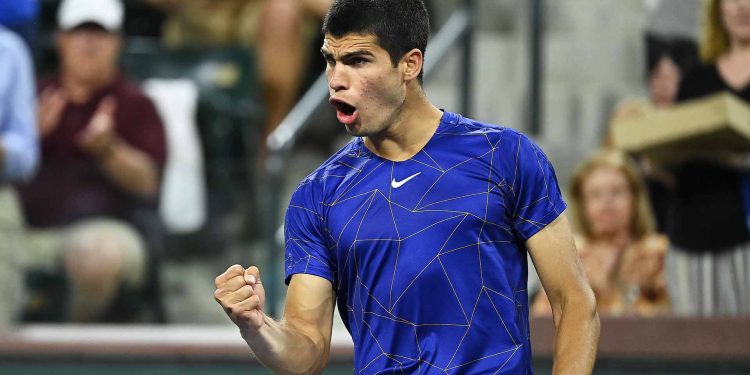 
The 18-year-old Carlos Alcaraz overwhelmed Gael Monfils Wednesday night in Indian Wells as he powered to yet another breakthrough win in his fast-rising career.

The Spaniard’s 7-5, 6-1 victory sends him into his first ATP Masters 1000 quarter-final, making him the youngest BNP Paribas Open men’s quarter-finalist since 17-year-old Michael Chang in 1989.

Now 11-1 on the season, the February Rio de Janeiro champion improves to 16-1 since his Intesa Sanpaolo Next Gen ATP Finals title run in November. He also improves to 1-0 against the 35-year-old Monfils.

Alcaraz’s constant pressure — both on the scoreboard and in the rallies — began to pay off in a big way off late in the opening set. Constantly on the attack with his ground game, he created a break point in three different games in the stanza. On his third chance, he converted with a drop shot, one of his 13 forehand winners in the opener, to lead 6-5.

The Spaniard closed the set — and soon after, the match — with ease. He did not face a break point on the night, winning 84 percent (36/43) of his service points in the one-hour, 17-minute contest.

With Monfils on his heels, Alcaraz’s again used his touch to earn an early break in set two. After scrambling well beyond the baseline, Monfils could only watch another drop shot float over the net to put him in a 1-0 hole.

“The drop shot is a [weapon] that I have,” he said of one his favourite tactics. “It’s good to have it in the tough moments, in the close moments, to use it. It helps.”

Both men produced heavy hitting throughout, but the Spaniard’s consistent depth and immense spin penetrated the court to far greater effect. While Monfils’ free hitting reaped some early rewards, it was Alcaraz who controlled the bulk of the rallies.

The Frenchman’s game began to break down as the Alcaraz assault continued. As more errors crept in, the Spaniard completed a run of seven straight games to run out to a 4-0 lead in the second set. He closed the match with his fourth break of the evening.

Monfils, a champion in Adelaide in January, entered the match on a high after upsetting World No. 1 Daniil Medvedev in the third round. Many are tipping Alcaraz to reach the top of the ATP Rankings himself, and he showed why in a dominant performance on Stadium 2.

“I’m going to be happy if I keep the level [from tonight],” Alcaraz said after his scintillating showing, “but I always say that you can improve every day, you can do better every day.”

What does ‘Erin Go Bragh’ mean and how to pronounce it?