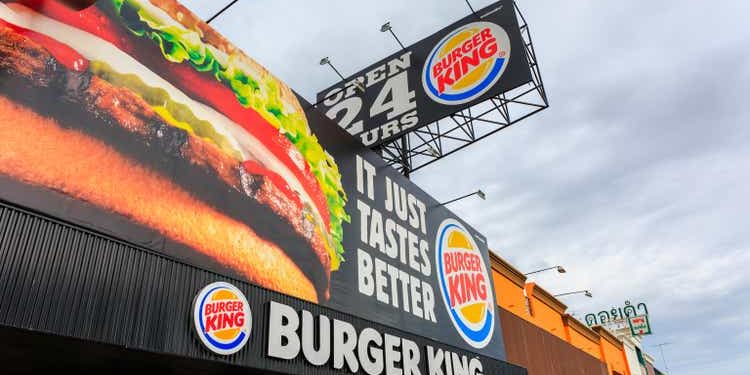 
It’s been a tough two-year period for the restaurant group, and the worst could still be to come. This is because the industry has to lap the government stimulus boost from Q2 2021 in the upcoming quarter while discretionary budgets are pinched. However, we should finally see clearer sailing toward the end of the year as tough comps are lapped, assuming we don’t see further industry-wide headwinds. One name hit harder than peers is Carrols Restaurant Group (NASDAQ:TAST), and with TAST down 85% from its highs, some investors might be anxious to take a bite. However, while its valuation has improved, I still see far better bets elsewhere in the market.

Just over six months ago, I wrote on Carrols Restaurant Group, noting that while the stock had significant upside potential if sentiment in the restaurant industry were to turn around, it was a much higher-risk way to buy the dip. This is because, as a franchisee, it was seeing a significant hit from commodity and wage inflation, and there didn’t seem to be any end in sight to these trends, leading to a dip in margins. Since then, industry-wide headwinds have worsened, and staffing still remains well below pre-pandemic levels, with Carrols underperforming its peer group and suffering a 50% drawdown from my most recent article. Let’s take a look and see whether this sharp correction has finally made it a name worth owning.

Carrols released its Q1 results in May, reporting quarterly revenue of $399.5 million, a 2% increase from the year-ago period. This was driven by higher menu price increases and reduced promotional activity offset by a sharp ~7% decline in traffic in the period. However, it’s important to note that while traffic trends were negative and same-store sales growth was low at Burger King, the 1.6% comp sales growth lapped difficult comps from the year-ago period (14.7%) and government stimulus despite headwinds from Omicron. Hence, the sales performance was satisfactory given the circumstances.

Looking at Popeye’s, same-store sales were up 2.2%, which lapped a relatively easy comp of 0.5% in the year-ago period. This was weaker than I had expected, but Carrols’ stores outperformed Popeye’s system (restaurants not run by Carrols) by 610 basis points, an impressive feat. The same was true for Burger King, which beat by 160 basis points, helped by growth in average check. The only negative was that most of this check growth was from menu pricing, which is obviously a less attractive way to grow average check, given that 7%-plus menu pricing per year is not sustainable.

The good news is that given Burger King and Popeye’s mix of value and convenience and the fact that they’re trade-down options in a tougher macro environment, menu pricing may be high, but it’s unlikely to lead to much of a shift in consumer behavior. Instead, I would be more worried about casual dining traffic trends, with dining out ranking low on value at most brands and potentially an easier cut in a period when discretionary budgets are shrinking. So, while there wasn’t any reason to be elated with Carrols’ Q1 results and the macro environment is concerning (weaker consumer), it’s solidly positioned with two iconic brands benefiting from a trade-down effect, similar to Yum Brands (YUM) with KFC and Taco Bell.

That said, while sales were up year-over-year and are projected to increase to 4% year-over-year, the margin performance has been more difficult to over look. In fact, adjusted EBITDA slid to $4.3 million in Q1 2022, down from $19.9 million in Q1 2021, and adjusted restaurant-level EBITDA margins dipped to 5.6% of restaurant sales vs. 10.1%. This led to another net loss in the period, with Carrols’ net loss coming in at $7.2 million, continuing multiple consecutive years of negative annual earnings per share.

As discussed in previous updates, the restaurant industry is battling a proverbial hurricane of headwinds, with new headwinds seemingly being thrown at operators each quarter. It began with traffic declines due to COVID-19, which impacted demand. This was followed by commodity and wage inflation which impacted margins, and just when sales had recovered, we’ve seen new headwinds to impact demand. These most recent ones are rising gas prices and rising mortgage payments, with gas prices hovering near $4.80/gallon and mortgage rates at multi-year highs. Neither are positive for restaurant traffic, with consumers’ discretionary budgets shrinking.

However, in the case of quick-service operators with strong brands, I expect the demand headwind to be more muted given the value and convenience proposition, especially in the summer months during a period of increased travel. This places Carrols in a better position than peers like Red Robin (RRGB), BJ’s (BJRI) Restaurants, and Cracker Barrel (CBRL), which may need to resort to discounting to increase demand. Additionally, Carrols did note some green shoots, which were as follows:

Obviously, these are big “ifs.” Plus, better recent labor stats aside, the restaurant industry is still 6% below its pre-pandemic peak employment levels. Still, if Carrols can see improved turnover rates, this would mean lower hiring/training costs and slightly lower labor costs, given that premium pay is being doled out to team members performing higher-level tasks. So, assuming this trend in turnover metrics is sustainable, assuming commodity inflation has peaked, and assuming demand doesn’t pull back slightly due to a weaker consumer, we may have seen the worst from a margin standpoint for Carrols.

These are too many “ifs” to rely on, and I certainly would not rely on them all coming to fruition immediately. Still, if a better 2023 is ahead and the industry is seeing sentiment at its worst levels in years, there’s some reason to be optimistic about a potential bottom for Carrols. Having said that, while Carrols isn’t expensive, I wouldn’t argue there’s a massive margin of safety here either. This suggests that there are safer bets out there than rushing into the stock above $2.10. Let’s take a closer look at TAST’s valuation below:

As the chart below shows, Carrols has historically traded at an EV/EBITDA multiple of 16 (three-year average) and currently trades at 18x FY2023 EBITDA estimates, which is only a reasonable valuation if the company can put meaningfully grow annual EBITDA. This discount relative to names like Wingstop (WING) at ~24x EV/EBITDA is mostly due to Carrols’ franchisee model vs. many other restaurant stocks with more franchised models, contributing to lower EBITDA margins for Carrols.

Assuming Carrols can return to pre-pandemic EBITDA margin levels (~8.0%), the stock looks cheap, and the stock could see 45% upside to $3.05 per share. In my view, this is highly unlikely over the medium-term. In fact, given the industry-wide headwinds, a more conservative multiple might be 14x EBITDA. This still points to share price upside for Carrols if margins recover, but if I wanted to bet on a turnaround at Burger King US, I think the much safer way to play it is with Restaurant Brands International (QSR).

My preference for owning Restaurant Brands Internationalover Carrols is based on several points. The first is that RBI is a 100% franchised model with much higher unit growth, meaning that it’s seen less impact on its earnings from commodity/wage inflation. Meanwhile, its unit growth outlook is helped by its recent acquisition of Firehouse Subs. This brand may make up a small portion of its system at ~4%), but it has considerable whitespace with just 1,200 restaurants, and is ranked No. 1 among food quality in the QSR sandwich category.

Meanwhile, Tim Hortons appears to be on the road to recovery and is its home market’s (Canada) No. 1 most trusted brand. Importantly, Tim Hortons’ value menu (~$1.50 large coffee) could benefit from a trade-down effect in a recessionary environment. Just as importantly, while fast food may be addicting, and most of RBI’s brands offer value and convenience (Popeye’s, Burger King, Tim Hortons), caffeine is a drug and even more addicting. So, while some disciplined QSR guests might be able to cut one Whopper out of their budget per month, I see a much lower likelihood of them giving up their on-the-way-to-work or lunchtime coffee (Tim Hortons).

Looking at the chart above, Restaurant Brands has historically traded at ~27x earnings, a premium multiple similar to that of McDonald’s (MCD) and Yum Brands (YUM), which benefit from highly franchised models and iconic brands. Given the industry-wide headwinds and more difficult macro backdrop, I believe an earnings multiple of 20 is more conservative or a 25% discount to its historical valuation. However, even at 20x earnings, I see a fair value for RBI of $66.60 (FY2023 earnings estimates: $3.33), translating to high double-digit annualized returns on a total return basis after adding in the ~4.2% dividend yield. So, while Carrols may have more upside, RBI looks like a much more attractive bet.

Moving to the technical picture, Carrols remains locked in a steep downtrend, and its support level has moved lower to $1.40 after breaking below key support at $1.90 earlier this year from Q1 2020. Meanwhile, it now has a new resistance level at $2.40, with the stock rejected at this level multiple times in June. With TAST currently trading at $2.10, its reward/risk ratio comes in at an unfavorable 0.43 to 1.0 ($0.30 in potential upside to resistance and $0.70 in potential downside to support). So, while TAST might be cheap, it doesn’t yet meet my criteria from a technical standpoint. To meet this criterion (6 to 1 reward/risk ratio), it would need to dip below $1.53.

Carrols has survived a very difficult period for restaurant operators, benefiting from two iconic brands (94% Burger King and 6% Popeye’s) and its long-time CEO Dan Accordino’s experience. However, with Accordino retiring, the restaurant industry remaining in difficult shape, and the stock locked in a steep downtrend, I still see this as a high-risk bet for investors. To be fair, Carols‘ new CEO, Paulo Pena, is very accomplished (ex-COO Salina). Still, I see Restaurant Brands International as the far superior option for more risk-averse investors. This is because investors are getting dividends to wait for a turnaround in industry-wide sentiment and receiving better diversification with four iconic brands (Burger King, Firehouse Subs, Popeye’s, Tim Hortons).