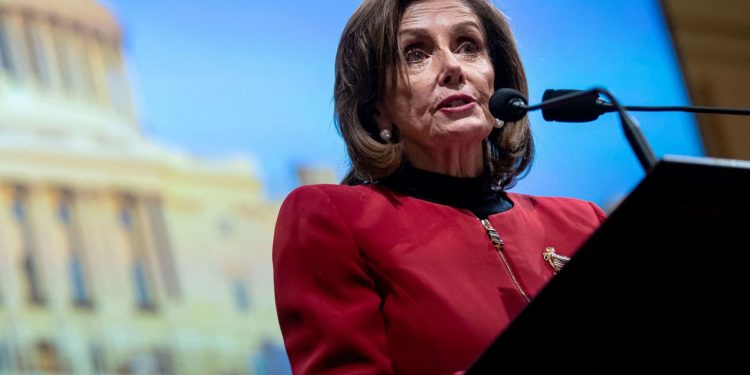 U.S. House Speaker Nancy Pelosi speaks at the start of a discussion with historians on how to “establish and preserve the narrative of January 6th” on the one-year anniversary of the attack on the Capitol in Washington, January 6, 2022.

The Roman Catholic archbishop of San Francisco has ordered priests in the archdiocese to deny House Speaker Nancy Pelosi the sacrament of communion because of the California Democrat’s support for abortion rights.

Archbishop Salvatore Cordileone’s move to bar Pelosi from receiving the Eucharist in churches in her home district comes as the Supreme Court is expected within weeks to overturn the constitutional right to abortion embodied in the 49-year-old court decision Roe v. Wade.

“After numerous attempts to speak with Speaker Pelosi to help her understand the grave evil she is perpetrating, the scandal she is causing, and the danger to her own soul she is risking, I have determined that she is not to be admitted to Holy Communion,” Cordileone wrote in a tweet.

Most Catholic bishops have been loathe to deny communion to politicians who support abortion rights.

Cordileone’s order applies only to priests in his diocese, not to priests elsewhere. Pelosi could still receive communion in a church outside San Francisco.

Cordileone notified Pelosi on Thursday that because she supports “legal abortion she is not to present herself for Communion, and that should she do so, she is not to be admitted,” the Catholic News Agency reported.

In a letter to priests in the archdiocese Friday, Cordileone wrote, “There are those who speak of such actions as I am taking as ‘weaponizing’ the Eucharist.”

“However, this is simply application of Church teaching.  One would have to demonstrate that a person’s actions in following Church teaching is explicitly for a political purpose in order to justify the accusation of ‘weaponizing’ the Eucharist,” Cordileone wrote.

“I have been very clear all along, in both my words and my actions, that my motive is pastoral, not political,” he added.

Pelosi said last month that the controversy over her support for abortion rights “really gets me burned up in case you didn’t notice, because again I’m very Catholic, devout, practicing, all of that. They would like to throw me out. But I’m not going because I don’t want to make their day.”

In a 2008 interview with C-SPAN, when asked about the possibility of being denied communion because of her views, Pelosi said, “Fortunately … it has not been withheld and I’m a regular communicant so that would be a severe blow to me if that were the case.”

CNBC has reached out to Pelosi’s office requesting comment on the archbishop’s announcement denying her communion.

Communion is an essential sacrament of Catholic practice. Worshippers receiving it during Mass as what is believed to be the literal body of Jesus Christ. The sacrament emulates the words he spoke as he shared bread and wine with his apostles at the supper the day before he was crucified.

The Vatican last year warned U.S. bishops against a move to deny communion to President Joe Biden, a Catholic who supports abortion rights.

Pope Francis, the leader of the Church, in September strongly implied that bishops and priests should not deny communion to anyone.

“I have never refused the eucharist to anyone,” Francis said at the time.

“If we look at the history of the church, we will see that every time the bishops have not managed a problem as pastors, they have taken a political stance on a political problem,” the pope said.

“What must the pastor do?” Francis added. “Be a pastor, don’t go condemning. Be a pastor, because he is a pastor also for the excommunicated.”

U.S. bishops at their conference last fall did not pass a declaration that politicians who support abortion rights should be denied communion.

But the bishops did approve a statement that said they are responsible “to work to remedy situations that involve public actions at variance with the visible communion of the Church and the moral law.”

An invitation to her dream pop world