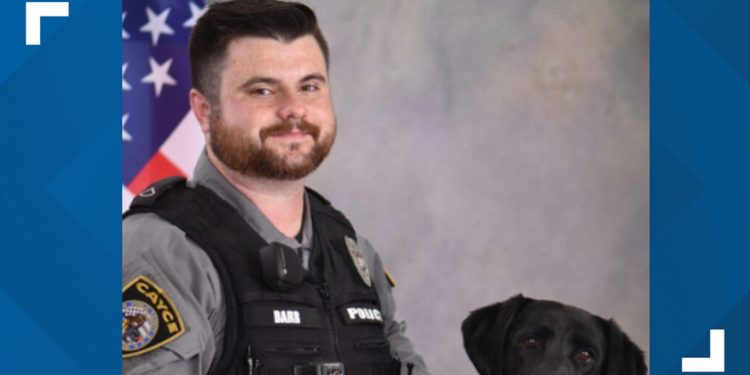 Three officers responded to the scene and made contact with the suspect, according to officers.

CAYCE, S.C. — Cayce Police say one of their officers was killed in the line of duty early Sunday morning while on a call for service.

Officers confirmed just after 7 a.m. that Cayce PSO Roy Andrew “Drew” Barr died in the incident. Cayce Police Chief Chris Cowan is  set to speak on the shooting at any moment. News19 will have live coverage when those remarks begin.

Cayce Mayor Elise Partin did briefly tell reporters that she was calling on the community for prayer.

“All of our Cayce officers, our Cayce team, and, our Cayce citizens mourn with officer Barr’s family

At 2:48 a.m., officers say they got a call of a domestic disturbance. Three officers responded to the scene and made contact with the suspect, according to officers.

At some point, police say the suspect opened fire and shot Barr.

“At this time, our City, our Cayce Police Department, our officers and our community mourn the loss of Cayce PSO Roy Andrew “Drew” Barr,” the agency said in a statement.

Information on Cayce Police’s website says Barr was a member of the department’s K-9 team, and that he’d been partnered with his current dog since October of 2019.

This is a developing story. News19 will post more details when it becomes available.

Tyson Fury retired from boxing, still wants special-rules fight with Francis Ngannou: ‘It will be a clash of … – MMA Fighting

The hidden long-term risks of surgery: ‘It gives people’s brains a hard time’ – The Guardian

The hidden long-term risks of surgery: ‘It gives people’s brains a hard time’ - The Guardian