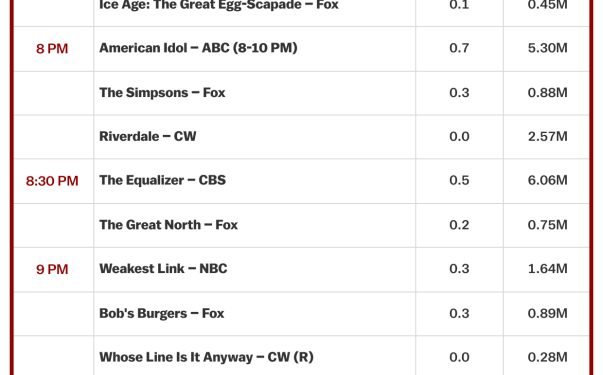 
CBS was the clear winner of Sunday primetime with its slate, consisting of 60 Minutes, The Equalizer, NCIS: Los Angeles and S.W.A.T.

The network’s primetime programming started a tad later due to overrun coverage of the 2022 Masters golf tournament. Starting at 7:30 p.m. instead of 7, 60 Minutes was the highest-rated and most-watched program of the night, per fast affiliates. 60 Minutes returned to nearly near the previous week’s Grammys coverage with a 0.8 rating in the 18-49 demo and 8.48 million viewers. In the first hour of primetime, competition wasn’t too stiff with America’s Funniest Home Videos (0.5, 4.50M), repeats of The Simpsons and American Song Contest, and Ice Age: The Great Egg-Scapade.

ABC touted a new episode of American Idol (0.7, 5.30M) which picked up a bit in the demo from the previous Sunday installment, which was up against the Grammys. Idol was ABC’s best program of the evening. In the same hour, Fox shared new episodes of its Animation Domination slate with The Simpsons (0.3, 880,000), which remained steady. For The CW, Riverdale (0.0, 2.57M) rose slightly in viewers.

At 8:30 p.m., The Equalizer returned with Chris Noth’s final episode on the CBS series. The actor was fired from the show following accusations of sexual assault by multiple women. He has since denied the allegations. Read Deadline’s recap on how Noth and his character were written out of the show. Starting at the same time, The Great North was stable.

Monday will feature a music-filled primetime. NBC and ABC will boast their respective singing competition series, while CBS airs the CMT Music Awards. Fox and The CW carry on with regular programming.

You’re muted… or are you? Videoconferencing apps may listen even when mic is off