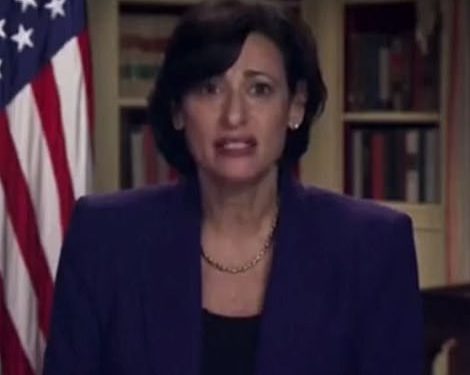 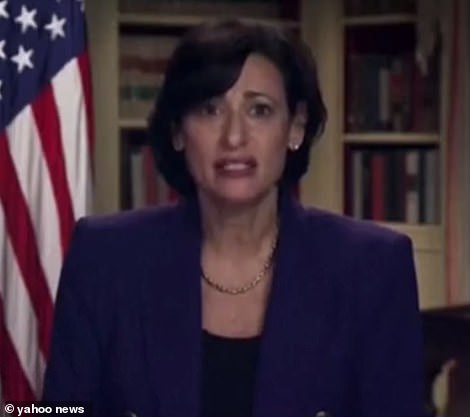 Dr Rochelle Walensky (pictured), director of the CDC, acknowledged on Wednesday that Americans are ‘anxious’ to return to normal as Covid cases are down 35% over the past week. European countries like the UK, Denmark and now Sweden has laid out plans to lift all pandemic-related Covid measures

Covid cases are continuing to fall in the U.S., and as some countries in Europe begin dropping pandemic-related mandates, American officials are showing no signs of wanting to do the same.

On Thursday, Sweden joined the list of countries to lay out plans to lift all restrictions next week. With daily infections falling rapidly and deaths starting to crest in America, many are hoping the U.S. will soon follow suit as the Omicron variant-fueled surge continues to wind down.

The Nordic nation joins the UK, Norway, Denmark and Switzerland as countries that have either lifted all restrictions or set plans in place to do so in the near future.

A bombshell study was published by Johns Hopkins University on Wednesday as well, finding that Covid related lockdowns in the U.S. only dropped deaths by 0.2 percent while also having potentially disastrous effects to sectors of the American economy.

On Wednesday, Dr Rochelle Walensky, director of the Centers for Disease Control and Prevention (CDC) said that she ‘[knows] people are anxious’ to return to normal life, but that it is not yet the right time to do so. The agency was asked later in the evening by Yahoo News to clarify her comments.

‘This comment was made in response to a question on if people can change their habits for gathering in groups or going to bars and restaurants. Dr. Walensky recognizes that many people are anxious to get back to these activities and no longer have COVID-19 disrupt their daily lives,’ a Walensky spokesperson wrote.

During the briefing, Walensky laid out what metrics her agency is looking at to decide when it is time to start lifting mitigation efforts and declare the country past the pandemic.

‘We really do have look to our hospitalization rates, and our death rates, to look to when it’s time to lift some of these mitigation efforts,’ she said.

According to official CDC data, 133,626 Americans are hospitalized with the virus every day – a 16 percent drop over the past two weeks. That figure is likely inflated, as well, as many Covid-positive people who are going to the hospital for other treatments are added to the tally.

The U.S. Department of Health and Human Services reports that 79 percent of hospital beds in the U.S. are occupied, with 16 percent currently held by someone who is positive for the virus. 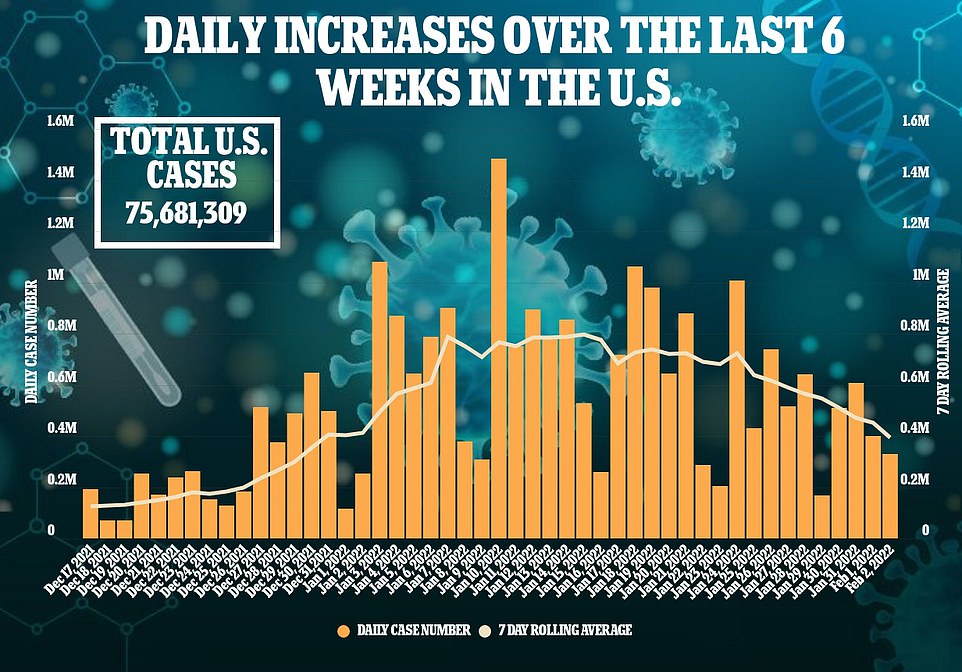 The final lagging indicator during a surge is the number of daily deaths. Covid deaths often trend the same way cases or hospitalizations will, but around two weeks behind. After growing over the past few weeks despite the massive declines in cases, it appears that that metric is starting to crest as well.

America is averaging 2,458 Covid deaths every day, a six percent increase from the 2,314 last week. While deaths are still trending the wrong direction, weekly growth has shrunk from around 20 percent to six percent every week. Similar trends were seen in cases before the rapid decline started in mid-January.

Near universally declining Covid figures has pushed many to ask when virus-related mandates in the country will be dropped. Around the country, a person has to wear a mask when flying on a plane or using transit services like Amtrak. Some localities have remaining regulations as well, like masking and vaccine checks for many indoor businesses in New York City. Many schools also still make children wear masks.

‘Society isn’t going to tolerate these things in perpetuity. The mitigation we’ve adopted has to be used to deal with epidemic peaks, not be a constant way of life,’ Dr Scott Gottlieb, former director of the Food and Drug Administration and current board member at Pfizer, told CNBC’s Squawk Box on Monday.

‘We are going to have to be willing to withdraw these mitigations.’

European governments are only building pressure upon American officials by lifting measures in their own nations. Swedish Prime Minister Magdalena Andersson announced this weeks that her country would ‘open’ on February 9, with all pandemic related measures to be lifted soon.

‘The pandemic is not over but has entered a totally new phase,’ Andersson said during a news briefing Thursday morning.

Both Denmark and the UK, both nations that were struck hard and fast by the Omicron variant and the end of last year have opted to lift all pandemic related measures as well and declare the countries ‘open’ once again. 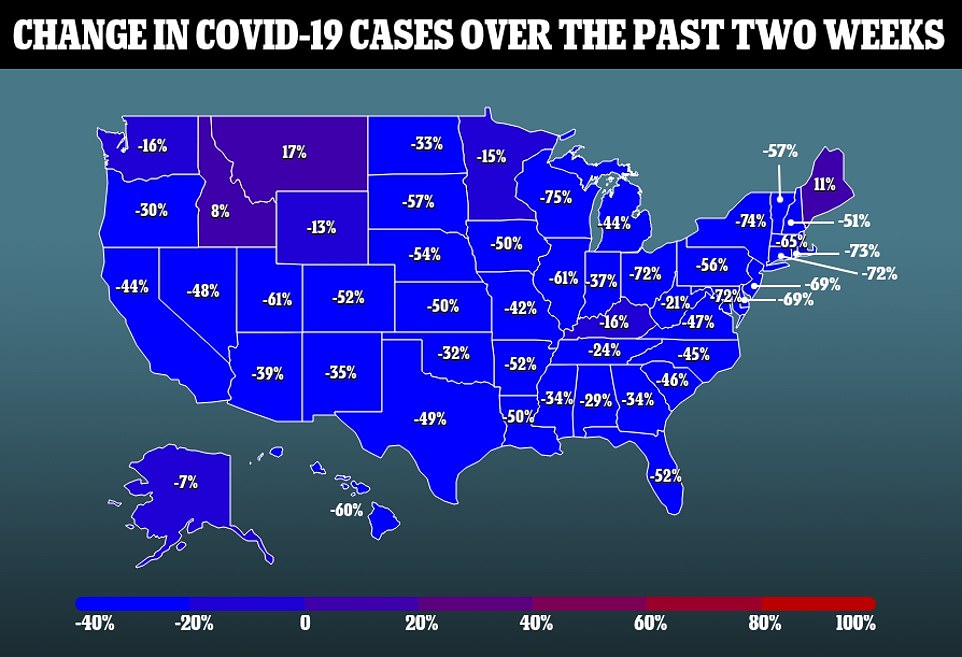 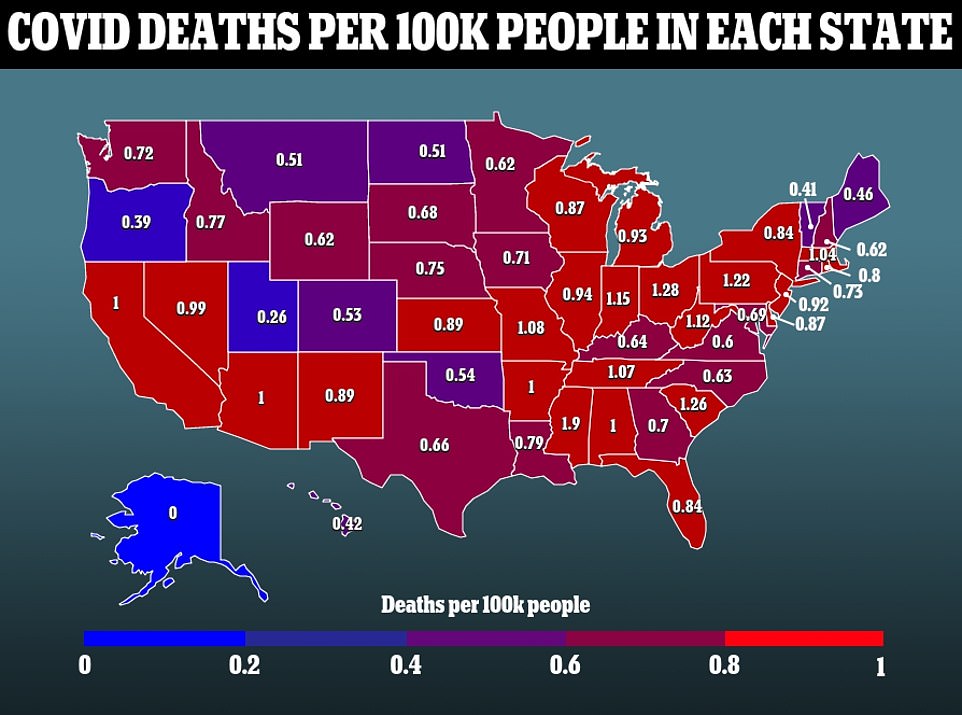 Nearly every state in the U.S. is now recording declining Covid cases over the past two weeks, a reverse of fortune from where the country was a month ago.

Only three states are still seeing cases trends upwards. One is Maine, with cases up 11 percent over the past two weeks. The state has a such a low infection rate – only 75 of every 100,000 residents testing positive daily – that the figure is likely to widely fluctuate.

All of the other 47 U.S. states are recording declining cases as of Thursday morning. Rhode Island, which once was leading the nation in infection rate for much of mid-January, has recorded a 73 percent drop in cases over the past two weeks. Nearby New York (74 percent decrease in cases over past two weeks), Connecticut (72 percent), New Jersey (69 percent) and Massachusetts (65 percent). 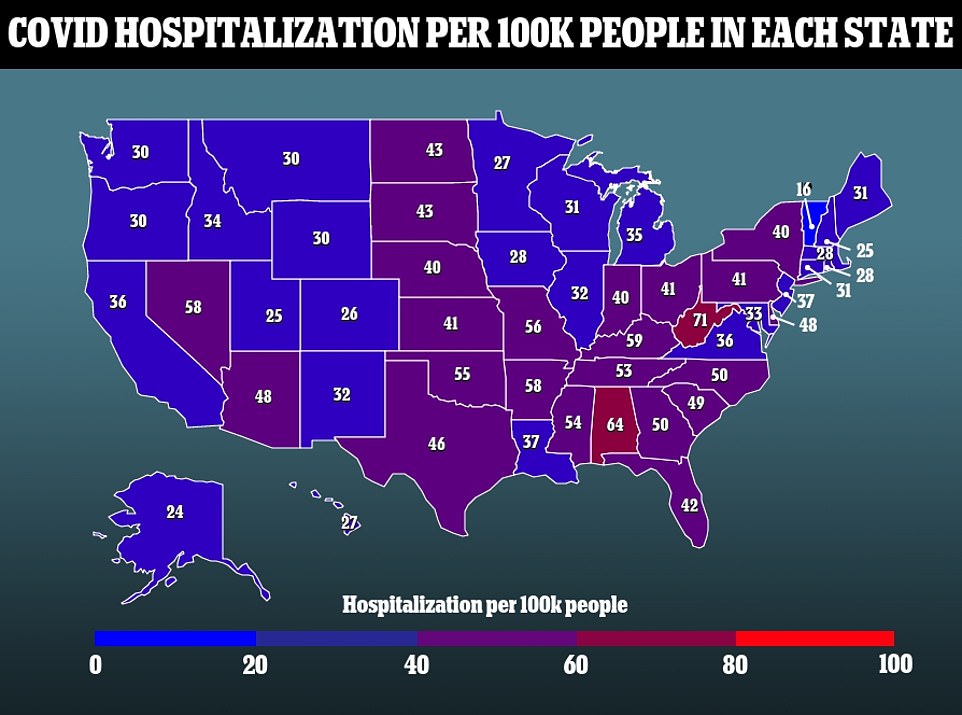 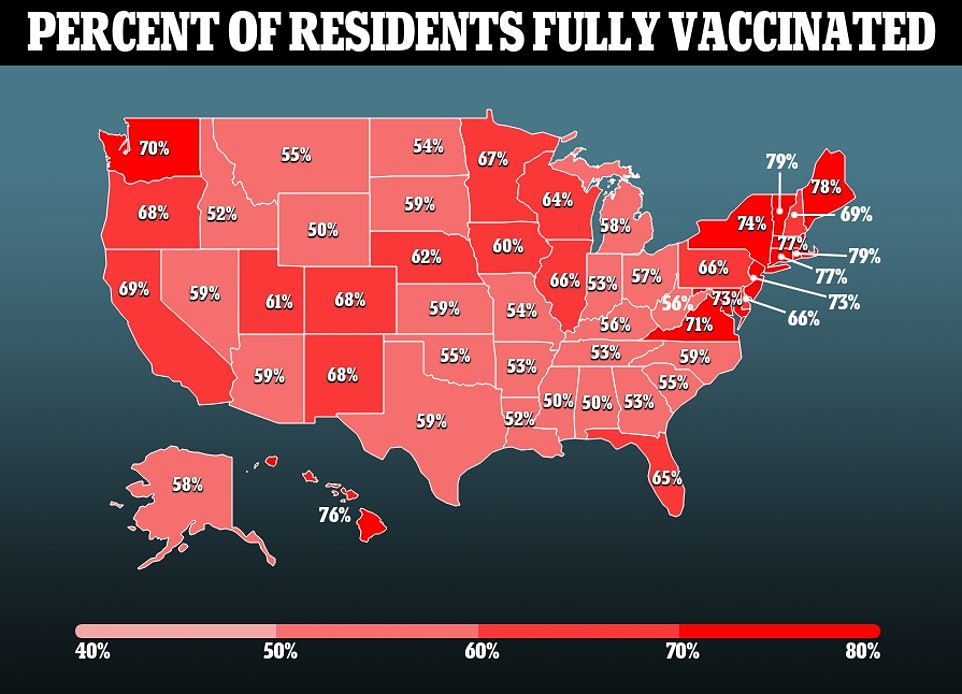 The state that has experienced the largest drop in cases over the past two weeks in Wisconsin (75 percent). Like Rhode Island, the Badger state also experienced a surge of cases in January that led to it leading the country in infection rate for some time. Now, cases are sharply falling, and nearby Ohio (72 percent), Illinois (67 percent) and Michigan (44 percent) are seeing sharp drops as well.

Minnesota was among the final northwestern states to reach its Omicron peak, but cases have finally turned around in the Gopher state as well, down 15 percent over the past two weeks.

Maryland, another state that was among those slammed early by the Omicron variant, now has the lowest infection rate in America. The state has recorded a 72 percent decrease over the past two weeks, down the 34 cases per every 100,000 residents this week. Now, 15 states are recording less than 100 daily cases per 100,000 residents.

Despite dropping cases nationwide, deaths are starting to surge in some areas. In Mississippi, one of the least vaccinated states in American with only 50 percent of residents jabbed, has had it’s daily death count jump to 1.9 per every 100,000 residents – by far the highest rate in America. 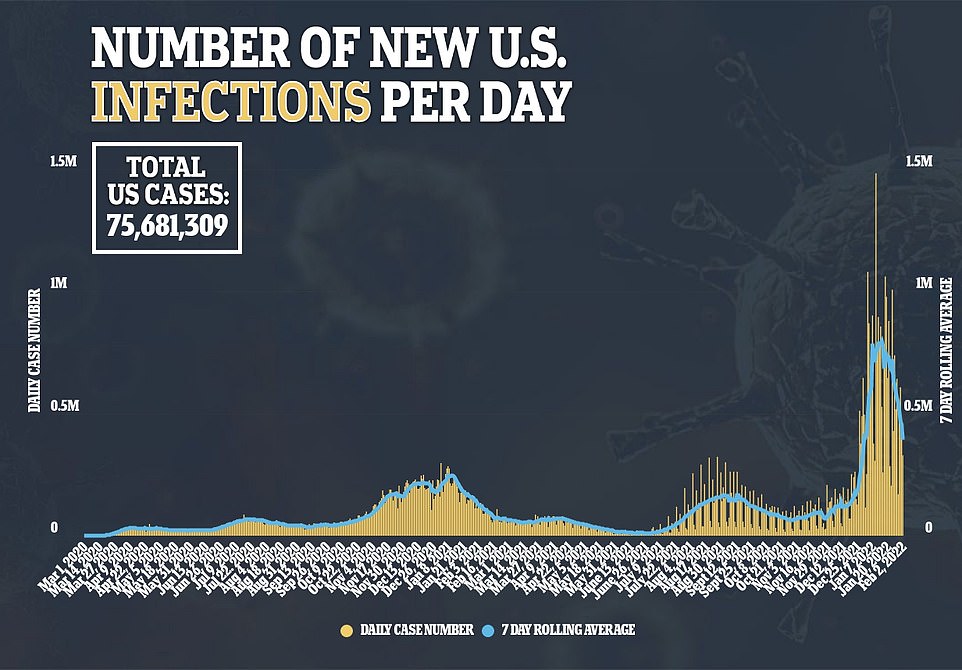 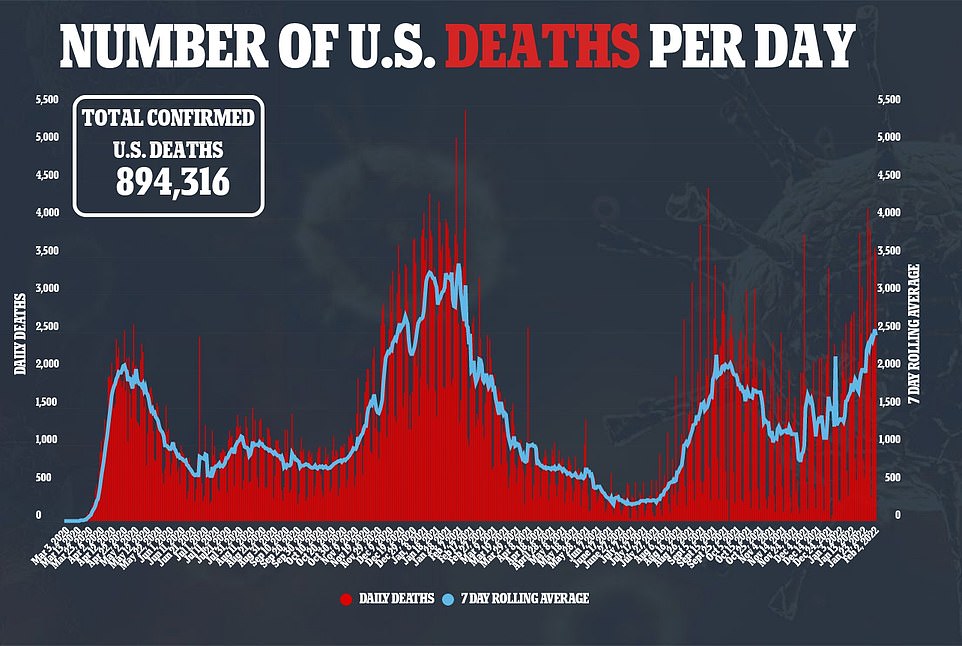 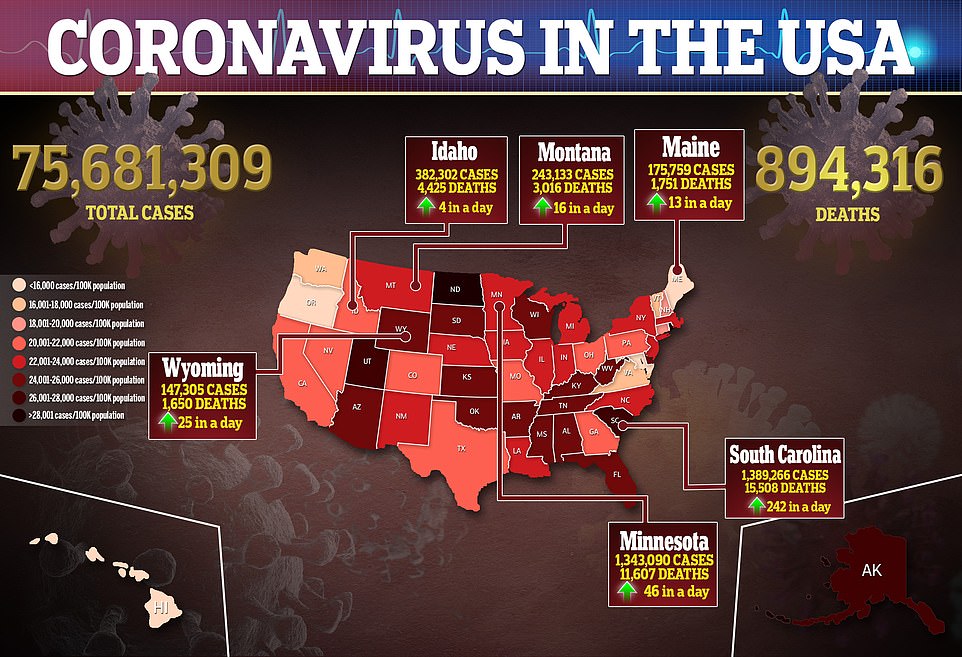 L.A. Affairs: Dim sum is meant to be shared. But I had no one