Celebs who got hitched in Vegas — and whether marriage lasted 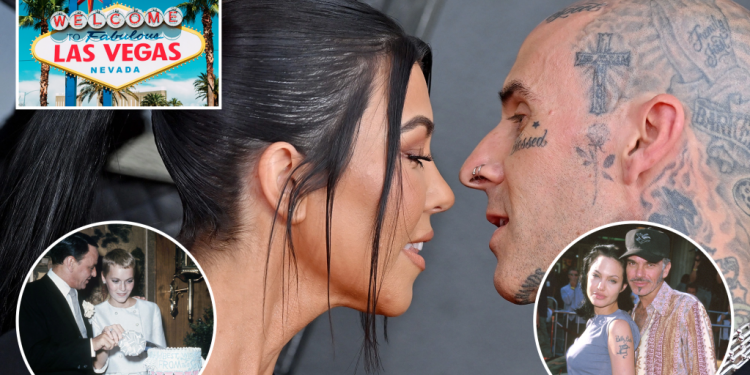 
The scent — or stench — of romance lingers in the Las Vegas air, mixed in with the heady aroma of at-risk cash, funky cigar smoke and all-you-can-eat buffets.

However, while the rest of of us wannabes desperately chase high-roller status, real-life celebrities are sneaking away to quickie Vegas chapels to tie the knot.

But is it a gamble — or a jackpot?

Kourtney Kardashian, 42, got hitched to her lover, Travis Barker, 46, in the City of Second Chances during the early morning hours of April 4. The Blink-182 singer and the reality star, who have been dating since early 2021 and had been friends for years prior, had a Vegas ceremony after the 2022 Grammy Awards, though they’re reportedly not legally wed yet.

But papers or not — they’re hardly the first to have surprise nuptials in the Marriage Capital of the World. Many A-listers skipped the big white weddings with cake tastings, champagne towers and a perfectly curated DJ playlist and went straight to Sin City to say “I do.”

Veteran Elvis impersonator Brendan Paul of Graceland Wedding Chapel, who married Lily Allen and David Harbour, said he married about a dozen couples a day — some who knew each other for 45 years before tying the knot, and, for others, just four to five hours.

“The main thing is: you’re in love,” Paul told The Post. “In my mind, I like to believe that they all live happily ever after. I just believe in love.”

But how long does high profile holy matrimony last in Vegas? Here are some Tinseltown couples who famously jetted off to the Strip to walk down the aisle.

The singing legend was 50 years old when he married the “Rosemary’s Baby” star, then just 21 years old. The couple wed at the Sands Hotel in Las Vegas in 1966 and split two years later. She was the third of the musician’s four wives.

The legendarily sexy and chic “Dressed to Kill” actress married the Grammy-winning “What the World Needs Now is Love” composer in 1965 at the Silver Bells Wedding Chapel. They divorced in 1981 after more than 15 years of marriage. The duo had a daughter, Nikki, who committed suicide in 2007 at the age of 40.

The A-list pair tied the knot at the Golden Nugget chapel after just three months of dating in the late 1980s. The iconic “Die Hard” action star and “Ghost” actress welcomed three daughters together and split at the start of the millennium. However, the exes are still besties to this day as he battles a reportedly career-ending illness with the support of his extended family.

The “Riverdale” stud and his longtime morning show host wife — one of the most unabashedly, some might argue obnoxiously, loud-and-proud happy couples in pop culture history — eloped after a year of dating in 1996 in Sin City. The proudly thirst-trapping couple is still going strong today, and they share three kiddies together.

Lily Allen, 36, and David Harbour, 46, were married by Paul at Graceland Wedding Chapel wed during the height of COVID-19.

Despite the fact that the British pop star had come to Graceland by way of a three-week sojourn on a yacht in Croatia — a loophole that allowed Allen get around some pandemic travel restrictions — she and the “Stranger Things” actor were “so down to Earth,” Paul told The Post.

The pair reportedly went for In-and-Out Burger with Allen’s two young daughters after the ceremony, but not before snapping a few pics with the ordained doppelganger. “We were very happy that ‘The King’ would [deign] to take pictures with us,” Harbour later recalled.

The Oscar winner skipped down the aisle twice in Nevada. He married Erika Koike in March 2019 and filed for an annulment a mere four days later. He was granted a divorce in June of that year.

The “Honeymoon in Vegas” actor later wed Riko Shibata (who is currently pregnant with his third child), at the Wynn hotel in a small ceremony in February 2021.

Griffith was just 14 years old when she met Johnson, then 22, on the set of their 1973 movie “The Harrad Experiment,” also starring her mom, Tippi Hedren. The forbidden lovers were soon bunking up and, when the “Lolita” star turned 18, tied the knot with the Golden Globe-winning actor at a small ceremony in Las Vegas in 1976.

The pair divorced after six months, with the young starlet going on to date Ryan O’Neal, then marry her “She’s in the Army Now” co-star Steven Bauer — and had one son before they split in 1989. Meanwhile, Johnson was tied to actress Patti D’Arbanville, with whom he shared one son.

However, Griffith and the “Miami Vice” star gave it another go just months after her divorce — and became parents to daughter Dakota Johnson on October 4, 1989. In 1994, they split for good. Griffith soon found herself in the arms of her third husband Antonio Banderas and wed the Spaniard in 1996. They divorced in 2015 after sharing one child. Johnson married his current wife Kelley Phleger in 1999.

Crawford went on to marry businessman Rande Gerber in 1998, and they have two children together — Kaia and Presley. Gere subsequently married Bond girl Carey Lowell and then activist Alejandra Silva.

The philanthropist and the “Monster’s Ball” actor married in Vegas in 2000 after starring in the flick “Pushing Tin” together just a year prior. Jolie was two decades younger than Thornton, and they parted ways in 2003.

The couple can mostly be remembered for their very exposed PDA moments on the red carpet. One such moment was when they would wear vials of each other’s blood during various events.

These high school sweethearts grew up together in Middlesex County, NJ, long before John Francis Bongiovi from history class became Bon Jovi the rock star. “If I got one thing right back in high school, it was falling in love with this girl,” Bon Jovi said of his 40-year crush on Instagram in 2021.

The pair did part ways for just four years as the future Rock & Roll Hall of Famer launched his career. But the “I’ll Be There For You” singer reportedly begged her to take him back. Despite a heartbroken female fan base, they eloped at the Graceland Wedding Chapel on April 29, 1989, during a stop on the band’s Jersey Syndicate Tour. The ride-or-die duo has four — now-adult — children.

After a wild evening in Sin City, the “Scary Movie” icon got hitched to NBA player Dennis Rodman in 1998 at the Little Chapel of the Flowers. However, just six months later, the basketballer filed for an annulment and said he was “of unsound mind when he recited his vows.” The two have remained friends since their split.

These two had their wedding officiated by an Elvis impersonator at the Starlight Chapel in 1984. The “Hello, Dolly” singer and the artist share one child, Sophie von Haselberg.

Midler and von Haselberg are still just as in love today as they were almost four decades ago.

The “Baywatch” star tied the knot with Paris Hilton’s ex (and sex tape partner!) Rick Salomon at the Mirage hotel in 2007. While the mother of two filed for divorce two months later, the duo remarried in 2014. They spit for the second time just a year later.

The iconic pop star wedded her childhood friend Jason Alexander in 2004 at A Little White Wedding Chapel. But their marriage was very short-lived as they parted ways and filed for an annulment just 55 hours later.

Judge Lisa Brown signed off on the annulment at the time and said, “They’ve made a wise decision. I know they care about each other. They are friends.”

The Jonas Brothers member and the British actress shocked fans when they ran to A Little White Wedding Chapel following the 2019 Billboard Music Awards in Las Vegas. Singer Diplo livestreamed the nuptials in the early hours of the morning on his Instagram.

The “Game of Thrones” alum and the former Disney star are currently expecting their second child together and are parents to a daughter, Willa.

The “Fury” actor and the “Emma.” star had their 2016 nuptials officiated by an Elvis impersonator and livestreamed by TMZ.

The two have had a rocky relationship over the years, and they announced they were separating in 2018. But they got back together in 2020 and just recently welcomed their first child last month.