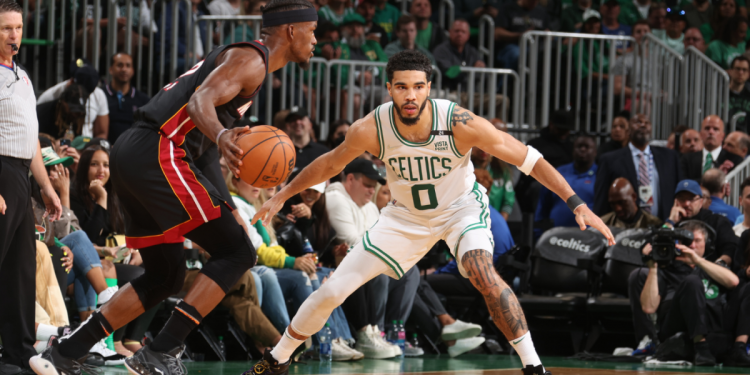 Get this: The Boston Celtics, who had the best defense in the NBA in the regular season, who frustrated Kevin Durant in the first round and Giannis Antetokounmpo in the second, who employ savvy, switchable defenders at every position, who needed a win Monday to avoid falling down 3-1 in the Eastern Conference finals, absolutely stifled the Miami Heat in Game 4.

OK, fine, not super surprising. Boston had shot itself in the foot by committing 19 live-ball turnovers in Game 3, and it had bounced back after each of its four previous losses in the playoffs.

But this was no ordinary bounceback. This was as thorough a beating as you will see in a playoff game. The Celtics led 18-1 with three and a half minutes left in the first quarter and 26-4 at the two-minute mark. The Heat missed 14 field goals before they made their first. After three quarters, Miami had scored 52 points (or 74.3 per 100 possessions) on 36.5 percent true shooting and missed 14 of its 20 3-point attempts.

Boston didn’t just make the Heat look discombobulated offensively. It made them look inept. And it did so without the Defensive Player of the Year — Marcus Smart watched from the sideline, inactive because of a sprained ankle.

After the 102-82 win, Celtics coach Ime Udoka said that they “understood we had to be more aggressive and physical on the defensive end.” He added that Heat big man Bam Adebayo had gotten going in the last game, and that “guys take that personal.”

Udoka noted that none of Miami’s starters had scored in double figures. If he had really wanted to rub it in, he could have mentioned that the five starters had combined for 18 points on 7-for-36 shooting, that two of them went scoreless and that none of them took the floor in the fourth quarter, since the outcome had long been decided.

Boston’s defensive masterclass got started when Al Horford stuck with Adebayo through a cross screen, forced him out to the perimeter and then dropped against a pick-and-roll on the game’s first possession. Roaming help defender extraordinaire Robert Williams III crowded Adebayo, forcing a pump fake, and then Horford stripped him clean:

On the third possession, when Jimmy Butler went downhill against the drop, Williams’ help forced a pass. Butler got the ball back in the corner on a dribble-handoff with P.J. Tucker, then attacked Williams on a switch. This yielded a turnaround jumper from outside the restricted area, over both Williams and Jaylen Brown:

Two days after scoring 16 points and shooting 4-for-7 from deep, Max Strus was one of the scoreless starters. This is mostly because Derrick White, starting in place of Smart, hounded him around screens, forcing him to either take a difficult jumper, settle for a floater, or get rid of the ball.

The Celtics are known for their switching, but they’ve always mixed up their coverages to keep opponents guessing and avoid certain matchups. Miami recognized that it could get into open space against the drop, but couldn’t take advantage of it with any consistency. It shot 6-for-28 from 2-point range in the first half, and those were almost entirely away from the rim.

The switching, both on and off the ball, was on point, too. If you just follow the ball on these two first-quarter possessions, you’ll notice Grant Williams staying in front of Kyle Lowry and Butler, then Payton Pritchard coming up with a steal; if you watch Pritchard the entire time, you will see Boston scram him out of mismatches against Adebayo and Butler:

Everyone who took the court for Boston contributed defensively. Pritchard, listed at 6-foot-1 and 195 pounds, is often a pick-and-roll target because of his size, but he is nothing if not feisty. Late in the first quarter, he rejected Gabe Vincent in transition, just like Horford did to Adebayo in the third:

Miami managed just two second-chance points in the first three quarters. “We felt like last game they destroyed us obviously on the boards,” Robert Williams III said, “so we just wanted to up the effort all around.” On the rare occasions that the Heat did manage to grab an offensive rebound, the Celtics kept scrambling, closing out and covering for each other. When coaches wax poetic about the importance of “multiple-effort plays,” this is what they mean:

The one Miami player who found some success creating offense was Victor Oladipo, who finished with 23 points on 7-for-16 shooting. Boston did not respect him as a floor spacer, though, and it respected Caleb Martin even less. Robert Williams III continued to cheat way off of both Tucker (the other scoreless starter) and Butler, and the groin injury that sidelined Tyler Herro hurt the Heat’s spacing along with their playmaking. When Miami tried to get to the rim, bodies were everywhere:

While Jayson Tatum created advantages out of thin air, the Heat often ran a series of actions that added up to a big bowl of nothing. One first-quarter possession ended with Vincent missing a foot-on-the-line corner 2 over Tatum, another ended with Vincent missing a turnaround jumper over Robert Williams III like Butler did earlier — it was even from the same spot. Scorers tend to be aware of the extremely athletic rim protector when attacking the basket, but the Heat challenged him on several occasions, seemingly because they did not see a better option.

The most amazing thing about this rout is that the Celtics shot miserably themselves (5-for-27 from deep in the first three quarters). It was far from the first time, though, that their defense has appeared to be an unsolvable puzzle. Now that they’re two wins away from the Finals, Udoka said that the challenge is to duplicate this performance after a victory, rather than “waiting for us to get down to kind of muster up that energy.” Shots aren’t always going to fall, but, the way he sees it, if they take care of the ball and don’t allow easy baskets, their defense will wear on Miami mentally.

Sounds pretty simple. For this team, maybe it is.