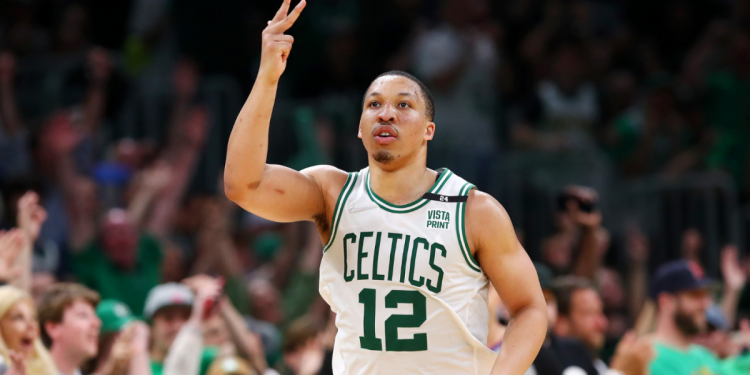 Grant Williams was hardly a 3-point threat when he entered the NBA. His teammates mockingly called him “Ben Simmons” after he missed the first 25 attempts of his career, and they hatched a plan — forgotten at the moment by everyone but Brad Wannamaker — to “pass out” on the bench when he finally got one to go.

The message during Sunday’s Game 7 was a bit different: “I told him let it fly,” Boston Celtics head coach Ime Udoka said. “They’re disrespecting you tonight.”

Williams listened, and shot his way into Boston folklore as he led the Celtics to a dominant 109-81 win over the Milwaukee Bucks, and into the Eastern Conference finals. His final line was 27 points, six rebounds and two blocks on 10-of-22 from the field and 7-of-18 from 3-point land.

“It’s tough to get in your own head when your entire team, like 15 people walk up to you and say ‘let it fly, keep shooting,'” Williams said. “For me it was just like, alright, they’re encouraging it so might as well take advantage. As time went on got more comfortable, kept shooting. Ime made a joke I shot 18 and that’s probably the most 3s I’ve shot in my life in a single game. It was fun but just great we got a win.”

The Bucks’ general defensive strategy since head coach Mike Budenholzer arrived has been to protect the paint at all costs, even if that means giving up 3s. They leaned into that approach in Game 7, and essentially spun a big roulette wheel that they hoped would land on “missed 3s.” It did not.

Williams made a wide-open 3 on the first play of the game because Lopez didn’t follow him out to the arc. That may have just been a defensive miscommunication, but the Bucks made a purposeful decision to leave Williams alone the rest of the time. Lopez camped out in the paint to prevent the Celtics from getting anything easy at the rim, and dared Williams to win Game 7.

He did just that with the best night of his career. Williams — or “Grant Curry,” as he should now be called per Jaylen Brown — knew he would have to improve his shot in order to stick around and earn playing time in the league, and on Sunday all of the effort paid off.

“Not the same thing but the bubble from my rookie year, Game 7 [against the Toronto Raptors],” Williams said. “I knew how intense that was, and being thrown in fourth quarter after not playing and then getting that stop and block on [Fred] VanVleet. I remember going through those emotions. So I was like, that’s how this night’s gonna be. You have to be prepared for the highs and the lows. If you asked me last year I probably would be head down, keep it moving, but I think the work that I’ve put in over the past year and a half, two years, three years in the league has helped put me in this position. Glory not only to God in that sense but to everyone around me.”

Williams’ shooting was the main story, but his most impressive individual moment may have come on the defensive end. He excelled there all series long, helping lead the Celtics’ efforts against Giannis Antetokounmpo. That was one of his main tasks once again in Game 7, but he also came up with two blocks, including a stellar one on Bobby Portis that elicited his most emphatic reaction.

As the Bucks tried in vain to make one last comeback, Portis got loose in transition and went hard to the basket. Williams was the only one back, and said it set up, “one of those moments that you kinda have as a kid where you’re both lining each other up and one of you’s gonna dunk on the other or the other’s gonna block it.”

Williams came out on top and let out a massive roar and fist pump — that the cameras, unfortunately, didn’t quite catch — to the ecstatic Celtics crowd.

The Celtics’ storied playoff history is filled with unsung heroes: Don Nelson hit a miracle jumper in the closing minutes of Game 7 of the 1969 NBA Finals to help secure the title; Gerald Henderson’s late steal and score sent Game 2 of the 1984 Finals to overtime, and the Celtics went on to win the game and championship; P.J. Brown came off the bench to make some huge shots down the stretch of the Celtics’ Game 7 win of the 2008 Eastern Conference finals, en route to a ring.

While the stakes weren’t quite that high on Sunday, this was still a Game 7 to eliminate the defending champs and the best player in the world, and Williams was only in the starting lineup because of Robert Williams III’s injury. No one will forget Williams’ performance any time soon, especially if the Celtics are able to go on and get another trophy.

“Grant played great tonight,” Jayson Tatum said. “And in the playoffs you need that. You need guys coming off the bench to be a star in their role. Grant won us a playoff game tonight, a Game 7. I’m extremely happy for him.”