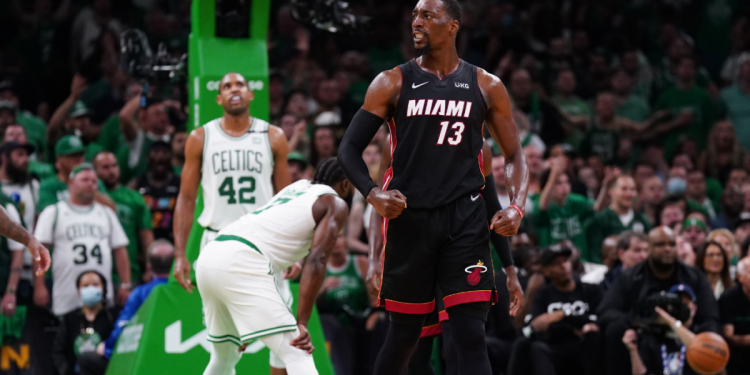 The Miami Heat stormed out to a 26-point lead over the Boston Celtics in Game 3 on Saturday night only to hold on for a 109-103 victory at TD Garden following a furious rally from the home team during the second half after Jimmy Butler had been ruled out of the game with knee inflammation. In the end, Butler’s absence during the final two quarters was not enough for Boston to pull off the comeback as Bam Adebayo finished the win with a team-high 31 points to go along with 10 rebounds, six assists and four steals.

On the other end of the spectrum, Jaylen Brown was fantastic for Boston finishing the game with 40 points and nine rebounds. While Al Horford and Marcus Smart combined for 36 points, 18 rebounds and 10 assists, the Celtics were unable to overcome a poor shooting night from Jayson Tatum as the All-Star struggled mightily from the field finishing just 3-for-14 for the night.

With the win, Miami takes a 2-1 lead over Boston with Game 4 coming on Monday night.

Here are four key takeaways from the game:

It has unfortunately been impossible to talk about this postseason, and this series in particular, without discussing injuries. Marcus Smart, Al Horford, Derrick White and Robert Williams have all missed a game in this series for the Celtics, while Kyle Lowry did not play in the first two games for the Heat.

The problem only got worse on Saturday, as Smart, Jayson Tatum and Jimmy Butler all made their way to the locker room at various points. Most notably, Butler did not play in the second half due to knee inflammation. He should be OK moving forward, however. Heat head coach Erik Spoelstra said he won’t need an MRI, and per USA Today, Butler won’t miss any more time.

Smart and Tatum actually returned to the game, despite the fact that their injuries seemed more severe. Early in the second quarter, Smart suffered a nasty looking ankle sprain that was made worse when Lowry inadvertently rolled over his leg. Later on, Tatum got a stinger during a scramble for a loose ball, and stayed down for a few minutes in serious pain. Following the game, Celtics head coach Ime Udoka said Smart and Tatum should both be good to go moving forward.

Bam Adebayo made his third straight All-Defensive team appearance this season, and would have been an All-Star and potentially even the Defensive Player of the Year if he didn’t miss an extended stretch with a thumb injury. In the first two games of this series, though, he was largely invisible, finishing with a total of 16 points, 13 rebounds and three assists.

That all changed in Game 3. Adebayo came out like a man on a mission. He was demanding the ball early and often, and hitting an array of mid-range jumpers and shots around the rim. He nearly matched his total from the first two games in the first quarter of this one, as he had 12 points to help the Heat build an early double-digit lead.

Late in the game, with Butler out of commission, he stepped up again. He scored eight points in the fourth quarter to hold off the Celtics’ comeback attempt, including a stunning off-balance jumper to beat the shot clock with 1:23 remaining. That shot pushed the Heat’s lead back up to six and ended up being the dagger.

By the final buzzer, Adebayo had 31 points, 10 rebounds, six assists and four steals in by far his best performance of the entire postseason. The Heat are going to need Adebayo playing like this if they want to finish the job against the Celtics — especially if Butler isn’t 100 percent.

3. Lowry makes an impact in his return

Kyle Lowry had not played since Game 4 of the Heat’s second-round series with the Philadelphia 76ers due to a hamstring injury, and there was no clear timeline for when he might be back. It turned out he was ready for Game 3, and his return came at the perfect time for the Heat.

While Lowry is far from his peak, he’s still a vital part of this Heat team. This was a prototypical Lowry performance, as his stats weren’t that impressive — 11 points, one rebound, six assists, four steals on 4-of-11 shooting — but he finished plus-10. came up with timely plays and got the Heat under control.

Case in point was his steal with 48 seconds remaining. While the rest of the Heat retreated after a made free throw, Lowry came flying in to steal a lazy inbounds pass from Grant Williams, then found Max Strus for a layup that ended any hope the Celtics still had.

The Heat are just better when Lowry is on the floor.

4. Celtics only have themselves to blame

The Heat were terrific to start this game, and deserve a lot of credit for how they started and then managed to hang on down the stretch without Jimmy Butler. That being said, the Celtics could have, and probably should have won this game. They shot 16 more free throws, Butler didn’t play in the second half and they had the deficit down to one, but they couldn’t get it done and they only have themselves to blame.

Once again, the biggest issues were turnovers and careless play. They were not focused nor ready to match the Heat’s intensity to start the game, which should never happen at home in the Eastern Conference finals. And while they eventually got back into the game, they never truly settled down.

They had a whopping 23 turnovers, including 13 from Jayson Tatum and Jaylen Brown — the most those two have ever combined for in a game together. The Heat took advantage in a major way, scoring 33 points — over 30 percent of their total offense — off those turnovers. In a game they lost by just six, the Celtics gifted the Heat 33 points.

In addition to the turnovers, the Celtics got another dud from Tatum, who finished with just 10 points to tie his lowest-scoring game of the postseason. He shot 3-of-14 from the field and had twice as many turnovers as made baskets. And that doesn’t even take into account his shoulder injury. Tatum has been spectacular at times in the playoffs, but he’s prone to these nightmare games that the Celtics cannot afford. If he has an even halfway decent performance, they win this game.