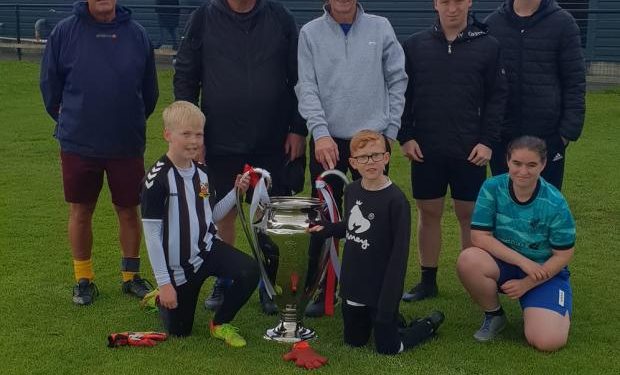 Real Madrid and Liverpool will face off for the Champions League tomorrow, May 28, competing in the final in Paris.

They will be looking to get their hands on the elusive trophy, the pinnacle for club teams in Europe.

But those at Kilwinning Sports Club managed to get their hands on the trophy, before either Jordan Henderson or Marcelo.

En route to the Stade de France today, the trophy appears to have made a quick stop off at the home of Kilwinning Rangers and many of the town’s youth football teams.

A spokesperson said: “The Champions League trophy came by the club today before heading to Paris for the final tomorrow thanks to the Coerver Football Camp for arranging.

“Here she is with some of our walking footballers.

“Also pictured is Jason Stewart, manager of the Dirrans who is hoping to borrow it again for the Donnie McManus KSC shield pre season tournament thats coming soon.”

What a site to behold, and who knows, in a few promotions time, the Buffs could be competing for the trophy themselves!

Some lucky youngsters and walking footballers got their hands on the trophy! Pic Credit: Kilwinning Community Sports Club