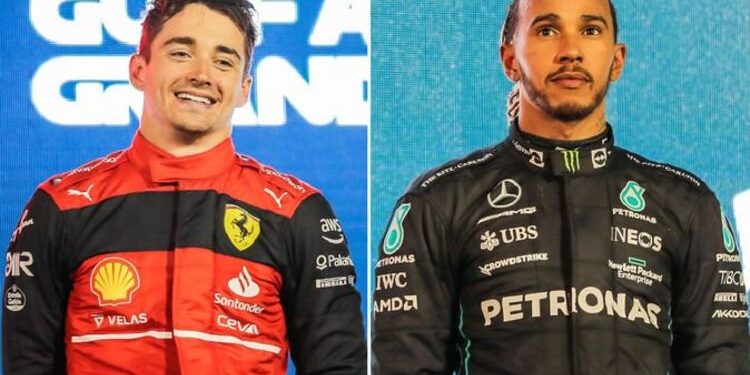 
Charles Leclerc admits Ferrari have a problem if he and Carlos Sainz end up battling each other for the Drivers’ Championship – but says it is a “very good” issue for the team to have. Seven-time Formula One world champion Lewis Hamilton is among those who have welcomed Ferrari’s revival.

Leclerc and Sainz secured a brilliant one-two finish at the curtain-raising Bahrain Grand Prix in Sakhir on Sunday. It was Ferrari’s first one-two since the 2019 Singapore Grand Prix and saw Leclerc seal the third race win of his F1 career.

Ferrari suffered a desperate 2020 in which they finished sixth in the Constructors’ Championship with Leclerc and Vettel managing just three combined podiums. But 2021 was more promising after Sainz joined as they climbed back up to third, albeit finishing 262 points behind second-placed Red Bull.

Victory in Bahrain has now fuelled hopes that Leclerc and Sainz can make a serious attempt at winning both championships this season. And the Monegasque driver says the Prancing Horse would welcome having two title contenders given they are without a driver’s title since 2007 and a team title since 2008, even though it would create headaches.

MUST READ: Sainz’s warning to Hamilton and Verstappen after Bahrain podium

“I think it’s a very good problem to have,” race-winner Leclerc said. “Coming into the season we surely knew that we were going to be in a better position compared to the past two years. But we didn’t really know where, and now we see that we are actually in the mix to fight for the title so it’s amazing.

“We are both very, very happy to have a car that is capable of winning. And we’ll fight for it, for sure.” While Sainz similarly added: “It’s a great problem to have. It’s just great news for Ferrari and for us because it’s where Ferrari should be. And it’s where Charles and I want to be in our lives, fighting for world championships.

“Before the race, Charles and I were working together and the first thing that we said to each other is how good it feels just to be starting first and third and to finally be fighting for something bigger, and together.

“So happy to see them doing well again,” Hamilton told Sky Sports. “They’re such a historic epic team so it’s great to see Charles and Carlos up there.”

He added on Twitter: “Great start to the season. We gave it our all and ended up with the best result we could have. Well done to the Ferraris, great to see them share the podium. Big week of work ahead but I know we got this.”

How to complain effectively – and get results | Consumer affairs

How to complain effectively – and get results | Consumer affairs