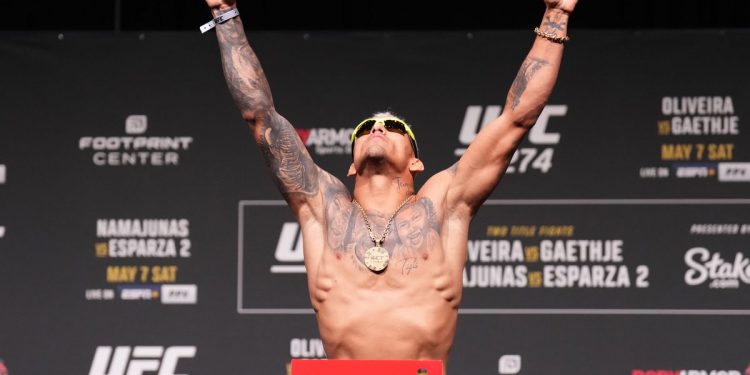 Charles Oliveira knew he was on weight for his fight against Justin Gaethje at UFC 274 on Saturday night. But when ‘Do Bronx’ stepped on the scale at official weigh-ins, the weight announced was not what he expected to hear.

Oliveira weighed in at 155.5 pounds, a half-pound over the championship limit. A stunned Oliveira was given one more hour to lose the extra 0.5 pounds, but it would not be enough as he weighed in again at 155.5 pounds. The UFC then revealed that he would not only forfeit a percentage of his purse, but would also be stripped of his lightweight title as soon as his fight with Gaethje starts.

The soon-to-be-former champion was adamant he did everything right during his weight cut, telling Megan Olivi during the ESPN ceremonial weigh-in show that he stopped eating and drinking on Thursday once he hit championship weight. So for him to miss the target outright was odd.

“The champion has a name. His name is Charles Oliveira,” said Oliveira through an interpreter. “The story is I went up to my room. I made weight on the UFC scale on Thursday night. I go up to my room, did not consume anything. No water, no food, no anything. I swear to God. In the name of my daughter, the most sacred thing in my life. I went to bed. I wake up the following day and it’s a pound over.

“I’m looking at it,” continued Oliveira. “I’m one kilogram over, actually. I’m one over and I don’t under what happened. I can’t understand. We work. We’re professionals. I did not do anything wrong. To me, it just didn’t make sense. Other fighters started talking about it as well. They started talking about those 200 grams, 300 grams and it was exactly the difference of the scale with the UFC. So, this is what we’re going back to. The champion has a name. His name is Charles Oliveira.”

Oliveira was one of several fighters to allege the test scale used at the fighter hotel was off. UFC strawweight Ariane Carnelossi told Guilherme Cruz of MMA Fighting that it had been reset before official weigh-ins, so there was a 0.5-pound differential. UFC featherweight Norma Dumont corroborated the claim, but she still missed weight by 0.5 pounds.

Though dealt an unexpected twist, Oliveira has not lost any confidence and will be more than ready to deal with Gaethje on fight night.

“If you think that this is going to frustrate me, you’re wrong. The champion has a name. His name is Charles Oliveira and I’m going to come out striking.”

UFC 274 goes down on Saturday, May 7, at the Footprint Center in Phoenix, AZ.

Should You Invest in Bitcoin