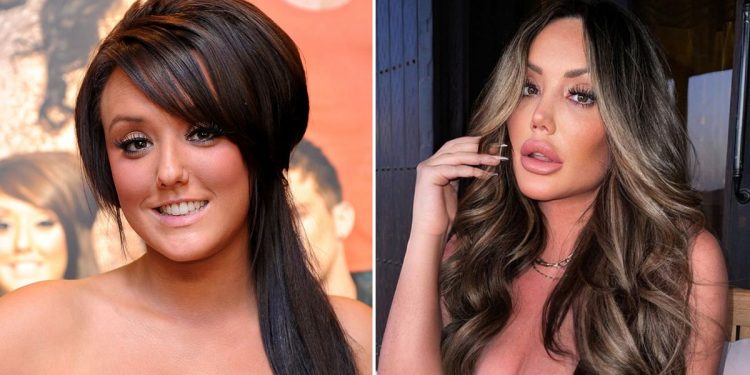 
Charlotte Crosby’s face has changed over the years since she rose to fame. Last year it was claimed that she might have spent £20K on fillers and surgery, before an expert warned ‘filler fatigue’

Charlotte Crosby on how she hid her pregnancy from her friends

In her announcement the former Geordie Shore favourite could be seen looking totally fresh-faced as she attended the first stages of the initial baby scans.

Makeup free and looking super natural in some of the clips she shared in her announcement video, Charlotte’s face can be seen up close and in detail as she hugs pals when revealing the joyous news.

Her happy news and fresh-faced glimpses come one year after reports swirled around the star and how she spent £20k on plastic surgery.

Since first shooting to fame in 2011, Charlotte looks quite different and now sports more pillowy lips and refined cheek bones.

Celebrities: What’s Happened to Your Face? was a Channel 5 programme that aired last April, and featured the young Geordie lass.

Charlotte Crosby at the beginning of career back in 2011
(

The show saw experts comment on a slew of celebs who look different before and after hitting the big time, and those experts passed comment on the MTV star.

Snaps from 2018 when that star donned a dark chocolate-hued brunette look, were assessed by the experts.

Dr Sabrina Shah-Desai commented on the star’s appearance and said: “She’s getting to visible signs of having fillers.

“Good jobs are not visible, bad jobs are extremely visible.

“You can see her lips are too full, the apple of her cheek is too big, almost like a golf ball.

In 2011 she had thinner lips, but has since had fillers
(

Dr Joshua Van Der Ar then added: “They’ve taken a bit of what we call a cookie cutter approach to filling her face where they don’t respect the natural anatomy.”

Concluding, Dr Sabrina Shah-Desai said: “Nobody’s willing to tell them they’ve gone too far, the practitioner isn’t telling them and very quickly it can go into this ‘filler fatigue’.

“This face that quite obviously looks not beautiful any more, just very plastic.”

The doctor also warned that Charlotte was at risk of looking “plastic” which she thinks could be down to her “circle of friends who think it’s acceptable.”

“A lot of people say that I look like him, so I think if he was still alive he would definitely know who I am because there’s that many articles out there saying I look like him.”

The MTV star has had both brunette and blonde hair
(

Charlotte always looks gorgeous when she steps out
(

Since appearing on MTV’s Geordie Shore for the first time back in 2011, Charlotte has undergone a dramatic transformation.

She previously admitted she is a self-confessed lover of Botox, starting in her early twenties and going on to have eyebrow tattoos so she’d be screen-ready at all times.

Charlotte also once admitted to getting a £4k nose job, and to having lip fillers too, previously revealing she got her lips done once a year, adding: “Once a year that’s it and I don’t think they’re that bad.”

We think that Charlotte looks gorgeous now and always has done.

Charlotte is now an expectant mum and recently announced her pregnancy in an emotional video alongside the words: “A moment I wasn’t sure would ever be mine Is here, it’s mine (and Jakes) and I couldn’t be happier to be sharing it with you all……I’m having a baby.”

The video showed a positive pregnancy test, leading to her cuddling and kissing boyfriend Jake.

Since the joyous news broke, fans and friends of Charlotte and her beau have been over the moon.