Chas Skelly Elbows, Knees, and Ground-and-Pounds a TKO in UFC 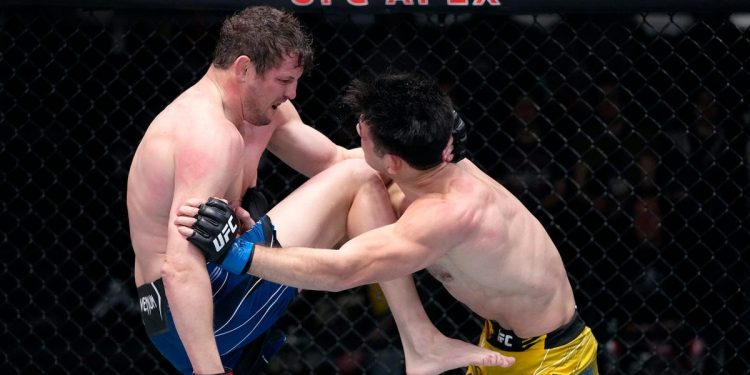 
LAS VEGAS — An elbow, knee, and ground-and-pound earned a veteran UFC fighter a brilliant finish in what was “maybe” his last fight Saturday at the Apex studio.

As a 22-fight veteran before he even entered the UFC’s Octagon in Las Vegas, fans would have been forgiven for assuming that Chas Skelly, 36, was gunning for a victory that would propel him closer to the featherweight top-15.

But little did they know that he may well have been making his last ring-walk.

If the Texan “Scrapper” really was fighting for the last time in a career that has seen him compete in Bellator, Legacy FC, and 12 UFC matches, then man, did he pick a time to shine the brightest.

Because against Mark Striegl, Skelly won the first round with greater control time, a successful taekdown, and a greater amount of shots landed.

Then, in the second, Skelly scored a knockdown with an awe-inspiring strike combination, before forcing the finish with merciless punches from the top.

“I plan on maybe not fighting anymore after this fight,” Skelly said after the result had been announced, at the event Insider attended.

“It’s been a long road. I want to go out on my own terms. My body is not holding up the way it used to. I would like to stay on the roster and if they offer me something that’s interesting, then maybe.”

It is unclear if he’ll compete again.

Elsewhere on the card, Joaquin Buckley and Abdul Razak Alhassan threw slugs in a three-round war, David Onama knocked out Gabriel Benitez in the middle of an unmissable combination of punches, and Kyle Daukaus scored an incredible buzzer-beating submission Saturday.

In the main event of the evening, Jamahal Hill finished Johnny Walker in brutal, no good, very bad fashion as the American scored one of the best knockouts of the year.