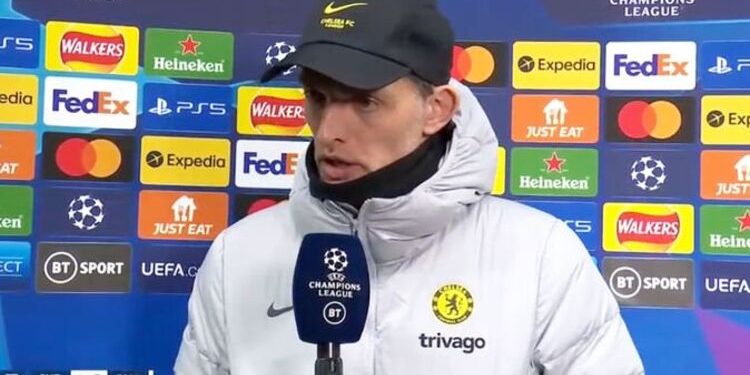 
Thomas Tuchel cut a hugely frustrated figure in his post-match interview after Chelsea were dismantled by Karim Benzema’s stunning hat-trick in their Champions League quarter-final first-leg clash against Real Madrid on Wednesday evening. The Blues will need to overturn a two-goal deficit in next week’s return leg at the Bernabeu in order to book their place in the semi-finals of this year’s competition after failing to cope with the threat of Benzema over the course of the first 90 minutes.

Tuchel was understandably irked after the final whistle and made his feelings clear in a tetchy post-match interview with BT Sport reporter Des Kelly. The Chelsea boss appeared to be confused when quizzed on whether he was ‘downbeat’ in the immediate aftermath of proceedings at Stamford Bridge before firing back with a firmly-worded response.

“Well, what do you expect? To stand here and smile or what? Of course I am down,” he snapped. “No, we don’t have to go to Madrid, we have to go to Southampton. I think this is very, very important we process this.

“It’s crucial we go to Southampton, and I will make sure everyone processes this because if we play like this, we will lose in Southampton and then we don’t need to think about the Bernabeu because we will get hammered in the Bernabeu.”

Wednesday’s result gave Chelsea a mountain to climb ahead of next week’s decisive second leg in the Spanish capital to dent their hopes of winning back-to-back Champions League titles at the end of the season. Tuchel went on to slam the collective effort of his players by insisting that he was deeply unhappy with their failure to deal with Benzema’s presence in attack during the first half of the match.

The Real Madrid marksman was on top form and scored two headers in quick succession to hand the visitors an early advantage before Kai Havertz slashed Chelsea’s deficit with a goal of his own before the interval. Benzema went on to complete his hat-trick shortly after the restart when he capitalised on Edouard Mendy’s calamitous error before sliding the ball into an empty net to secure an impressive victory for Los Blancos.

“It’s a heavy loss, one of the worst first-halves I’ve seen from us at Stamford Bridge,” added Tuchel. “At this level you cannot play like this, individually and a team, from all of us it was not enough.

“We were not doing what we are used to do, it was far from our standards. Everything, when we pass, where we pass, attacking, possession game, the intensity and desire to win challenges, how we closed spaces.

“The first half was so far from any standards we set ourselves that we cannot complain when we lose like this.”

Want the latest Premier League news as we publish it on Express Sport? Join our Facebook group by clicking here