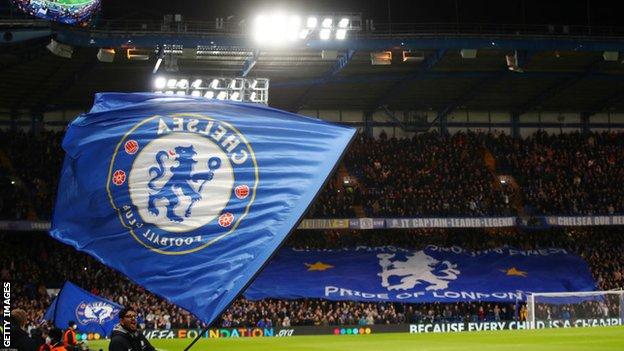 
Chelsea owner Roman Abramovich says he is planning to sell the club.

In a statement on the Premier League club’s website, businessman Abramovich said it was an “incredibly difficult decision to make”, which “pains” him.

The Russian will not ask “for any loans to be repaid” and proceeds of the sale will be donated to war victims.

On Saturday, Abramovich said he would give “stewardship and care” of Chelsea to its foundation trustees following Russia’s invasion of Ukraine.

That led to speculation he would put the club up for sale and earlier on Wednesday, billionaire Hansjorg Wyss told Swiss newspaper view he had been offered the chance to buy the west London club.

Wyss said Abramovich wanted “to get rid of Chelsea quickly” after the threat of sanctions was raised in Parliament.

Abramovich, 55, is alleged to have strong ties to Russian President Vladimir Putin, which he has denied.

He says “all net proceeds from the sale” will be donated to the “victims of the war in Ukraine”.

BBC Sport understands that Abramovich has already received offers for Chelsea and that he values the club at as much as £3bn.

In his statement, Abramovich added: “I have always taken decisions with the club’s best interest at heart.

“In the current situation, I have therefore taken the decision to sell the club, as I believe this is in the best interest of the club, the fans, the employees, as well as the club’s sponsors and partners.

“The sale of the club will not be fast-tracked but will follow due process. I will not be asking for any loans to be repaid.

“I have instructed my team to set up a charitable foundation where all net proceeds from the sale will be donated. The foundation will be for the benefit of all victims of the war in Ukraine.”

BBC Sport understands that the trustees of Chelsea’s charitable foundation, who had not yet agreed to take control of the club, will no longer be asked to. Abramovich was criticised for not referencing Russia’s invasion of Ukraine in that original statement on Saturday.Chelsea’s players were not told ahead of time about their owner’s new statement, which was released less than a hour before the side’s FA Cup fifth-round tie at Luton Town.

Abramovich bought Chelsea in 2003 for £140m, and he says it has “never been about business nor money, but about pure passion for the game and club”.

Since his purchase of the club, Chelsea have been transformed, setting the template for how much finance was needed to compete at the top end of the Premier League.

In total, Abramovich has loaned the club more than £1.5bn, which has helped to bring great success.

Under his ownership, the club have won every major trophy possible – including the Champions League twice, both the Premier League and FA Cup five times, the Europa League twice and the League Cup three times.

In August 2021, they won the Uefa Super Cup and in February won their first Club World Cup.

Their high profile has seen world stars such as Australia’s Sam Kerr and Danish forward Pernille Harder move to the club.

Why has Abramovich chosen to sell?

Other Russian billionaires have already been the subject of European Union sanctions where their assets have been frozen.

That has included Russian billionaire Alisher Usmanov, who has commercial links to Everton.

The United Kingdom government is yet to sanction Abramovich or Usmanov, but Labour MP Chris Bryant said in Parliament on Tuesday that Abramovich was “terrified of being sanctioned which is why he is going to sell his home tomorrow [Wednesday]and another flat as well”.

On Wednesday, during Prime Minister’s Questions, Labour leader Keir Starmer asked why Abramovich was not facing sanctions, with Boris Johnson replying it was “not appropriate to comment on any individual cases at this stage”.

Wyss also said: “Abramovich is trying to sell all of his villas in England, he also wants to get rid of Chelsea quickly.

“I and three other people received an offer on Tuesday to buy Chelsea from Abramovich.”

A spokesperson for Abramovich declined to comment on those claims.

‘One of the most significant, controversial and influential figures in history of English football’ – analysis

While this was not an entirely unexpected development after it became apparent during the last 24 hours that Roman Abramovich was looking to sell Chelsea, this dramatic announcement still feels like a seismic moment. Not only for the west London club, but for the wider English game too.

The oligarch’s riches turned Chelsea into a major force in the game, and his ownership seemed to pave the way for subsequent takeovers by overseas billionaires, at clubs like Manchester City for instance.

But there was significant controversy too.

With Abramovich – one of Russia’s richest people – almost never commenting in public, he also came to symbolise the detachment of some super-wealthy club owners. Many also found the ruthlessness with which he treated managers questionable.

There was always intrigue surrounding the motives for his ownership, and how he made his fortune. While he has always denied direct links with Putin, the invasion of Ukraine led to calls in parliament for the government to sanction wealthy Russians.

Abramovich vehemently denies that he had done anything to merit sanctions being imposed against him. But as the highest-profile oligarch in the country, and with one MP citing concerns about alleged links to corruption, his ownership was coming under mounting scrutiny.

And with the government facing mounting pressure to seize his assets, and Abramovich criticised over his failure to explicitly condemn Russia’s invasion, it is little surprise that he has swiftly announced his decision to sell.

In recent years Abramovich has been an increasingly infrequent visitor to Stamford Bridge, withdrawing his application for a visa in 2018 after relations between the UK and Russia worsened.

But while fans had got used to not seeing Abramovich, the Russian’s departure could mean the club is run very differently in future – and perhaps with much more financial constraint – by whoever now buys it.

That may help explain why some at Chelsea will no doubt be sorry to see him go. Many other observers, however, will be pleased, especially given the continuing conflict in Ukraine.

He departs as one of the most significant, controversial and influential figures in the history of English football.

Trying to value a club is always challenging. I calculated valuations for all Premier League clubs in 2020 which valued Chelsea at about £1.2bn.

Chelsea have also lost more money than any club in the history of the Premier League, so it would be difficult from a financial perspective to justify the reported £2bn price tag, especially given its stadium is much smaller than rivals from the ‘Big Six’.

However, If there is a willing buyer and a willing seller, then a deal is normally straightforward once due diligence from both parties has taken place.

If assets are frozen or sanctioned then it comes down to the nature of the sanctions, which may or may not prevent an individual or company taking money and/or assets out of the UK.

Chelsea’s £1.5bn debt is owed by Abramovich’s company Fordstam to another of his companies, Camberley International Investments, based in the British Virgin Isles, so to an extent Abramovich is both the borrower and the lender. However, he now says he will “not be asking for any loans to be repaid”.

So from a financial point of view, football clubs are not always great investments. But for those looking to buy a club as a trophy asset, where the rewards, such as winning leagues and cups and the kudos and fame that it brings, then they may feel that a club is a worthy investment.

26 February: Abramovich announces he is handing “stewardship and care” of Chelsea to its charitable foundation.

27 February: Foundation members express concern over whether Charity Commission rules would allow them to run the club. Chelsea beaten 11-10 on penalties by Liverpool in League Cup final at Wembley after game ended 0-0.

28 February: Abramovich asked by Ukraine to help support their attempts to reach a “peaceful resolution” with Russia.

1 March: The Charity Commission says it is “seeking information” from Chelsea after the club was placed under the control of its charitable foundation.

2 March: Swiss billionaire Hansjorg Wyss claims he has been offered the chance to buy Chelsea from Abramovich.

2 March: Abramovich announces he intends to sell the club.

‘It can take months or years’

Former Newcastle and England striker Alan Shearer on BBC One: “It’s a huge moment for Chelsea. He has brought massive success over his 20 years but it is not simple, selling a football club. It can take months or years.

“But more importantly, there is still no condemnation from Roman or the club about what is happening in Ukraine.”

Former Manchester City and England defender Micah Richards on BBC One: “It is a better statement than Saturday, there is a lot more clarity and Roman Abramovich has done the right thing.

“It is so sad we have to talk about this on a football night after all the scenes we have seen. It is heartbreaking. The sooner it happens the better.”