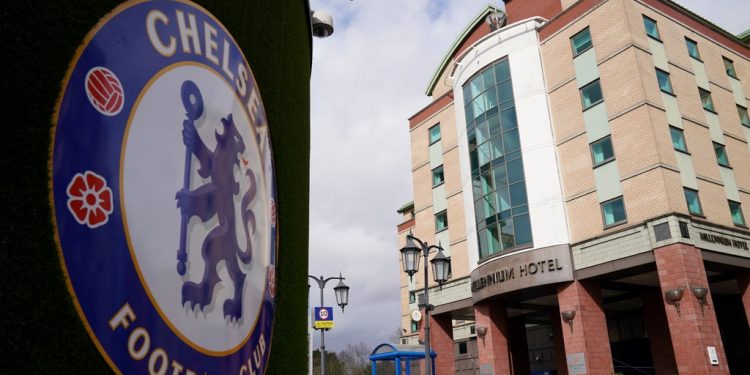 Chelsea suitors’ anxious wait to discover the shortlist of preferred bidders for the Premier League club looked set to drag past Tuesday night.

New York merchant bank the Raine Group will continue compiling the bids to whittle down a shortlist as tight as three offers.

The interested parties bidding for the Blues had initially expected to receive word on their candidacy on either Monday or Tuesday.

But the complex nature of the bids and sheer volume of information left Raine opting to take more time putting together that shortlist.

By close of business in the UK the various bidders for Chelsea had not received an update on the process. And Raine could require several more days yet to finalise the list.

Roman Abramovich put Chelsea up for sale on 2 March. The Russian-Israeli billionaire was understood to have already received several big offers for Chelsea within days of putting the Blues officially up for sale.

And that brisk interest has continued unabated, despite the 55-year-old being sanctioned by the UK government on 10 March.

Downing Street claimed to have proven Mr Abramovich’s direct links to Vladimir Putin, freezing all his UK assets including Chelsea, with the Blues operating under strict government licence.

Mr Abramovich cannot profit from Chelsea’s sale, but he had already pledged to write off the club’s £1.5bn debt.

American-backed bids from Los Angeles Dodgers part-owner Todd Boehly and Chicago Cubs owners the Ricketts family are among the front-runners to take over at Stamford Bridge.

The Ricketts family are understood to remain confident with the terms of their bid.

Sir Martin Broughton and Lord Sebastian Coe have another potent offering lodged, with strong financing secured and both front men proud of the submission.

British property tycoon Nick Candy has also pushed hard with his bid for the Blues, even increasing his offer “significantly” on Monday.

Saudi Media Group is another of the bids understood to carry clout, and Raine are moving quickly through the process given Chelsea’s need for a fast transfer of ownership.

Raine will put their eventual shortlist to the government for oversight, but Chelsea’s current board will have already had a hand in the process by that point.

Mr Abramovich was clear from the start on seeking a successor capable of continuing the Blues’ sustained success.

The influence of Chelsea’s board, in conjunction with Raine, in the shortlisting process should go some way to allaying Blues fans’ understandable current fears.

“We need to let the board take the time to get it right,” said Ms Hayes. “That is right, that is the process and due diligence takes place and not rushing that decision so we get the right owner into the club.

“For me the priority is getting fans back into the stadium. For me I don’t know why this hasn’t happened yet.

“Surely we have to create a situation with a separate bank account so that the fans can come?

“I don’t think we should penalise those people, even within this situation.”