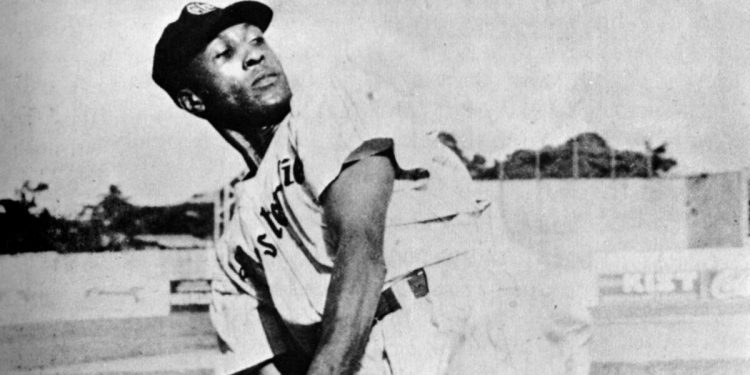 
It was only one at-bat, but it changed the direction of Reggie Smith’s career.

Long before he was a World Series champion, a seven-time All-Star or 17-year major league outfielder, Smith was a young player growing up in South Los Angeles, trying to become a switch-hitter during his high school years.

One day early in the process, he came to the plate with men on base. Even though a right-handed pitcher stood atop the mound, Smith initially stayed on his familiar right-handed side of the plate, the place he felt most comfortable for a leverage at-bat.

But then, Smith’s coach called for time. As he did for so many players, over so many years, Chet Brewer needed a moment to impart some wisdom.

In an era of change for baseball, just a couple of decades after Jackie Robinson broke the sport’s color barrier, Smith was one of many young Black players who came out of South Los Angeles in the 1960s and broke into the big leagues.

Most of them were coached by Brewer, a former Negro Leagues star who became an influential — if often overlooked — part of baseball’s history. He helped dozens of players (most of them Black) reach the majors, cultivating a generation of baseball excellence that resonates to this day.

Smith, now 77, cited one moment specifically during a recent phone call to epitomize Brewer’s influence, recalling his conversation with Brewer after he’d abandoned his switch-hitting experiment.

“What are you doing?” Brewer asked.

“Well, there’s a chance for me to drive in the run,” Smith answered.

Brewer’s response: “No. If you’re going to be a switch-hitter, you have to learn in these situations.”

So Smith stepped to the other side of the plate … and hit a home run on his next swing, sending the ball bouncing onto Century Boulevard, beyond the right-field fence.

“I thought by hitting right-handed, we had the best chance to win,” said Smith, who went on to be one of the best switch hitters of his generation. “But my development was more important than the game at that point. And I never forgot that.

“That’s the kind of man and kind of coach he was, making sure that if we chose to play professional baseball we were prepared.”

Despite losing a couple of toes when his foot was run over by a trolley car as a kid, Brewer became a promising young pitcher while growing up in Des Moines.

His first taste of professional experience came with a barnstorming team that traveled with a carnival and minstrel show. By 1925, he reached the Negro Leagues with the Kansas City Monarchs, the beginning of three-decade career that has earned him consideration (but not yet an induction) for the Baseball Hall of Fame.

Dave Roberts, Reggie Smith and Fred Claire reveal how the Dodger legend has influenced their lives.

At the height of the Negro Leagues’ popularity, Brewer was one of its best pitchers. Despite making just $150 per month most of his career, he had a 3.46 earned run average, according to Baseball Reference, and won an ERA title in 1929 with a 1.93 mark. Though he bussed from town to town, facing segregation every stop along the way, he racked up a .597 winning percentage that ranked 10th all-time among Negro League pitchers, according to the Hall of Fame.

Sportswriter Jim Murray called Brewer’s curveballs “one of history’s best” while writing for the Independent Journal in 1967, adding: “A pitcher who should have been in Yankee Stadium was in a canebrake in the Philippines, a sand bar in Santo Domingo.”

Near the end of his playing days, Brewer served as a player-manager in 1945 for a California Winter League team. His shortstop that season: Robinson, who was less than two years away from his Dodgers debut.

Though Robinson and other younger star Negro League players of that era went on to major league careersBrewer was part of a much larger group that never got an MLB opportunity.

“He felt like [his playing career] was vastly underrated,” Dixon said.

It didn’t chase Brewer away from the sport, though.

Instead, he bounced around during his final few years on the mound, playing for teams in Puerto Rico, Panama and the last vestiges of the Negro Leagues in the United States. Then, in the late 1950s, he took a job scouting for the Pittsburgh Pirates and settled in Los Angeles.

There, he found his second calling coaching young players in the heart of the city.

When a family friend first introduced Smith to Brewer in 1960, the future All-Star was an undersized shortstop, his physique making little in the way of a first impression.

But Brewer, then coaching a semipro team of minor-league players and ex-Negro League professionals, gave Smith the chance to work out anyway. Even among a group mostly of grown men, Smith’s strong arm and surprising pop stood out. Brewer gave him a place on the bench.

Smith’s first game with the team came two weeks later, at a field in South Park against another semipro team. When Smith came to the plate, the opposing third baseman moved in. At first Smith was rattled. Then he heard Brewer’s voice ring out from the dugout.

“You better back up,” he shouted.

Sure enough, Smith rifled a line drive past the third baseman’s head for a double. From then on, Smith was a regular on Brewer’s teams. And over the next few years, the coach began to bring more players Smith’s age, focusing on developing a new generation of players from the predominantly Black neighborhoods of South L.A.

“The young players who had that desire to play professional baseball, he wanted to make sure that we were prepared,” Smith said. “Because at that time, the feeling was you have to be twice as good as the white player.”

Indeed, Brewer quickly developed a pipeline of talent that led straight to the majors. At one point, his team featured Smith, who played in MLB for 17 years, largely with the Dodgers and Boston Red Sox; Bob Watson, a two-time All-Star with the Houston Astros who also became the first Black general manager to win a World Series; Davey Nelson and Dock Ellis, who each earned All-Star selections in their lengthy careers; and several other future MLB players including Willie Crawford, Enos Cabell, Bobby Tolan and Leon McFadden.

Another future big-league star around that squad: Eddie Murray, who was the bat boy while his big brother, Charles, played for the team.

“I remember only losing one game in about three years,” said Dennis Gilbert, who was one of the handful of white players on the team and went on to have a lengthy career as an MLB agent and front office executive. “And that was when we faced a pitcher by the name of Rollie Fingers.”

Brewer commanded respect from his players — they referred to him as “Mr. Brewer,” a title Smith and Gilbert continue to use to this day — but also showed them compassion.

Smith said Brewer became so close to him and his family, his parents trusted the coach to pick Smith up from their home on Sundays to take him to practice while they went to church.

Gilbert remembered Brewer steering the team through the turmoil of the Watts riots, when smoke billowed in the distance during one of their games.

“He could be the most respected person I’ve ever met in my life,” Gilbert said. “Everybody loved him.”

At the end of his life, Dixon said, Brewer didn’t mention his lineage of players much. The track record spoke for itself. But after he struggled so mightily as a player, seeing the success of his pupils brought deep satisfaction, a reminder of how far the sport had come — and how much he’d contributed to its progress.

“[The Negro Leagues players] had a good time back then, they enjoyed what they did,” Dixon said. “But [he was] developing ballplayers and sending them to the big leagues, and now they can take care of their families and do things that Negro League players could never do.”

Dixon added: “Chet would always say, ‘Those were the good old days, but I’d rather have these.’ ”