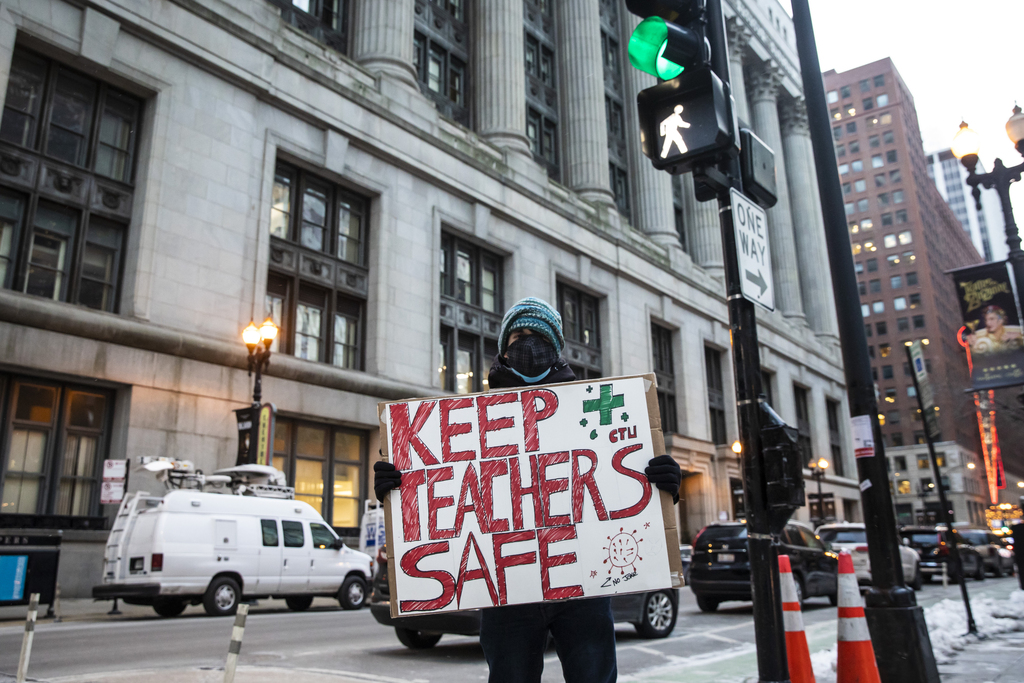 CHICAGO — Hundreds of thousands of Chicago students remained out of school for a second straight day Thursday after leaders of the nation’s third-largest school district failed to resolve a deepening clash with the influential teachers union over COVID-19 safety protocols.

The Chicago Teachers Union, which voted to revert to online instruction, told teachers to stay home Wednesday during the latest COVID-19 surge while both sides negotiate.

The move just two days after students returned from winter break prompted district officials to cancel classes. Chicago Public Schools, like most other districts, has rejected a return to remote learning, saying it worsens racial inequities and is detrimental to academic performance, mental health and attendance. District officials insist schools can safely remain open with protocols in place.

There has been little sign that either side is softening — the district and union both filed labor complaints with the state this week.

Chicago Mayor Lori Lightfoot accused the union of politicizing a pandemic, while the union’s president, Jesse Sharkey, dubbed her “Lockout Lori,” because teachers haven’t been able to log into remote-learning systems since early Wednesday.

The pattern is familiar for Chicago parents in the largely Black and Latino district serving about 350,000 kids. The powerful teachers union has threatened to use their right to strike during contentious bargaining over school conditions for decades, and last walked out of schools in 2012 and 2019, when talks with the city broke down.

Lightfoot’s first term as mayor has been marred by three high-stakes clashes with the teachers’ union, including the 2019 strike that lasted for 11 school days and disagreement over COVID safety protocols to begin the 2020 school year.

“Enough is enough,” Lightfoot said during an interview on MSNBC on Thursday morning. “I’m tired of the Groundhog Day appearance of everything that goes on with the Chicago Teachers Union leadership. We need partnership, we don’t need conflict. ”

“We have rights to safety and we’ve been at the bargaining table for 20 months to secure those rights,” he wrote in an email to members. “We haven’t shifted the goal posts one bit; in fact, we’ve been saying the same thing for months: Please, work WITH us to set up comprehensive testing, work with us to vaccinate students, and work with us to establish basic guard rails.”

The district argued in a complaint to the Illinois Educational Labor Relations Board that the union’s actions are an illegal work stoppage, and sought a cease and desist order and a ban on future illegal strikes.

The union’s complaint argued members have a right to refuse “hazardous work assignments” and accused the district of an illegal lockout by canceling classes and barring access to remote-teaching tools. It asked the board to order Chicago schools to allow remote instruction until a new safety agreement is reached.

It was unclear Thursday when the board may act, but the process could take weeks to play out.

In December 2020, the board rejected the union’s request to block the district from resuming in-person instruction in January 2021.

Talks are focused on metrics that would trigger school closures and more COVID-19 testing. For instance, school leaders support remote learning only at the classroom and school level when there are outbreaks, as has been the case this year, versus a districtwide switch to remote learning which the union supports.

Schools CEO Pedro Martinez told reporters Wednesday evening that students may be able to start returning to schools on Friday for services such as tutoring or counseling, depending on how many staff members show up.

Andy Cohen explains why he and Anderson Cooper will never date

Andy Cohen explains why he and Anderson Cooper will never date