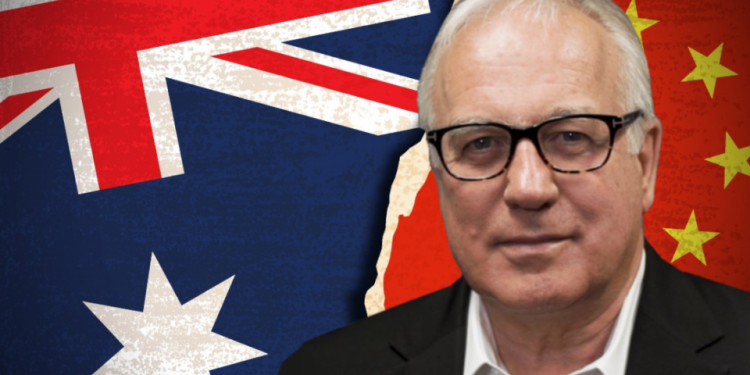 
It looks like Australia will finally have to confront the problem of trading with a repugnant dictatorship, unless China dumps its “no limits” partnership with Russia.

If Putin prevails in Ukraine by murdering and/or subduing its population, or even if he doesn’t, and China continues to be Russia’s ally, then the Australian government and the companies that trade with China will have a very difficult problem.

As Peter Hartcher eloquently put in his book Red Zone: “Australia did not want to confront reality. It was too deeply committed to the dream, to the opioid temptation of effortless, limitless profit, to the lotus flower of China’s allure.”

That reality will now have to be confronted.

At this stage, Prime Minister Scott Morrison is leaning into it, declaring in a speech on March 7 that “a new arc of autocracy is instinctively aligning to challenge and reset the world order in their own image”.

“We face the spectre of a transactional world, devoid of principle, accountability and transparency, where state sovereignty, territorial integrity and liberty are surrendered for respite from coercion and intimidation, or economic entrapment dressed up as economic reward.”

China is making two mistakes that will have massive repercussions for Australia: Aligning itself with Russia, and keeping up the effort to stamp out COVID-19.

Putin’s Russia is now so toxic that China is in danger of giving itself a taste of Russia’s medicine and becoming economically ostracised as well.

When asked about that on Wednesday, PM Scott Morrison said, without the slightest hesitation: “We will move in lockstep with our partners and allies on these issues”.

If Russia’s armed forces continue to flounder, China may be forced to help, making Xi Jinping as much a global pariah as Putin.

But in some ways, if Russia succeeds in Ukraine, whatever that looks like, it would be even more disastrous, since China would be forced into one side of a new bipolar world that it didn’t choose and didn’t want.

As leader of one of the greatest mercantile nations in history you’d think the last think Xi Jinping would want would be to suddenly withdraw from the global trading system because he supported a mad adventurer like Putin because he happened to be an autocrat like himself.

So, China’s leaders are in a bind and have a very big decision to make, one that has enormous implications for Australia’s future.

The other thing that China’s leaders are in the process of messing up is the response to the pandemic.

Continuing to pursue a zero-COVID policy while the rest of the world learns to live with the virus is hard to understand, given the damage such a policy will do to its economy, and to the standing of the Communist Party.

But it may have something to do with the China’s vaccine, Sinovac.

China has refused to use the new mRNA vaccines produced by BioNTech and Moderna, even though they are proven to be much better than Sinovac. Instead, they have pushed false propaganda that Sinovac is the world’s best vaccine.

As a result, the government has been trumpeting its success with non-medical means to suppress the virus and having just about the lowest number of cases and deaths in the world.

It would be a terrible humiliation now for China to admit failure and line up to buy vaccines from Pfizer and Moderna, while allowing case numbers to rise to the levels now accepted elsewhere in the world, so they won’t do it.

That means ongoing lockdowns, with all the economic consequences that go with that.

But even before the Ukraine invasion and the jump in Omicron cases, China was suffering a serious capital outflow as global investors started turning their backs on Xi Jinping.

The providers of capital who now run the financialised world have been telling Xi Jinping with their actions that they don’t like the shift in governance of China that he has been driving.

Last week, Vice Premier and top economic policymaker Liu He came out with a series of announcements designed to win back the markets.

But it will take more than that.

Since Deng Xiaoping reoriented China towards economic growth to bury the horrors of the Cultural Revolution, everybody has understood that there was an implicit deal between the Chinese Communist Party and the Chinese people, and by extension the capital markets: We’ll pursue economic growth and let you get rich if you let us stay in power with no elections.

But at the start of his second term in 2017, Xi Jinping declared that the overriding pursuit of economic growth was over.

Instead, Xi talked about political and social goals, including a massive crackdown on graft (which basically seemed to be about eliminating political rivals) and a dramatic tightening of central control, and of Xi’s own power.

In early 2021, when China was doing well controlling the pandemic, Xi began a full restructuring of Chinese society, and its economy.

There was a crackdown on financial entrepreneurs, especially in the real estate sector and technology, and a lot of education firms were simply shut down.

By the end of last year, the economic and financial market effects of all this had started to get serious, and while officials were able to shrug off the collapse of internet company share prices and defaults by property developers as specific to those companies, they couldn’t paper over the sharp slowdown in economic growth.

As a result, well before the Russian invasion of Ukraine and the rise in Omicron cases, capital was leaving China.

It was effectively a plea from global capital for Xi to bring back the old China focused on growth maximisation and less on political control.

But it’s hard to imagine that old China being brought back under Xi. If anything, the opposite will occur: China’s new Mao Zedong has shown that his answer to any problem is to double down.

So, Australia’s most important customer is at a crossroads, which means we are too.